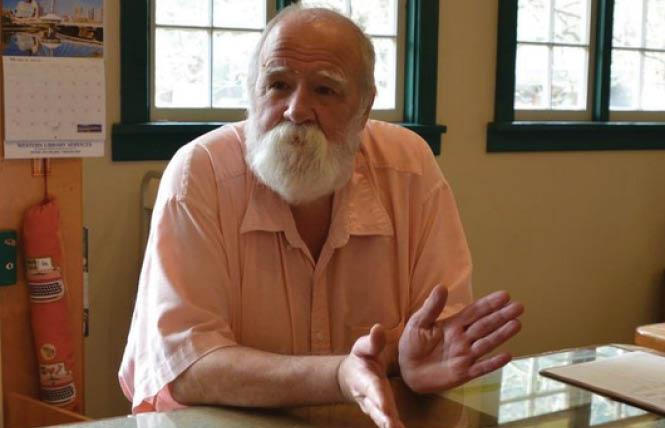 Richard Labonte, who once managed the LGBTQ bookstore A Different Light in San Francisco's Castro neighborhood, died March 20 at his home in British Columbia, Canada after a battle with stomach cancer. He was 72.

Mr. Labonte was a co-founder of A Different Light with his then-partner Norman Laurila, according to an article on SF Gate. The Castro store opened in 1985, following the first location in Los Angeles' Silver Lake neighborhood. Mr. Labonte became the manager of the Castro store in 1986. The store closed in 2011.

Throughout the 1990s, A Different Light became a center of queer culture in California and New York, places where authors and fans met for readings and informal receptions, an online obituary noted. Over 22 years, Mr. Labonte combined his bookselling career with his editorial expertise to connect authors with thousands of new readers.

"Richard Labonte was a gentle lion," gay nightlife producer Marc Huestis wrote in a message to the Bay Area Reporter. "He made A Different Light an important community space for smart people. He hired our queer guiding lights, many who went on to significant careers, and some who would have had a hard time finding a good job elsewhere. And the staff made it so much fun to spend time in the store and catch up on the latest with Justin Vivian Bond, or be clued into the hottest new book release by Alex Chee."

Huestis, who produced events at the Castro Theatre, noted the store served in some ways like a community center.

"Of course, many of us didn't buy books, but Richard didn't seem to care. He just loved fostering that creative atmosphere," he wrote. "And as a businessman, Richard was beyond fair. A Different Light was the ticketing outlet for my early extravaganzas at the Castro. He didn't charge an extra fee to the customers, and took a ridiculously low percentage from me for his services. I think again he was just happy it brought traffic into the store. And I actually looked forward to our meetings to close the books, because he was such a sweet presence. He exuded a calming eminence and that was such a rarity in business. Hopefully his historic importance will only increase with time. He deserves a legacy plaque outside the store."

Queer activist Tommi Avicolli Mecca worked at A Different Light for almost 10 years, starting out as a bookseller and rising to assistant manager. He said that Mr. Labonte had a love for LGBTQ books and literature.

"That bookstore was the most supportive place for LGBTQ writers — it didn't matter if they were well known of not," he told the B.A.R. in a phone interview. "If you were just beginning to write, you could have readings there."

Of course, well-known queer writers also made appearances at A Different Light, such as lesbian tennis great Martina Navratilova and gay Olympic swimmer Greg Louganis, when people would line up down the street waiting to see them, Avicolli Mecca recalled.

"At the same time, there was opportunity for those just starting out," he said.

Mr. Labonte decided to start a readers and writers conference, and put Avicolli Mecca in charge. "We talked it out," he said, and came up with a conference that was held for several years.

Most of all, though, Mr. Labonte loved to read, Avicolli Mecca recalled. He worked to carry books in other languages at the store in an effort to show that queer literature was not just published in English.

In a Facebook post and in the interview, Avicolli Mecca talked about Mr. Labonte's compassionate side, such as helping to feed homeless young people in the Castro after the dot-com bust in 2000.

"Richard was also a man of compassion. I remember the cold, rainy morning he told me to go get some soup for the obviously homeless young gay man hanging out among the shelves in the back. I remember him at Simply Supper serving meals to those who came to MCC church for something to eat. For a while, the bookstore sponsored the Friday meal," Avicolli Mecca wrote on Facebook, referring to the old Metropolitan Community Church in the Castro.

"Feeding people was the logical and compassionate thing to do," Avicolli Mecca said. "That's just the kind of man he was."

Prior to coming to the United States, Mr. Labonte had been a journalist in Canada and in 1980 was one of the first to come out as gay when he wrote a column in the Ottawa Citizen. "That was a hard piece to write — harder than almost anything I ever wrote," Mr. Labonte recalled in a 1992 Citizen story about the column, according to the paper's recent obituary on him. "The main thing that I was trying to say was simply that gay people are a part of the fabric of life. You may not know who they are or where they are, but they're certainly there."

Mr. Labonte was born in Edmonton, Alberta on July 5, 1949 and came to Ottawa to attend Carleton University, where he was editor of the student newspaper, now called The Charlatan, the Citizen obituary stated. He was hired in 1971 at the Citizen, where he worked as a writer and editor, mainly in the arts department.

Mr. Labonte is survived by his husband, Asa Liles.

Updated, 4/26/22: This article has been updated to include additional comments from Tommi Avicolli Mecca.