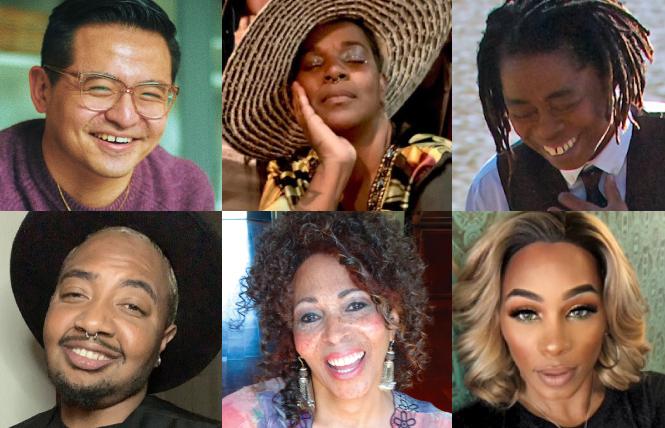 San Francisco Pride has released its list of community grand marshals for this year's Pride parade and celebration in June, its first live event since the outbreak of the COVID-19 pandemic in 2020.

Six individuals and one organization were announced as community grand marshals, to be recognized during the 52nd annual San Francisco Lesbian Gay Bisexual Transgender Pride Celebration and Parade. The theme for the June 25-26 event is "Love will Keep Us Together."

"As we return to an in-person celebration this June, SF Pride is thrilled to honor this exceptional group of individuals and organizations who have contributed greatly to the San Francisco Bay Area LGBTQ+ community and to society at large," said Suzanne Ford, a trans woman who is San Francisco Pride's interim executive director. "Each of this year's grand marshals are local heroes in their own right and leaders in the efforts towards inclusion, acceptance, and equality for all LGBTQ+ people."

The grand marshals were selected by the Pride membership, board, and the public.

"These individuals and organizations have been chosen by their own community to be honored for their great work," stated San Francisco Pride board President Carolyn Wysinger in an email. "As a past honoree, I know that means so much to these community members to be recognized by the very community they give of themselves to serve. My goal since 2019 has been to honor Black LGBTQ community members who work tirelessly and often thanklessly to serve Black queer and trans people. This year's selection includes many amazing Black LGBTQ individual honorees.

"I am elated to honor the African American Arts & Cultural Complex for their work as a legendary space who is using their platform in the black community to center the Black queer and trans community," Wysinger added.

Trans and Black Indigenous and people of color, or BIPOC, continue to stand out in this year's class of grand marshals.

Melanie DeMore was chosen by SF Pride's membership. She is a Grammy-nominated singer/composer, choral conductor, music director, and vocal activist.

On SF Pride's website, she stated, "My first experience of SF Pride was singing 'Over The Rainbow' on the main (1990?) stage."

Vinny Eng, the public poll choice, serves on the board of Openhouse, an organization focused on LGBTQIA+ seniors, and also co-chairs the policy committee of the Alice B. Toklas LGBTQ Democratic Club Board of Directors.

"Serving as grand marshal of SF Pride fills my heart with incredible gratitude for the community elders who fought before and alongside our current generation. Love as we know it today is possible because they stood unwavering in their truth in pursuit of a better world for all of us," Eng told SF Pride.

Amber Gray, the SF Pride board choice, is a group facilitator and public service aide for the City and County of San Francisco's Community Behavioral Health Services.

"Pride is a lifeline for our community," Gray stated on the SF Pride website. "It's the one day of the year when we celebrate the LGBTQ community. It's more about being around nonjudgmental people and having memories together. I am all about our community. We deserve to have a sense of community even for just that weekend."

"To be chosen as community grand marshal is a humbling experience as a Black man, but also a man of transgender experience," Moreland told SF Pride. "I've done so much work around creating spaces, making necessary noise, and bringing my community members to the table, but never expected to be honored at this capacity. To be chosen and to experience this is surreal and is a historical and important step to visibility."

Mellanique "Black" Robicheaux, SF Pride board choice, is a 30-year veteran DJ who couldn't play in queer clubs because of racism so she paved her own way in the 1990s hip-hop scene by opening her own clubs and producing memorable parties like Tight, Rise, Dream EZ, Hella Gay, and Ships in the Night as a result.

"As a Black queer woman DJ, I have used music to bring people together for the past 30 years, and it is an honor to represent this beautiful community as one of the community grand marshals for 2022 gay Pride," she stated on the SF Pride website.

This year's honored organization and public poll choice is African American Art & Culture Complex, a Black arts and cultural institution in the Fillmore. The arts and empowerment organization provides "space for Black creatives, healers, and activists all over the Bay Area to create art, host provocative conversations, and bring people together in joy, mourning, and political power."

"The African American Art and Culture Complex stands in gratitude for this honor," the AAACC team stated on the SF Pride website. "We welcome everyone to come into the fullness of who YOU are. We consider this a season of joy and liberation, as the AAACC family is committed to being a safe space for all Black people and the ways we live, identify and love. As SF Pride organization grand marshal, we are committed to amplifying safety and the full self-expression of the BIPOC LGBTQIA+ community and ask the broader community, 'How are you ensuring, activating, and implementing the same?'"

"It's an unexpected and incredible honor," Horne told the Bay Area Reporter in a phone interview, although she noted "it's a recognition that five years ago I probably wouldn't have received."

A woman with a storied personal history of her own — the late disco chanteuse Sylvester convinced her back in the 1970s to move from Hawaii to San Francisco where she has been ever since — Horne has been researching and documenting the lives of trans women of color. Within 10 minutes of a phone interview with the B.A.R., she had dropped the names of three notable examples — Mary Jones, Sylvia Rivera, and Sir Lady Java. She dove into each of their stories, happily sharing their histories and why they are important today. She was notably less open about one aspect of her own life, however.

"Do you mind if I ask your age," a reporter asked her.

The honor of grand marshal is one Horne plans to use to further the visibility of trans women of color.

"Historically, black trans women are overlooked," she said, "It's like the Stonewall Rebellion. It was Black trans women who threw the first bricks and fought with the police. But when the story is told, it was white, gay guys who did it."

But, at the moment, Black trans women are "trendy," she observed, pointing out examples like actress Laverne Cox and author Janet Mock, but that hasn't diminished the need for her research work. As a woman of privilege herself, she said — she grew up in a middle class Black household in Los Angeles — Horne said she believes she must assist her community in the process of "elevating themselves."

"I'm going to just continue to do the work I've always been doing," she said.

For more information on SF Pride, visit its website.