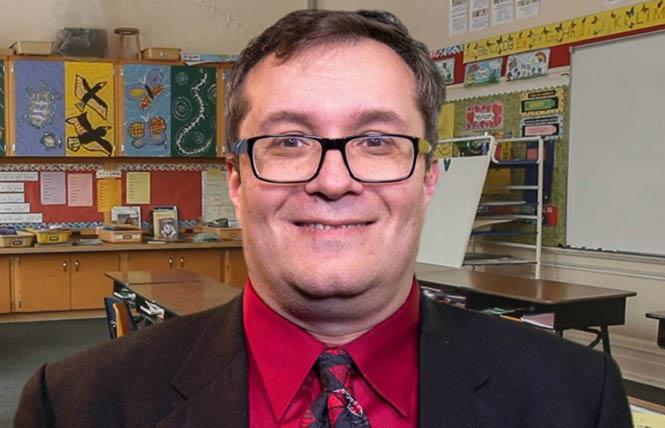 High school government and history teacher Gary Blenner may be a long shot candidate to be elected California secretary of state this year. Nonetheless, he is breaking through another pink political ceiling in the Golden State.

Blenner is the first known gay Green Party candidate to qualify for a statewide primary race in California. He is one of five LGBTQ statewide candidates this year.

"I haven't received any negative comments about it; haven't got any positive comments either. I am running on my ideas," said Blenner, 55, who lives in Antelope, outside of Sacramento. "I had always been interested in running for secretary of state. One of my areas of interest is in electoral reform."

Fellow Green Party member Veronika Fimbres, a transgender nurse from San Francisco, is running in the primary race for California insurance commissioner. She is one of eight challengers running against gay Insurance Commissioner Ricardo Lara (D).

Four years ago Lara became the first LGBTQ person elected to a statewide office in the Golden State. He has had a bumpy first term and is facing a tough reelection campaign.

He is one of four Democrats seeking the open seat, as Controller Betty Yee is termed out of office this year. Among the quartet are former San Francisco supervisor Malia Cohen, currently on the state's Board of Equalization, and state Senator Steve Glazer (D-Orinda), while Republican Lanhee Chen is also vying to survive the primary and advance to the November ballot.

The first known out candidate for statewide office in California was Tony Miller, a gay man appointed to fill the vacancy created when March Fong Eu resigned as secretary of state. He lost his 1994 race for a full term. Two decades later fellow gay Democrat John A. Perez, then serving as Assembly speaker, fell short in his bid to become the state's controller.

Blenner is facing an uphill battle this year as he is running against Secretary of State Shirley Weber, the first African American to hold the statewide office. Governor Gavin Newsom tapped the former Democratic assemblymember from San Diego in 2020 to fill the vacancy created when he appointed Alex Padilla as California's first Latino senator in the U.S. Congress. Padilla and Weber are now both seeking full terms this year in their elected positions.

With four Republicans and one independent candidate also on the June 7 primary ballot for secretary of state, Blenner is hopeful his GOP opponents will end up splitting the vote from their party members enough to allow him to be one of the two top vote-getters to advance to the November ballot. He is part of the Left Unity Slate that the statewide Green Party formed with the Peace and Freedom Party this year.

In order to do so he is planning to run television ads on cable targeted to voters in certain cities across the state, such as San Francisco, Oakland, and Berkeley, who may be supportive of his platform.

"What I am fighting for in my candidacy is to try to open up the process and not to keep people off the ballot," said Blenner. "I want to give people realistic choices in terms of how to vote in the future."

He is a big supporter of ranked-choice voting, noting its use not only benefits candidates from all political parties but also reduces the cost to hold elections. And he wants to change how campaigns are funded.

"It's important to get PAC and corporate money out of campaign finances," said Blenner, referring to political action committees. "I would like something in our state constitution that ends corporate personhood."

He also backs a proposed ballot measure that would change how members of the state Assembly are elected. Rather than having 80 separate Assembly seats, the idea would be to create eight large regional districts where 30 candidates would be elected to serve, thus increasing the number of assemblymembers to 240.

He pointed to a Democratic lawmaker's failed attempt this month to try to ban cities from using ranked-choice voting, such as San Francisco and Oakland, as one example of how some Democrats want to curtail voting rights.

"What I would say to Democrats is if you are voting for the Democratic Party because you think it is idealistically pure and progressive, they are not. You should look to the Green Party as the true progressive alternative in the state of California," said Blenner.

Born in New York City's Queens borough, Blenner at age 13 moved with his parents to Fremont in the Bay Area. He graduated from UC Davis in 1988 with a double major in political science and history.

After two years at Lincoln Law School, a private college in Sacramento, Blenner dropped out to become a schoolteacher and earned a master's degree in education from National University. He has taught at the San Juan Unified School District since 1994.

He first disclosed his being gay to a friend at the age of 26, having led a closeted life up to that point. He joined the Green Party after the 1988 midterm elections, though registered as a Democrat from 2012 to 2016 in order to vote for U.S. Senator Bernie Sanders (I-Vermont) as he sought the party's presidential nomination.

He currently is co-coordinator of the Sacramento County Green Party, having helped to revive the local party chapter.

This isn't Blenner's first time seeking public office, but it is as an openly gay candidate. Blenner twice ran unsuccessfully for county supervisor in 2012 and 2016.

In 2006, he was elected to the school board for the Center Joint Unified School District in Sacramento County but lost his bid for reelection four years later.

"I think my being defeated in part was because I took the position that students were to be exposed to LGBTQ+ ideas in the 10th grade health and safety curriculum. Evangelical groups didn't like that," recalled Blenner, who had also tried to get his board to adopt a resolution in support of same-sex marriage amid the 2008 election fight over Prop 8, which banned such nuptials in California until it was later overturned by the courts. "My neighborhood was more conservative than it is now."

To learn more about Blenner, visit his Facebook page.