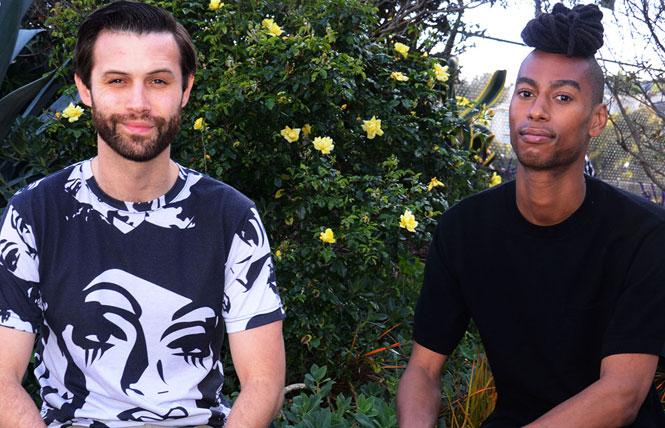 Car collisions often result in dented fenders, an exchange of insurance information, or worse. Sometimes, though, the outcome is a little more hopeful.

John Xavier Moore, 31, and his business partner, Paul Walker, 29, both queer, were in a ride-share vehicle in 2019 when their driver ran a red light. The injuries they suffered were enough to make them worry about the longer-term repercussions of prescription opioids, a direction they very much wanted to avoid. So they came up with another approach: a cannabis-based balm. One they made themselves.

"The idea for the balm came after the accident, infusing full spectrum oil into balms similar to ones we were already using as a means of alleviating soreness and pain," said Moore, who was the photography director of an Oakland-based organic beauty brand at the time. They ended up calling it Bay Balm and the company, Bay Remedies.

"We are fundraising through Mainvest to go into legal production," Walker, a body worker and massage therapist, explained in an email. They get their raw material from a grower in Santa Rosa, but their five-year plan is to raise the money to open a dispensary.

"We want to deal with the public directly," said Walker. "The money from the campaign will allow us to go into a white label agreement with Enlightened Studio in Oakland to produce our product. We shall sell the product to dispensaries, but use their distribution license to transport the product throughout the Bay Area for delivery."

White label agreements are those between businesses providing goods or services to other businesses. White label manufacturing is a legal protocol allowing goods and services to be sold and rebranded as another company's own brand.

In those early days they offered the balm to family members and friends to try, said Xavier, after having it tested at a lab — Cannasafe — in Hayward. There, it was tested for potency, terpenes (volatile unsaturated hydrocarbons found in the essential oils of plants), and the absence of pesticides.

Those early batches, too, were made "originally using raw flower," Moore said. Now, they're made with a full spectrum extract, which utilizes the full profile of the weed including THC, CBD, and numerous other compounds.

But Moore and Walker are concerned with more than just the technicalities of testing. Moisturizing properties and aromatics matter, too. And that has paid off as far as one of their biggest fans is concerned.

Drag artist Juanita MORE!, loves the product, she said. Given the physicality of performing in drag, she needed something to handle the pain she deals with as a result.

"Being in drag is painful," said MORE! "It can be so painful to be in heels. I wanted this balm so bad. So, yeah, I was definitely from the start a big supporter."

They probably would have had her support anyway. "I love both of them," she said. "I consider both of them my children," she added, laughing. MORE! shares an even deeper connection with Moore, who also performs in drag as Newoncé Gazelle. "I'm Jonathan's drag mom," MORE! added.

Walker said that MORE! has helped them in various ways.

"Juanita MORE! has shown us the significance of building community and how you do so," said Walker. "She has shown us the power of collaboration with artists and public figures to address issues in the community."

But drag artists with sore feet aren't the only folks Moore and Walker are aiming for. The balm is good for new tattoos and, particularly, for trans folks recovering from surgery, they said.

"We have had the honor of sharing our topical product with trans clients who have recently undergone top surgery or a B.B.L.," said Walker, referring to a Brazilian butt lift. "We have seen what the opioid crisis has done to our country. We wanted to offer something that is non-addictive while folks are recovering. Pain management should not be limited to just pharmaceuticals. Bay Remedies is an inclusive LGBTQIA [company] that wants to create an elevated narrative about pain management and includes trans folks who are recovering from surgery. We have yet to see this in the market."

The two entrepreneurs are determined that their product will make positive contributions to the community. Besides using locally sourced, organic ingredients, they work with LGBTQ artists in their promotional outreach, and plan to give 3% of their profits to the Q Foundation. They're also inspired by, and plan to contribute to, Blk Canna Joy, "a social justice lifestyle collective, supporting holistic rehabilitation for black people through community based projects," according to the group's website.

They were encouraged early on to look to the Oakland-based collective, which distributes boxes of product to low-income folks who might not otherwise have access to the medicinal aspects of cannabis.

"We'll definitely be turning over some of our products to them for their boxing program because they were so supportive of us in our infancy," said Moore.