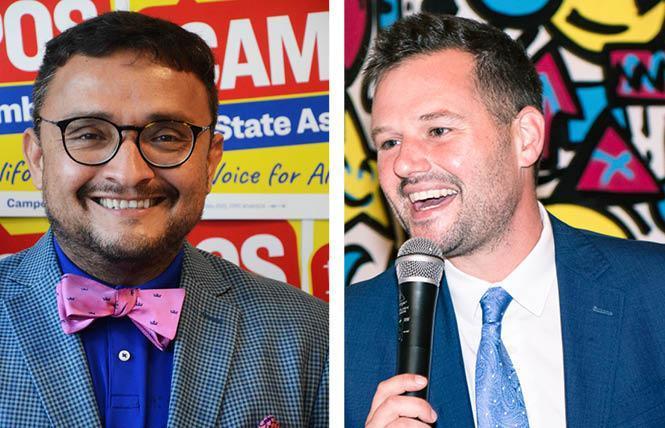 District 6 Supervisor Matt Haney declared victory Tuesday in the special runoff election for San Francisco's vacant 17th Assembly District seat based on the initial vote count. Trailing in second was David Campos, a gay man who is a vice chair of the California Democratic Party.

Haney took first place with 64% of the vote-by-mail ballots that the elections department received and processed before Election Day, while Campos received 36%. With 3,306 votes received from polling places where people cast their ballots in person Tuesday added in, Haney's total vote count stood at 38,916 votes and Campos' was at 22,567 votes.

Because most ballots were expected to be mailed in ahead of election day, Haney thanked voters for electing him to the Assembly seat representing the city's eastern neighborhoods as soon as the first election results were posted.

"First results are out: We're up by over 27 points. We won," tweeted Haney. "Thank you so much to San Francisco voters, & to all of our staff, volunteers, donors, endorsers, & everyone who worked so hard over the last 6 months."

Campos told his supporters as the first numbers came in that "it doesn't seem like we are going to be able to win this race."

The progressive politicians were the top two finishers who advanced out of the February 15 election to fill the seat vacated by David Chiu, who in November became San Francisco's first Asian American city attorney. In that contest Haney had also placed first.

They have also both qualified for the June 7 primary race for a full two-year term in the Assembly seat. Campos will now have to decide if he wants to continue to compete for the seat or return to his job as chief of staff to San Francisco District Attorney Chesa Boudin, from which he has been on leave from while campaigning for the Assembly.

Haney, with endorsements from former Obama administration staffer Bilal Mahmood, who placed third in the February election for the Assembly seat, Mayor London Breed, the San Francisco Chronicle and San Francisco Examiner, was considered the frontrunner going into the April 19 runoff. He also benefited from weeks of televisions ads bought by labor groups that also backed him.

Gay state Senator Scott Wiener (D-San Francisco), who had not endorsed in the race, congratulated Haney on his win in his own tweet shortly after the first election results were posted.

"Serving in the Legislature is a huge honor & creates major opportunities to move the dial for our community. I look fwd to working together to advance a pro-housing agenda + other critical needs. Welcome, colleague," wrote Wiener.

Campos had secured endorsements from the Bay Area Reporter, the Bay Guardian, and the Harvey Milk LGBTQ Democratic Club. City College of San Francisco trustee Thea Selby, who placed fourth in the February election, threw her support behind Campos.

Haney will vacate his seat on the Board of Supervisors in order to join the state Legislature. It will be up to Breed to appoint someone to serve out the remainder of his term through the end of the year.

Whomever she selects will be seen as the frontrunner in the race on the November ballot for a full four-year term. Among the list of possible appointees is Haney's chief legislative aide, Honey Mahogany, a Black queer, nonbinary, transgender native-born San Franciscan.

If appointed Mahogany, who also chairs the San Francisco Democratic Party, would be the city's first transgender supervisor. She has already said she plans to run for the District 6 supervisor seat once Haney departs.

Had Campos won the legislative seat he would have been the first gay formerly undocumented immigrant to serve in the state Legislature. He and his family escaped Guatemala when he was 14 and illegally crossed the border into the U.S.

Campos would also have been the city's first Latino legislator and would have returned LGBTQ representation from San Francisco to the Legislature's lower chamber.

When the 17th Assembly seat was last open in 2014, due to gay former assemblymember Tom Ammiano being termed out of office, Campos had lost to Chiu. At the time Campos was serving as San Francisco's District 9 supervisor.

His election would also have resulted in a record high of nine members in the Legislative LGBTQ Caucus. Helping the affinity group for out legislators reach that milestone could now be former San Diego City Council President Georgette Gómez, who is vying to become the first queer member of the state Legislature.

With all votes now counted she ended up in first place in the April 5 special election for the vacant Assembly District 80 seat. She is now in a runoff race on the June 7 primary ballot against the second-place finisher, former San Diego City Council member David Alvarez.

Lorena Gonzalez Fletcher had resigned from the seat in January ahead of her leading the powerful California Labor Federation this summer. She endorsed Gómez as her successor, and Gómez is also on the June ballot in the primary race for a full two-year term in the Assembly seat. The top two finishers in that contest will advance to the November ballot.

"That's right: I'll be on the ballot twice — which is confusing, I know," Gómez wrote in a recent email to supporters. "But at its core, this is still a simple race: In the State Assembly, I'll stand up to special interests and fight for working families, always. My opponent's record proves he won't do the same."

Turnout will be key in SF Assembly runoff race