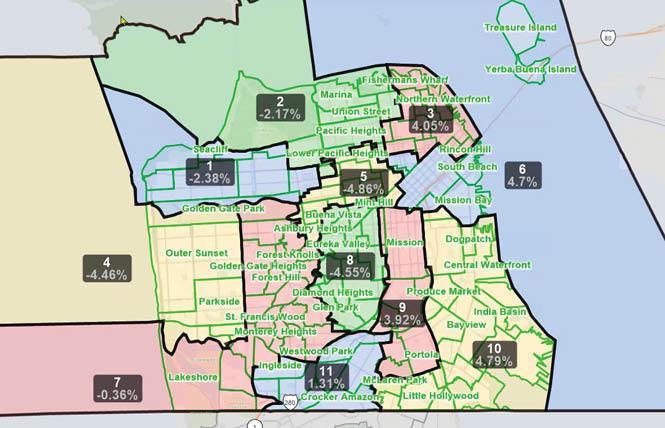 The San Francisco Redistricting Task Force will meet Thursday to discuss Map 7, which maintains the Tenderloin in District 6. Photo: Screengrab

A lawsuit has been filed against the panel redrawing the local electoral map for San Francisco's 11 supervisorial districts and the city's director of elections. It is seeking to have the San Francisco Superior Court step in and take over the process.

A legal challenge had been expected after the San Francisco Redistricting Task Force missed its deadline as mandated by the city charter to have a new map approved by April 15. After rejecting by a 5-4 vote last Wednesday a map widely panned by Black, Latino, and LGBTQ advocates, the task force is expected to reconvene at noon Thursday, April 21, to complete its line drawing work.

But Tuesday three San Francisco residents calling themselves "good governance activists" filed a lawsuit with the local court asking it to hold a hearing next week and to adopt a final supervisorial district map by May 2 that can be used for the November races for even-numbered seats.

They are alleging that "partisan political interests" intervened in what is supposed to be a process overseen by an independent commission. They also cite the state's Fair And Inclusive Redistricting for Municipalities And Political Subdivisions (FAIR MAPS) Act as requiring the court to step in and oversee the redistricting process if a petition for it to do so is filed when a local body tasked with redrawing political districts misses its deadline to do so.

"This is an attack on the process by extreme partisans to protect their entrenched interests," stated Todd David, a plaintiff in the suit and pro-housing activist. "They are worried that a fair redistricting will ultimately result in a shift away from the status quo. These extreme partisans are finally being challenged so that San Francisco can fulfill its potential of becoming the shining beacon on the hill."

David, who lives in Noe Valley, has managed past campaigns for gay state Senator Scott Wiener (D-San Francisco) and is executive director of the Housing Action Coalition. He was joined by Drew Min, an Asian American community activist, and Jon Schwark, an urbanism advocate and Mid-Market resident, in filing the lawsuit.

"A coordinated effort from politically toxic forces threatened and intimidated anyone who disagreed with them," stated Min. "These bullying, antidemocratic tactics were successful in delaying the passage of the final map, illegally missing the mandated deadline."

The task force's deliberations had become increasingly chaotic and controversial over the last month. A last-minute effort to have the city's elections commission remove its three appointees to the task force failed.

One of the trio, Raynell Cooper, ended up voting with the majority of the nine task force members to continue their line drawing work. The four others were chair the Reverend Arnold Townsend and members Jose Maria (Chema) Hernández Gil, J. Michelle Pierce, and Jeremy Lee, one of two queer men serving on the task force.

Voting in the minority were vice chair Ditka Reiner, Matthew Castillon, Lily Ho, and Chasel Lee, the other out member of the task force. They, along with Townsend, had initially supported a map that would have moved the Tenderloin and its Transgender District into a new District 5 while keeping SOMA and its Leather & LGBTQ Cultural District in a new District 6.

Another controversial change that the task force was set to adopt was moving the Portola and University Mound neighborhoods into District 10 from District 9 and the Potrero neighborhood into D9 from D10. African American residents of District 10 vocally complained about the decision, arguing it would dilute the Black vote and make it more likely an Asian candidate would be elected as its next supervisor.

The task force is now set to take up what has been dubbed Map 7, which keeps the Portola and University Mound grouped with the Mission in District 9. Potrero and the Dogpatch continue to be with the rest of District 10 under that map, which can be seen online here.

The Tenderloin and SOMA remain together in District 6 with Mission Bay and Treasure Island. District 8 also remains largely the same, though its eastern boundary with District 9 is moved west from Valencia Street to Guerrero Street.

Yet the block of Valencia between 24th and 25th streets, where gay District 8 Supervisor Rafael Mandelman lives, would stay a part of District 8, as under Map 7 the line would run down Valencia to Cesar Chavez Street where it would turn west again up to Guerrero. The 100 block of Valencia where the Chan National Queer Arts Center, home to the San Francisco Gay Men's Chorus, is located would also be carved into District 8.

Whether those district boundary lines on Map 7 will remain in place as the redistricting task force regroups this week to try to finish its map continues to be an open question. Nor is it clear if the superior court would adopt such a political division of the city if it decides to take over the line drawing.

If the redistricting task force approves a map Thursday then it would hold another one 72 hours after the proposed map is published online to cast a final vote for it. It would also hold a meeting in the interim to gather additional public comment, though the task force could become a moot body should the superior court decide to intervene.

The city's elections department has said it needs to know what the new map is going to be by May 2 so it can determine if candidates who file for the November races are eligible to seek the supervisorial seat they wish to represent. A supervisor must live within their district.

Mandelman is also waiting to find out what the new map will look like, as he is already campaigning for his reelection in the fall to the District 8 seat.

The redistricting task force will meet Thursday in Room 406 at City Hall and also screen the proceeding online. For more information about the task force, and how to view its April 21 meeting virtually, visit its website.