Transmissions: Letters of hope amid the darkness 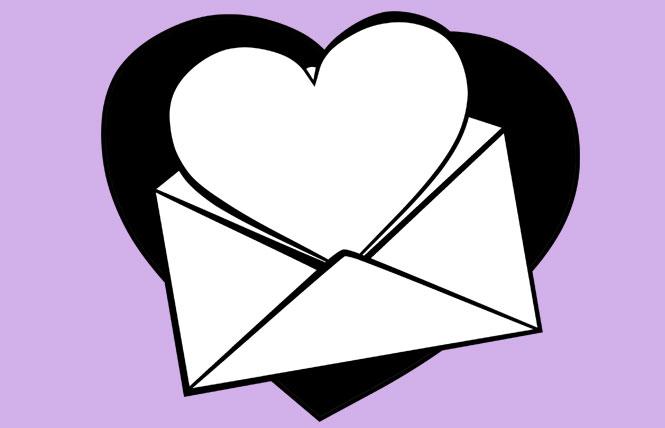 Over the last few weeks, anti-transgender and general anti-LGBTQ animus has reached a fever pitch. The hatred is easily as bad as it's been since orange juice pitchwoman Anita Bryant was fighting against our rights in Dade County, Florida back in 1977.

It is bad enough that Florida's "Don't Say Gay" has been signed into law and several states are seeking to follow suit. But many others are passing anti-transgender sports bills, bathroom bills, and even laws that make transgender care itself a felony.

Transgender people specifically, and LGBTQ people and allies in general, are being increasingly targeted. Anyone showing support for trans and LGBTQ people is being labeled a "groomer," and pedophilia is being wrongly linked to our rights.

You are even seeing the killings of transgender people being set up as a joke, as right-wing Blaze TV host Elijah Schaffer and guest Dave Landau did recently.

"Yeah, we all have to put a trans kid and drag them behind a truck," Landau meanly joked with Schaffer April 14.

"How many trans kids did you kill today?" Schaffer then asked. "Uh — six. They come with a toll tag," replied Landau.

This, of course, is occurring in a year where we know of 12 people who have been killed due to anti-transgender violence. And it's only April.

To say that these times are bleak is to sugarcoat the climate toward trans people right now. Even with some assurances and positive moves from the Biden administration, transgender people are finding ourselves with few friends willing to stand with us.

Into this environment, Ina Fried, an Axios reporter and longtime friend of mine, has exhibited a faint ray of hope. She took to Twitter to start a project with the hashtag #Letters4TransKids.

The project is just as it sounds. Fried, a trans woman, has invited people to write letters to transgender youth so as to provide a little reinforcement for our most vulnerable community members. Dozens have added their own letters to the mix, including yours truly. What follows is my own letter.

I know, things are freakin' scary right now. There's just so much going on, so fast. I feel it too. These are scary times, no doubt.

I'll tell you a secret, though: you know who is scared more? The people making these laws.

OK, that is pretty obvious, I'm sure, but it's not that they're scared of us in bathrooms, or in sports, or whatever else they're saying: that's just their excuse.

No, they're scared of what we represent. They look at us and see something special, and rare, and wonderful. We represent possibilities they can't even fathom. We express freedoms they are utterly terrified by.

You contain magic, and that magic is amazing and powerful — and all your own. They can never take it from you, just like they've never been able to take mine. They can try, but they cannot ever truly hold back souls like ours.

Be unfettered, be free, and let your magic shine like nothing that ever came before.

I believe every word of the above.

As the transgender community has grown since the 1990s, reaching what Time magazine prematurely coined the "transgender tipping point" in 2014, it was inevitable that we would be on the receiving end of a backlash.

On top of that, there is a rabid conservative faction that is looking for an anti-LGBTQ fight to rally around post-Obergefell (the 2015 U.S. Supreme Court same-sex marriage decision) and post-Donald Trump. All of this is clearly setting up an epic Supreme Court battle as well as vicious midterm elections later this year.

Yet, I do feel the issue goes deeper than merely toxic right-wing politicians crafting more ways to cynically claim power. I really do believe this is emblematic of their fears. They see a new generation that may not wholly embrace their biases, and is open to accepting gender identities and expressions that their parents and grandparents don't understand.

We represent possibilities they cannot fathom. They don't understand how wrong they may be about gender as a whole, and fear what that might mean to them. They may have spent decades shoring up their own unreasonable attitudes toward gender; any other path may seem a dire threat.

No longer able to dismiss us, no longer feeling they're part of the majority, they can only move to try to eradicate transgender people and the rest of the LGBTQ community. They need to ban books that support us, or even ones that might speak of embracing difference in even the most milquetoast forms. They need to bar us from participating in society.

They need to try to crush us, physically, spiritually, and emotionally.

In times as bleak as these, it is easy to give in to despair. Frankly, these are huge threats to us all, not the least the families of transgender people in the states most affected by these horrible new anti-transgender, anti-LGBTQ laws.

Fried's project gives us a template to fight back against anguish. She has shone us a beacon of hope though the darkness.

We'll need more, certainly. Not just letters to trans kids — though more of these would help — but we need people who are willing to risk these laws, and speak out for transgender and LGBTQ people, and protect us in the most direct ways.

We also need lawmakers who are willing to strike back at these proposals whenever they come up, and instead introduce legislation that consists of stronger protections. Yes, this includes Congress, which needs to pass LGBTQ protections far more robust than what a single administration can craft.

But first, we need hope.

Gwen Smith thanks Ina Fried for showing us the path. You'll find Smith at www.gwensmith.com

Transmissions: The other days