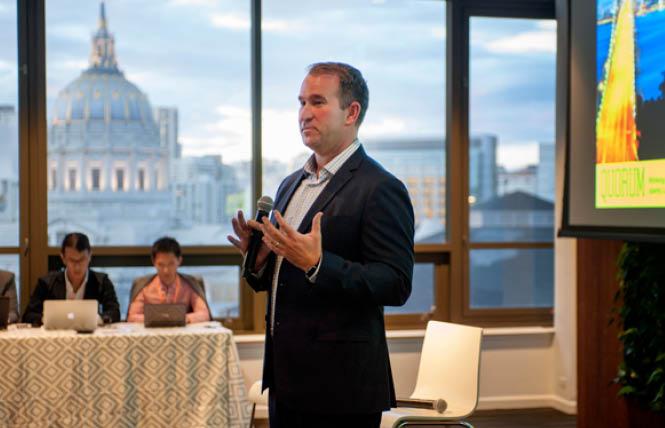 Members of LGBTQ and other minority business associations have expressed disappointment at a recent court decision that has ruled a California law aimed at increasing diversity on corporate boards is unconstitutional.

A Southern California judge made the ruling on a law that was intended to broaden access to the state's powerful business community for those rarely seen in its corporate boardrooms, including LGBTQ persons.

By identifying numerous ethnic, racial, and sexual minorities and mandating their inclusion in the boardrooms of publicly traded companies based in California, Assembly Bill 979, signed into law September 30, 2020, expanded the talent pool of who could serve on executive offices and boards, similar to Senate Bill 826, which was passed in 2018 and sought to increase women's representation in those same boards and offices.

It didn't last long. Earlier this month, on April 1 to be exact, Los Angeles County Superior Court Judge Terry Green, an appointee of then-Governor Pete Wilson (R), ruled in favor of the three plaintiffs who filed suit against the law the day it was signed by Governor Gavin Newsom, after determining it violated the California Constitution. They were represented by Judicial Watch, a conservative group better known for its lawsuits against the Clinton administration and for its active role in former President Donald Trump's efforts to overturn the 2020 election results in the courts. Joe Kocurek, press secretary for California Secretary of State Shirley N. Weber, told the Bay Area Reporter the office was still undecided on whether it would pursue an appeal.

Written primarily by Assemblymembers Chris Holden (D-Pasadena), Christina Garcia (D-Bell Gardens), and San Francisco's then-rep David Chiu, who resigned to become San Francisco city attorney last November, the law was designed to increase the presence of several defined minority groups on the boards of all public companies in California with a principal executive office in the state, and securities listed on a major American stock exchange. Chiu did not immediately return a B.A.R. request for comment.

Members of the Diverse Corporate Directors Coalition, which includes Out Leadership's OutQuorum, said they were disappointed by the judge's decision.

"The need for corporate America to embrace diversity in the boardroom has never been greater," DCDC stated in a news release.

The coalition noted the law was conceived as a response to decades of inaction on board diversity. "Recently, female and minority representation has increased marginally but representation remains abysmal, and the pace of change is slow," the coalition stated.

Calling it a "frustrating setback" but not entirely dismayed, Out Leadership founder Todd Sears said in a news release "we believe this is only one battle lost in a war being won on numerous fronts. In fact, diversity gains are being made in powerful boardrooms and C-suites across the country and around the globe, notably without regulatory mandates."

Out Leadership is an organization dedicated to "making LGBTQ+ equality a priority in global C-Suites," the executive level managers who run the country's corporate offices.

"Any time you have a ruling against something seen as progressive, it can be a challenge but it can also be an opportunity," said Sears in a phone call from New York City. The way Green struck the law down, Sears said, was based more on the legality rather than the spirit of the law.

"Companies' inclusivity efforts, whether at the board, leadership, and/or workforce level, may carry the added benefit of general goodwill among employees, consumers, and shareholders," read an article published by NLR April 16. "Companies, in turn, should engage these efforts with a similar eye towards building stronger protections around governance disputes, shareholder challenges, and other labor and employment issues."

Indeed, the law itself described the circumstances it was intended to improve noting that "only 31% of African Americans and 22% of Latinos worked in management, professional, and related occupations while 54% of Asians and 41% of whites worked in the same occupation" and "the percentages of Fortune 500 company board seats held by people identified as African American/Black, Hispanic/Latino(a), and Asian/Pacific Islander were 8.6%, 3.8%, and 3.7%, respectively," among numerous other points. The bill was amended in August 2020 to include members of the LGBTQ community.

Green's 24-page ruling even supports the idea that law was attempting to address:

"This litigation was born because the Legislature spotted an issue: corporate board seats by and large belong to members of one race, sexual orientation, and gender identity," Green wrote. "After further investigation, they concluded that this disparity was the result, conscious or unconscious, of a process that leads board members to select replacements who look and feel like them. This meant that qualified members of other groups were, intentionally or unintentionally, being excluded."

The problem, he ruled, was AB 979 violated the state constitution's Equal Protection Clause.

"If demographically homogeneous boards are a problem," Green continued, "then heterogeneous boards are the immediate and obvious solution. But that doesn't mean the Legislature can skip directly to mandating heterogeneous boards. The difficulty is that the Legislature is thinking in group terms. But the California Constitution protects the right of individuals to equal treatment. Before the Legislature may require that members of one group be given certain board seats, it must first try to create neutral conditions under which qualified individuals from any group may succeed. That attempt was not made in this case."

Assembly Bill 979 was, Green essentially surmised, a ham-handed approach at dealing with a real problem.

"Only in very particular cases should discrimination be remedied by more discrimination," he wrote. "And that should only happen after obvious alternative measures have been tried. Sometimes the direct approach should be the last resort, not the first."

"This historic California court decision declared unconstitutional one of the most blatant and significant attacks in the modern era on constitutional prohibitions against discrimination," the organization stated in an April 1 statement on its website. "In its ruling today, the court upheld the core American value of equal protection under the law. Judicial Watch's taxpayer clients are heroes for standing up for civil rights against the Left's pernicious efforts to undo anti-discrimination protections."

Sears, however, remains optimistic. Corporations are seeing the advantages to having more diversity, including LGBTQ diversity, on their boards and in their executive offices, he said. In particular, Generation Z (those born between 1997-2012), 21% of whose members identify as LGBTQ according to a recent Gallup poll, "expects and demands" that kind of diversity, Sears added.

More and more corporations are working to diversify their C-Suites and boards, he said, because all these things are "fundamentally good for business."

The U.S. Securities and Exchange Commission is already on track with these efforts, Sears said, and is encouraging businesses to do the same. And the talent is there. His organization maintains a list of 2,000 potential board members who are ready to get work, he said.