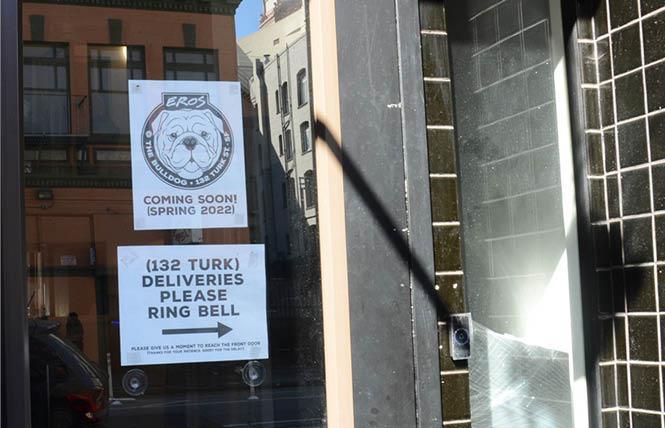 A proposed zoning change to allow gay bathhouses and other adult sex venues to open in the city's historic LGBTQ neighborhoods is close to being finalized. The new rules for such businesses should be in place by Pride Month in June.

It will allow Eros, the sex club for queer and trans men, to reopen its doors at 132 Turk Street. After closing its longtime upper Market Street location in the Castro LGBTQ district in December, Eros began remodeling and moving into its new space, where the gay Bulldog Baths had operated in the late 1970s and 1980s.

The San Francisco Board of Supervisors' Land Use and Transportation Committee voted 2-0 Monday, April 18, in support of the changes to the city code needed for Eros and other such businesses to legally operate. The full board is expected to vote in favor of the zoning change at its May 3 meeting and cast a final vote the following Tuesday.

"Bathhouses are a common feature in LGBTQ communities in many cities around the world, and they used to be quite common in San Francisco as well," noted gay District 8 Supervisor Rafael Mandelman at the committee hearing.

He ended up voting along with District 5 Supervisor Dean Preston in support of the zoning change 2-0 due to the absences of committee chair District 7 Supervisor Myrna Melgar and District 3 Supervisor Aaron Peskin. Because of several substantive amendments made to the zoning proposal, the land use committee needs to vote on it again next Monday, April 25.

Mandelman has spearheaded the legislative effort to undo a prohibition against such businesses having locked rooms that was enacted in the 1980s during the height of the AIDS epidemic. It effectively led the city's gay bathhouses to close their doors, with the only ones left in the Bay Area being in Berkeley, where Steamworks Baths continues to operate, and San Jose, which saw the Watergarden go out of business in the summer of 2020 amid its forced closure during the COVID-19 pandemic.

San Francisco officials lifted their prohibitory rules for gay bathhouses in early 2021. Yet zoning restrictions remain in place preventing adult sex businesses from operating in most of the city.

Zoning Administrator Corey Teague in December 2020 determined that adult sex venues as defined by the city's health code were considered a type of adult business under the planning code. Such establishments include adult bookstores, video stores and theaters historically patronized by men in order to engage in sex with other men on site. They are broadly banned throughout much of San Francisco, including in such LGBTQ neighborhoods as the Castro, Upper Market, Tenderloin, and South of Market.

To lift the de facto adult sex business ban, Mandelman introduced the cleanup zoning proposal in March. Last Monday, the city's Small Business Commission unanimously voted in support of it; its decision came just days after the planning commission had also done so at its April 7 meeting.

His ordinance updates the definition for adult sex venues to include retail sales and service uses. It also outright allows them to operate 24/7 in the Castro and on upper Market Street between Octavia Boulevard and Castro Street. They would also be allowed on Folsom Street between Dore Alley and Seventh Street, and throughout SOMA west of Seventh Street.

While initially proposed to only include the 100 block of Turk Street in the Tenderloin, the ordinance is being expanded so that such businesses would be allowed throughout the Transgender District's boundaries. It would also make clear that the venues could seek live entertainment permits.

Such businesses would need to seek a conditional use permit if they wanted to open in other parts of SOMA or in the Mission, Dogpatch, and Bayview. They would also need to seek permission to operate between 2 and 6 a.m. in those locations. Because it would require a vote by the planning commission, residents of those areas would be able to weigh in on allowing an adult sex business to open.

The zoning change makes clear that adult businesses, however, are not permitted in the Chinatown Community Business District. It also amends the definition of an Adult Sex Venue to specify that they "may include bathhouse facilities such as pools, tubs, or steam rooms, and are eligible for a Limited Live Performance permit."

As Mandelman told his colleagues Monday, "the purpose of this ordinance is to complete — we hope — the work we began in 2020 to overcome the lingering stigma from a painful chapter in the history of the San Francisco's queer community by once again welcoming these safe, LGBTQ-affirming spaces in our city, and paving the way for queer business owners to open up and contribute to our post-pandemic economic recovery."

Eros co-owner Ken Rowe stressed during the hearing that the gay- and trans-owned business operates similar to a "day spa" as it has set daytime and evening hours and is not open 24 hours a day. Since it opened in 1992, the business has worked "to exceed," noted Rowe, the requirements the city has placed on commercial sex venues.

"We have been able to weather the crises of AIDS and STIs, the drug crisis, and we find ourselves the only gay commercial sex venue to remain in business post the COVID imposed closures," said Rowe, referring to the fact that the sex club Blow Buddies that had been in SOMA closed down.