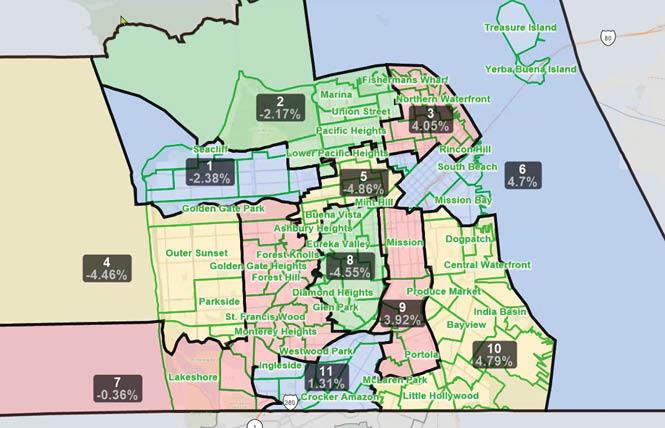 The San Francisco Redistricting Task Force will meet Thursday and discuss Map 7, which keeps the Tenderloin in District 6. Photo: Screengrab

The panel redrawing the local electoral map for the city's 11 supervisorial districts will resume its work Thursday, a week after it missed its deadline to finalize the political boundaries. It will continue its task under a cloud of legal questions.

The San Francisco Redistricting Task Force has scheduled its next meeting for noon, April 21, in Room 406 at City Hall. The proceedings will also be screened online and focus on what has been dubbed Map 7, which can be viewed here.

The task force had voted 5-4 last Wednesday to reject the map that it had been set to adopt and go back to the drawing board. Numerous community groups and residents, including LGBTQ advocates, had opposed the map for how it carved up various neighborhoods, including the Tenderloin, South of Market, and Castro LGBTQ districts.

Under the city's charter, the task force was mandated to have adopted a new map by 11:59 P.M. April 14. It remains to be seen if the map it now ends up approving will stand up to any legal challenges against it.

The task force's deliberations had become increasingly chaotic and controversial over the last month. A last-minute effort to have the city's elections commission remove its three appointees to the task force failed.

One of the trio, Raynell Cooper, ended up voting with the majority of the nine task force members to continue their line drawing work. The four others were chair the Reverend Arnold Townsend and members Jose Maria (Chema) Hernández Gil, J. Michelle Pierce, and Jeremy Lee, one of two queer men serving on the task force.

Voting in the minority were vice chair Ditka Reiner, Matthew Castillon, Lily Ho, and Chasel Lee, the other out member of the task force. They, along with Townsend, had initially supported a map that would have moved the Tenderloin and its Transgender District into a new District 5 while keeping SOMA and its Leather & LGBTQ Cultural District in a new District 6.

District 6 Supervisor Matt Haney, who lives in the Tenderloin, was among those opposing such a division of his current supervisorial boundaries. He told the Bay Area Reporter last week that he is hopeful the Tenderloin and SOMA will stay in District 6.

"I do not believe it is my place to directly influence the redistricting task force members as they deliberate. I have not done that," he said. "But I have made it clear when asked, I really do believe that SOMA and the Tenderloin belong in District 6 and belong together."

Another controversial change that the task force was set to adopt was moving the Portola and University Mound neighborhoods into District 10 from District 9 and the Potrero neighborhood into D9 from D10. African American residents of District 10 vocally complained about the decision, arguing it would dilute the Black vote and make it more likely an Asian candidate would be elected as its next supervisor.

Gay former District 9 supervisor David Campos had sought to see the Portola become a connected neighborhood in his district during the 2010 redistricting process. He told the B.A.R. last week that he sees no reason to now switch course.

"We worked with the Portola neighborhood last time because at some point it had been divided into D9 and D10. I think the consensus of the neighborhood at that time was it wanted to be in one district and at that time it wanted to be in D9," recalled Campos, who is running against Haney in Tuesday's special runoff election for the vacant 17th Assembly District seat. "Now, I personally think the Portola should continue to be in D9. Having Potrero Hill in D9, you know, it doesn't make any sense. There really is no history between it with the Mission and Bernal Heights. It dilutes the voting power of the Latino community and the African American community."

Campos also told the B.A.R. he agrees with Haney on the need to keep the LGBTQ neighborhoods of District 6 together under the new map.

"Dividing up the LGBTQ community between the Tenderloin and South of Market makes no sense," he said. "Given the history of the LGBT community and of that connection, I think it is really a big mistake for them to do that."

Under Map 7 the Portola and University Mound remain grouped with the Mission in District 9. Potrero and the Dogpatch continue to be with the rest of District 10.

The Tenderloin and SOMA are together in District 6 with Mission Bay and Treasure Island. District 8 also remains largely the same, though its eastern boundary with District 9 is moved west from Valencia Street to Guerrero Street.

Yet the block of Valencia between 24th and 25th streets, where gay District 8 Supervisor Rafael Mandelman lives, would stay a part of District 8, as under Map 7 the line would run down Valencia to Cesar Chavez Street where it would turn west again up to Guerrero. The 100 block of Valencia where the Chan National Queer Arts Center, home to the San Francisco Gay Men's Chorus, is located would also be carved into District 8.

Whether those district boundary lines on Map 7 will remain in place as the redistricting task force regroups this week to try to finish its map continues to be an open question. Should they be rejected then that decision could also prompt legal challenges.

The task force has yet to agendize any other meetings. If it approves a map Thursday then it would hold another one 72 hours after the proposed map is published online. It would also hold a meeting in the interim to gather additional public comment.

The city's elections department has said it needs to know what the new map is going to be by May 2 for the November election where voters will elect supervisors for the even-numbered districts. Also waiting to find out what the new map will look like is Mandelman, as he is already campaigning for his reelection in the fall to the District 8 seat.

For more information about the task force, and how to view its April 21 meeting virtually, visit its website.

Fate of SF LGBTQ districts up in the air under redistricting process
Sign up!