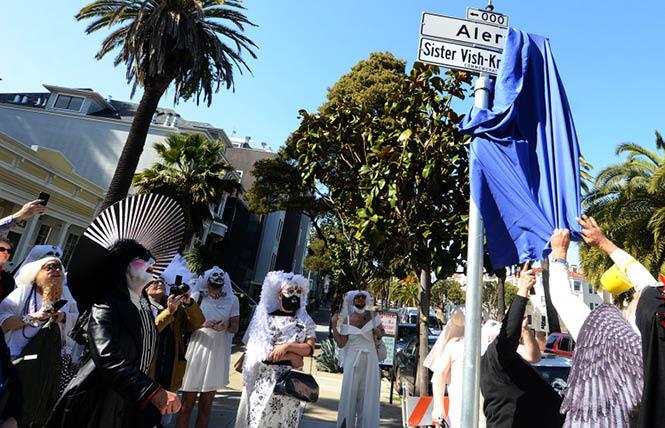 After a little difficulty of removing the cloth, the new street sign for Sister Vish-Knew Alley was revealed in a sidewalk ceremony April 16. Sister Vish-Knew, aka Kenneth Bunch, left, and over 20 Sisters were there to celebrate. Photo: Rick Gerharter

Calling it recognition for all the Sisters of Perpetual Indulgence, the co-founder of the international drag nun philanthropic group unveiled Saturday the San Francisco city street named in her honor as Sister Vish-Knew Way. It coincided with the group's annual Easter Weekend celebrations and came 43 years after she first manifested the Sisters with a few friends.

"Even the Catholic Church called it Holy Saturday," joked Sister Vish-Knew, sporting a black-and-white ensemble with a circular headpiece forming a silver halo above her.

She added that the street sign "is a stamp of approval for the Sisters." Referring to the war in Ukraine and the global assault against LGBTQ rights, she added, "The world needs us now more than they ever did."

The commemorative renaming of Alert Alley between Dolores and Landers streets marks the first time a member of the Sisters has been honored in such a way. The new signage can be found at both ends of the narrow alleyway a short walk from the Archdiocese of San Francisco's Mission Dolores Basilica and the historic Misión San Francisco de Asís.

"It feels so amazing. It just makes me very happy and proud," Sister Roma told the Bay Area Reporter. "I owe my life to Vish. I wouldn't be who I am today, none of us would be, without Vish."

Roma, now serving as the local order's Mistress of Novices to assist new aspirants, first joined the Sisters in 1987 two years after she had moved to San Francisco. Last year, Roma approached gay District 8 Supervisor Rafael Mandelman about erecting a street sign to honor Sister Vish-Knew, as the B.A.R. was first to report in January.

"I think it is a great way to come out of the pandemic. It is a little bit of celebration that is well deserved," Mandelman, who shepherded the street-naming proposal through the city approval process this winter, told the B.A.R. at the April 16 unveiling ceremony.

Cory Nichols, a gay resident of the neighborhood, told the B.A.R. he is excited to see the street sign whenever he heads to his job as a bartender at the Castro restaurant Starbelly or takes his three-month-old Boxer puppy Colby out for walks. It will be a daily reminder of his being a Sister, having joined the local order six years ago and taking the name of Sister Angelina Holi.

"I think it is fabulous. She founded the order, and it is a great way to acknowledge the work of the Sisters in the city," said Nichols, who had come to the ceremony out of his nun drag with Colby by his side. "Sisters wanting attention and having a street named after us, it's a fabulous thing."

Right next to the alley is the apartment at 272 Dolores Street where Sister Vish-Knew, known as Kenneth Bunch out of her nun drag, and several friends had gotten together on the eve of Easter in 1979 and ended up donning nun habits. Their venturing out into the city adorned in the religious garb that Saturday was the first manifestation of the Sisters, which today has orders in 60 different cities and 14 countries.

Bunch, who as a 25-year-old gay man first came to San Francisco on vacation in January 1977, decided to relocate to the City-by-the-Bay permanently from the gay-owned farm he had been living on outside Iowa City. He had packed the nun habits with him when he moved.

As it also happens, Bunch has lived for nearly 36 years nearby Alert Alley. Ordained the group's Grand Mother Vicious Power Hungry Bitch, Bunch shortened his name to Sister Vish-Knew a decade ago so it wasn't so long or sounded as harsh.

The second half came about from repeatedly being asked if he knew the sisters would have such longevity when he helped found them so many decades ago. It is also an homage to the Hindu god Vishnu.

Early on Bunch was called Sister Ady in reference to Ardhanarishvara, which is a form of the Hindu deity Shiva combined with his consort Parvati. They are usually depicted as half-male and half-female.

Local Catholic Church leaders throughout the decades have clashed with the sisters, calling them heretics and famously protesting their being given a permit to close down Castro Street on Easter Sunday in 1999 to celebrate their 20th anniversary. They will hold the annual party tomorrow, April 17, in Mission Dolores Park for the first time since the start of the COVID-19 pandemic in 2020.

"We stand as the epitome of freedom, at a time when religious oppression and authoritarianism are on the rise worldwide," said Sister Vish-Knew during the Saturday street sign unveiling attended by two dozen Sisters and a handful of local residents. "We defend and exercise those boundaries of freedom. We are needed today, more than ever."

Taking part in the ceremony was Jeffrey Tumlin, a gay man who is the city's director of transportation. He praised the Sisters for teaching him how to be a San Franciscan when he first moved to the city more than two decades ago. They also showed him how to "take the oppression, bullying, and hatred" directed at gay people, Tumlin said, "and confront it directly with disruptive joy, love and gratitude."

Not too far away from Alert Alley is José Sarria Court along the block of 16th Street where the Eureka Valley/Harvey Milk Memorial Branch Library is located. Sarria performed in drag at the North Beach gay bar the Black Cat in the 1950s and, with his 1961 unsuccessful bid for supervisor, was the first out LGBTQ person to seek elected office in the U.S.

Other LGBTQ luminaries with San Francisco streets named for them include Frida Kahlo, Dr. Tom Waddell, Alice B. Toklas and Jack Kerouac. The 100 block of Taylor Street is also named Gene Compton's Cafeteria Way for the business where a transgender-led uprising against police brutality occurred in 1966.