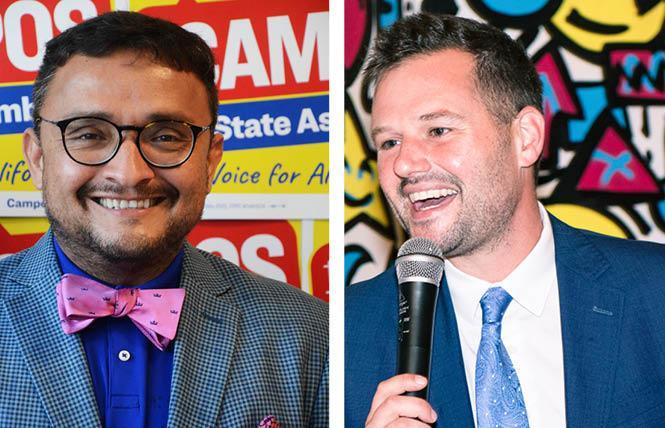 A winner will be declared in Tuesday's special runoff election for San Francisco's vacant 17th Assembly District seat. But it may not mean the end of the campaign for the two candidates seeking to represent the city's eastern neighborhoods in the state Legislature.

Either District 6 Supervisor Matt Haney or David Campos, a gay man who is a vice chair of the California Democratic Party, will be the city's next Assemblymember and serve out the remainder of the term through December. They were the top two finishers advancing out of the February 15 election to fill the seat vacated by David Chiu, who in November became San Francisco's first Asian American city attorney.

The pair of progressive politicians has also qualified for the June 7 primary ballot in the race this year for a full two-year Assembly term on the November ballot. Thus, whoever falls short Tuesday could decide to continue to compete for the legislative seat against the winner.

In the case of Haney, should he not win Tuesday then he would need to decide if he wants to continue pursuing the Assembly seat or run for reelection to his supervisor seat in the fall. Yet whether the Tenderloin resident will remain in District 6 is an open question with the city's redistricting task force failing to meet its April 15 deadline to produce a new map for the 11 supervisorial districts.

Under a map the body abandoned last week, Haney would have found himself living in the new District 5. Where he will now end up should become clear by May 2, when the elections department has said it needs to know what the boundaries will be for the even-numbered supervisor districts that will be on the fall ballot.

Such future candidacy decisions won't come into focus, however, until a winner is declared in the runoff race. On that point, Haney and Campos both told the Bay Area Reporter that they expect to be sworn into the Assembly seat.

"I am going to win on Tuesday and immediately get to work in Sacramento," said Haney, who turned 40 years old Sunday. He will be watching election returns Tuesday night at the aptly named bar and event venue Victory Hall, located at 360 Ritch Street.

Campos, 51, was equally confident, telling the B.A.R. last week, "We are going to win on Tuesday so that is our plan." He will gather with his supporters after the polls close at queer nightclub El Rio, 3158 Mission Street.

They were less certain on if they would face a contested election going forward. An answer will likely come this week should the endorsers of the candidate who loses Tuesday begin throwing their support behind the winner, as it would make it highly unlikely whoever is defeated in the runoff would continue on with their campaign for the Assembly seat.

For now, neither Campos nor Haney was willing to contemplate such an outcome for their candidacy.

"I don't know what to tell you about that," said Campos regarding there being a contested general election race. "Our expectation is we are going to win on Tuesday and we will be running in June as the incumbent assemblymember."

Haney told the B.A.R. the only election he is focused on is the runoff race.

"I am focused on winning on Tuesday. We really have not made any decisions beyond that," he said. "What happens in June or November will be decided, in large part, by what happens on April 19."

The voters ultimately could be the ones who decide what happens going forward, as they could opt to cast their June ballot for the candidate of their choice even if that person says they're not vying for the seat anymore. The other candidate to qualify for the primary is Republican Bill Shireman, an environmental solutions entrepreneur who has little chance of being elected in the heavily Democratic district.

Potentially historic outcome
The outcome of Tuesday's race could be historic either way. Should Campos win the legislative seat he would become the first gay formerly undocumented immigrant to serve in the state Legislature. He and his family escaped Guatemala when he was 14 and illegally crossed the border into the U.S.

His election would also mean a record high of nine members in the Legislative LGBTQ Caucus. Campos would also be the city's first Latino legislator and return LGBTQ representation from San Francisco to the Legislature's lower chamber.

When the 17th Assembly seat was last open in 2014, due to gay former Assemblymember Tom Ammiano being termed out of office, Campos had lost to Chiu. At the time Campos was serving as San Francisco's District 9 supervisor.

Endorsements for Campos in this year's race have come from the B.A.R., the Bay Guardian, the Harvey Milk LGBTQ Democratic Club, Ammiano, and his gay predecessor in the Assembly seat Mark Leno. City College of San Francisco trustee Thea Selby, who fell short in the February election, threw her support behind Campos.

"We feel optimistic. Our polling has showed us with the momentum and pulling ahead," said Campos, who is counting on his get-out-the-vote efforts to put him across the finish line Tuesday. "It is why I think they are spending so much money because we have momentum."

He was referring to the barrage of television ads and mailers labor unions and other outside interests, such as the California Association of Realtors, have paid for in support of Haney and to attack Campos. Having raised more than $900,000 in the past four months, Campos has focused his spending on social media spots.

"In a low turnout election the key to victory is having the grassroots volunteers to get your vote out, and I don't think he has that," said Campos, on leave as chief of staff to San Francisco District Attorney Chesa Boudin.

Haney countered that he has "built a huge coalition" that has continued to grow in the past two months and will carry him to victory. The San Francisco Examiner endorsed him ahead of the February election, while the third-place finisher Bilal Mahmood, a former Obama administration staffer, came out for Haney in early March. Following suit were the Alice B. Toklas LGBTQ Democratic Club and the San Francisco Chronicle.

"Nearly all the organizations that had endorsed Bilal or stayed out have came on board and supported me. I am really proud of the campaign we have run," said Haney. "We have talked to tens of thousands of people and knocked on nearly every door that is reachable in San Francisco in AD17 multiple times. Because of how hard we have worked and how broad our support is, I feel confident."

A victory by Haney could pave the way for the breaking of a pink political-glass-ceiling at City Hall, as he would resign from his supervisor seat. Mayor London Breed would get to appoint his replacement on the board and could name the city's first transgender supervisor.

A resident of western South of Market Mahogany would likely be able to seek a full four-year term as supervisor in November. No matter what the boundary for the new District 6 ends up being, that part of SOMA is expected to remain in the supervisorial district.

Results of Tuesday's election will be posted online here.