Out in the Bay: Honey Mahogany on politics, 'Drag Race,' & The Stud 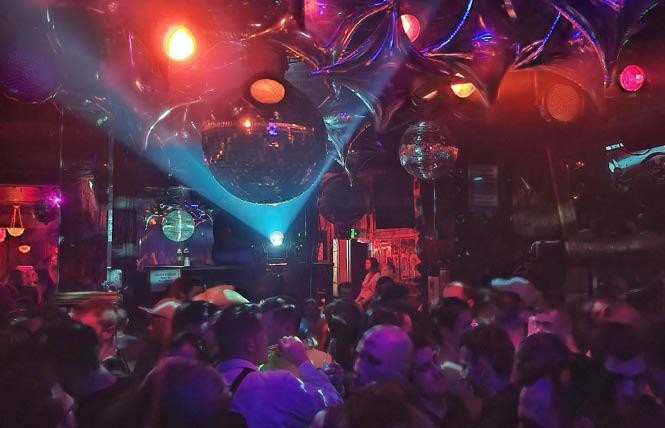 People filled the dance floor at the Last Dance at The Stud in March 2020. Co-owner Honey Mahogany said, "We will definitely be back." Photo: Christopher J. Beale

Mahogany worked as a social worker before appearing on the fifth season of "RuPaul's Drag Race" in 2016. She said the platform the reality show provided allowed her to further serve the community.

"I am really proud of the work that I have been able to do, and fulfilled by that work," she told Out in the Bay Queer Radio and Podcast this week. After "Drag Race," Mahogany released some music — we hear two of her songs on this week's Out in the Bay — and toured with her drag act. Then she returned home and rolled up her sleeves. In 2018, she became the first trans person to serve on the San Francisco DCCC, and in 2021 became its chair.

Two political battles brewing in San Francisco have Mahogany's attention. The first is the tight April 19 state Assembly runoff election between state Democratic Party Vice Chair and former San Francisco District 9 supervisor David Campos and fellow Democrat and current District 6 Supervisor Matt Haney. Campos is gay, Haney is an ally and they are both considered progressive. (Mahogany works as Haney's legislative aide and there has been speculation that she could be appointed to his supervisor seat if he wins.)

The other battle is over redistricting. Historically, District 8, which includes the Castro, has had a high LGBTQIA population and Mahogany wants to ensure that voice is preserved. But in District 6, she told Out in the Bay, "between the Tenderloin and [South of Market] we have another queer voice which is more poor, more Black, more Brown, more immigrant, and that voice isn't necessarily being heard."

Mahogany, who lives in District 6, said she has witnessed a housing boom along Mid-Market and Civic Center. She agrees the district's boundary must be smaller, but said "it can be shrunk in a way that is equitable and preserves these communities." Mahogany said that these dense districts — and their supervisors — have done their part to try to solve the housing crisis and that due to the resulting population growth, "they are now being punished, and we're seeing these communities destroyed."

Mahogany is also part-owner of the now-closed LGBTQIA nightclub co-op The Stud. Asked by Out in the Bay's Christopher J. Beale about the future of the iconic San Francisco nightspot, Mahogany said, "We will definitely be back."

Mahogany admits to not having seen a single episode of this season of "RuPaul's Drag Race." "I've been a little busy," she said sarcastically. Even so, she expects hometown queen Lady Camden to win. "She is an incredibly dynamic performer, stunning, and adorable!" The "Drag Race" season finale airs April 22 on VH1.

Mahogany said she's excited about San Francisco's future and the chance to "reinvest in so many things that made San Francisco so special for so long — revitalizing our cultural districts, invigorating the nightlife, and uplifting the voices of people of color and trans people."

"We are a city that has always had a mind to equity," she said. "Sometimes we fail at reaching it, but here we are with another opportunity to get it right."

Christopher J. Beale is a queer independent radio host, producer, and journalist based in San Francisco. He produces and hosts the "Stereotypes" podcast, contributes to the Bay Area Reporter, and has been filling in for Eric Jansen, founding host and producer of Out in the Bay — Queer Radio and Podcast. Learn more and listen at https://www.outinthebay.org/