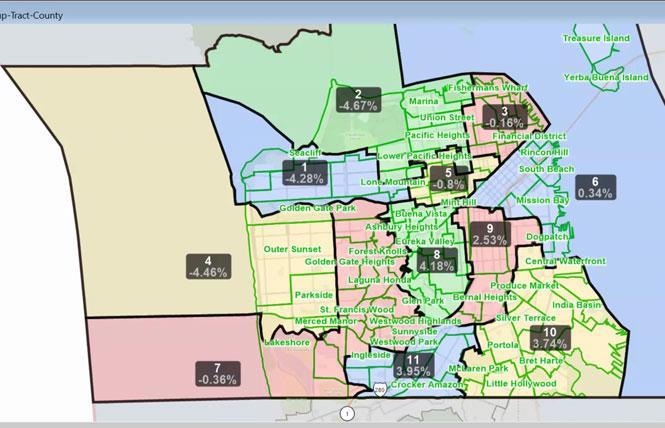 The San Francisco Redistricting Task Force has decided to continue its work of redrawing the local electoral map for the city's 11 supervisorial districts. The decision means it will not meet an April 15 deadline to finalize the political boundaries, and it is likely to be challenged in court.

The task force voted 5-4 at 9:50 p.m. April 13 to reject the map that had been advanced over the weekend and go back to the drawing board. It extends the process that had become increasingly chaotic and controversial over the last several weeks.

The task force is looking at holding its next meeting on April 21, where it would take up what is known as the "blow up" map that had the Tenderloin and South of Market neighborhoods in a new District 6 as LGBTQ advocates have demanded. If it settles on a new map during that meeting, then it would need to be posted for 72 hours.

During that time it would hold a meeting to hear public comment on the map. After 72 hours it would have another meeting where it would vote to finalize the proposed map. At that point, the map would be set.

Its decision to continue drawing supervisorial district boundaries raises legal questions, as the task force is obligated by the city's charter to deliver the new map to the Board of Supervisors by April 15. The city attorney's office has warned that if it does not do so by 11:59 p.m. April 14 it could result in a state court taking control of the process and drawing the map itself.

But task force member Raynell Cooper argued, "at this point, given the map is at risk of litigation, we should push forward with the process to get a better map."

Joining Cooper in the majority decision to keep working on the map were fellow task force members Jose Maria (Chema) Hernández Gil, J. Michelle Pierce, and Jeremy Lee, one of two queer members on it. Task force chair the Reverend Arnold Townsend was the fifth vote, a reversal of his voting over the weekend to advance the proposed final map.

"I am not ready to end this just yet," he said. "Some things need to be worked on, need to be tweaked. I am really sorry, but we just do."

Townsend has been accused of being pressured by Mayor London Breed, who appointed him as one of her three picks for the task force, to take his previous stance on the map. He had joined with vice chair Ditka Reiner, Matthew Castillon, Lily Ho, and Chasel Lee, the other out member of the task force, to approve the proposed map close to 2 a.m. April 10.

The five had done so after Reiner moved to rescind her initial no vote against the map then threw her support behind it. Her doing so had led the four other task force members to walk out of the meeting early Sunday morning.

Reiner had argued Wednesday that there was no reason for the task force to abandon the map they had provisionally approved over the weekend.

"I think we did our best and I think we did it right. We followed the rules," contended Reiner, who has faced questions in recent days about her conduct on the task force. "I am exhausted. I am ready to finish the job on time based on what we agreed on."

She also defended herself Wednesday, saying she had been sleep deprived and mistook the one motion that was being voted on over the weekend, prompting her calling for the vote to be retaken.

"I was very, very tired," she said. "I wasn't pressured into a vote. I really resent the implication I was forced into anything."

Jeremy Lee, who apologized on Monday for personal attacks he had made against the five task force members who had supported the map, said his involvement on the body had broken him.

"I was let down by the process," he said, adding that, "I let down my city on multiple fronts."

Among those critical of the initially proposed map have been LGBTQ advocates. They opposed the decision to cleave the Tenderloin apart from the South of Market neighborhood in separate districts, as the Bay Area Reporter first reported online April 10.

Dividing the two historic LGBTQ neighborhoods, with the Tenderloin moved to a new District 5 and SOMA in a new District 6, raised complaints that it would dilute the voting power of transgender residents of the Tenderloin and LGBTQ SOMA residents. It called into question how successful LGBTQ supervisor candidates in either district would do at the ballot box over the next 10 years.

The proposed map did preserve the residence of the lone LGBTQ member of the Board of Supervisors, District 8 Supervisor Rafael Mandelman, in his current district where he is seeking a second and final four-year term this fall. The Castro LGBTQ district would also remain at the heart of District 8.

But much of the Mission Dolores neighborhood was slated to be in District 9 as the dividing line between the two districts was to move west from Valencia Street to Guerrero Street. The block of Valencia between 24th and 25th streets, where Mandelman lives, was to remain a part of District 8, as was the 100 block where the Chan National Queer Arts Center, home to the San Francisco Gay Men's Chorus, is located.

Its northern boundary was to include Ashbury Heights and Cole Valley. Duboce Triangle, Noe Valley, Diamond Heights, and Glen Park would remain in District 8.

Another controversial change was moving the Portola and University Mound neighborhoods into District 10 from District 9 and the Potrero neighborhood into D9 from D10. African American residents of District 10 vocally complained about the decision, arguing it would dilute the Black vote and make it more likely an Asian candidate would be elected as its next supervisor.

Wednesday Pierce reiterated her complaints that "this process has been overtly racist to me" in arguing why the proposed map deserved to be jettisoned.

Ho criticized the anti-Asian comments and behaviors that she has experienced in the last several weeks as well as those directed toward the Asian members of the public who came to provide comment. She characterized the hearing room as "a hostile workplace" in which she didn't feel safe.

"In regards to the last couple of weeks, the anti-Asian racism has been astounding," said Ho.

She also criticized the four task members who walked out Sunday instead of remaining to work on the map. Their doing so left the five others "holding the bag," contended Ho.

"You guys gave up on us Sunday morning. I wish you had stucked it out and worked with us to make it better," said Ho. "But you gave up."

It remains to be seen how the task force will now divvy up the city or if the map it does vote on will stand up to legal challenges. The city's elections department has said it needs to know what the new map is going to be by May 2 for the November election where voters will elect supervisors for the even-numbered districts.

UPDATED 4/13/22 with additional information on the task force's next steps.

Fate of SF LGBTQ districts up in the air under redistricting process
Sign up!