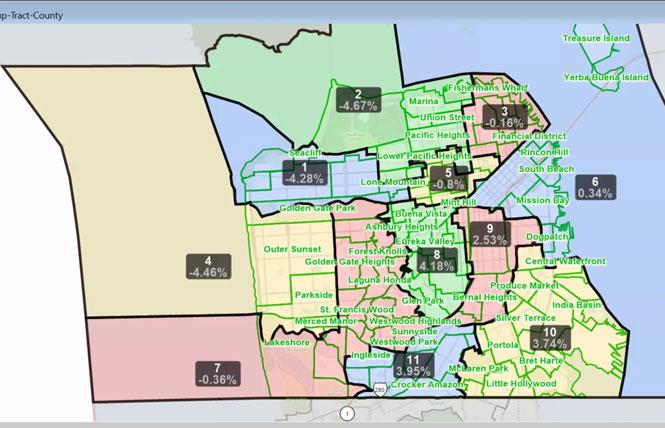 Even before it is finalized, the new electoral map for San Francisco's 11 supervisorial districts is drawing threats of legal challenges. The controversy could impact the November elections for the even-numbered seats on the Board of Supervisors.

To the dismay of LGBTQ advocates, the proposed boundaries will cleave the Tenderloin apart from the South of Market neighborhood in separate districts, as the Bay Area Reporter first reported online April 10. But it does preserve the residence of the lone LGBTQ member of the Board of Supervisors, District 8 Supervisor Rafael Mandelman, in his current district where he is seeking a second and final four-year term this fall.

The San Francisco Redistricting Task Force is obligated by the city's charter to deliver the new boundaries to the supervisors by April 15. Whether it will do so prior to its deadline of 11:59 p.m. April 14 remains an open question.

During their meeting that began Monday, April 11, and ran early into the morning April 12, several members of the nine-person panel had inquired of the city attorney's representative what would happen if they missed their deadline. Deputy City Attorney Andrew Shen, however, dodged their questions.

"I am simply prepared to advise the deadline is by end of day April 14," he replied.

The task force is to meet again at 3 p.m. Wednesday, April 13, to take a final vote on the map. They are barred, though, from making drastic changes to the boundaries approved over the weekend. All they can do is make slight tweaks to clean up inadvertent mistakes where the lines were drawn between supervisor districts.

Yet task force chair the Reverend Arnold Townsend, who had voted in the five-person majority supporting the proposed map, indicated in the early hours of Tuesday, April 12, that he was not satisfied with how the districts ended up and wanted more time to work on the map.

"If I feel the job is done then I am ready to go, but I don't feel that now. I think more work needs to be done," said Townsend, who suggested the task force members sleep on it and be prepared to discuss the deadline when they regroup Wednesday.

Task force member Raynell Cooper, who voted against the proposed map, pointedly asked, "What does the April 15 deadline mean to us?"

Another member who had voted in the minority, Jose Maria (Chema) Hernández Gil, called the new boundaries "essentially a map of class warfare" and questioned if it would hold up under legal scrutiny.

"We are going to be stuck in legal limbo on this for weeks or months to come," Gil predicted.

Attorney Alex Lemberg, who is president of the Castro/Eureka Valley Neighborhood Association, is among those who have threatened to take legal action over the new maps if City Attorney David Chiu doesn't.

"We deserve a full investigation into what is going on behind the scenes at our Redistricting Task Force. @DavidChiu, I hope you see this and promptly act on it. It's either you or me, and it'll cost the city a lot more if I do it," Lemberg tweeted April 11.

Alice B. Toklas LGBTQ Democratic Club Co-Chairs Iowayna Peña and Gary McCoy also indicated they were prepared to take additional steps to press for a more equitable map should the task force not alter the one advanced Sunday.

"We will follow the lead of our Latinx, Black, AAPI, and other LGBTQ community members as the process continues, and will be working closely with them to identify all possible options to produce a map that best reflects San Francisco's diverse landscape and many months of community input," they wrote in a letter released Monday. 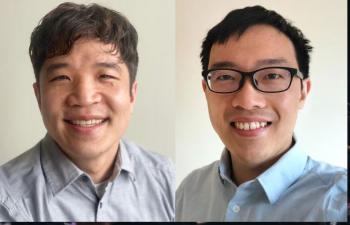 Jeremy Lee apologizes for sexualized attack
The five task force members who voted to advance the proposed map did so around 2 a.m. Sunday, 16 hours into their meeting. The other four members had walked out in disgust.

Upset at not only how the two historic LGBTQ neighborhoods were divided, the quartet was also outraged with the decision to move the Portola and University Mound into District 10 from District 9 and to put Potrero in D9 instead of D10. They complained doing so diluted the voting power of the city's African American community and hurt other marginalized groups.

They were particularly irate at seeing vice chair Ditka Reiner flip-flop on her support for making those changes. After initially rejecting such a move, Reiner returned from a recess of the meeting to say she had been confused on what map she was voting for and asked to rescind the vote.

Once that passed on a 5-4 vote, Reiner cast the fifth vote needed to alter the boundaries of Districts 9 and 10. Those also voting in the majority were Townsend, Matthew Castillon, Lily Ho, and Chasel Lee, one of two out men on the task force.

The outcome led to bedlam and a walkout by the four other task force members Gill, Cooper, J. Michelle Pierce, and Jeremy Lee, the other queer member. The meeting again went into recess in order for the remaining task force members to regain control of the proceedings.

When they resumed the meeting, the five voted a second time to advance the map then took general public comment. Cooper, Pierce, and Jeremy Lee ended up calling into the meeting to lambast what had just occurred.

Lee made particularly personal attacks against the remaining five members, saying in effect they had gotten down on their knees to fellate Mayor London Breed, her chief of staff Sean Elsbernd, and several of her other advisers.

"You all disgust me. You are spineless. You are sellouts," railed Lee, who was only publicly identified when the city clerk moderating the phone calls named him. "You will shake your ass and dance for a price."

At the start of the task force's meeting Monday, which he joined remotely, Lee apologized for his remarks to the public, his fellow task force members, Breed, and the other city officials he had named. He acknowledged they were "offensive and unbecoming for a public figure."

They were uttered "at a moment of weakness I deeply regret," said Lee, who added, "I want to apologize to my community as well. I have let you all down."

He pledged to "endeavor to repair the damage that I have done and strive to be a person of better integrity."

But Ho responded to Lee that she could not accept his apology, telling him his comments "were homophobic, sexually driven, and degrading." Not only were they "unbecoming" for someone serving in such a public position, Ho added they were "verbal abuse" that came "from a place of elite, male misogyny."

It was particularly hurtful, she said, that it came from someone she had worked with for the past seven months over hundreds of hours in a collegial manner.

"I don't take degrading dick-sucking insults from men, and you are not forgiven," said Ho.

Townsend, however, told Lee he accepted his apology and would continue to work with him.

"It was a difficult time and a difficult moment," he said. "There are times when many of us have done things and taken actions we later regretted."