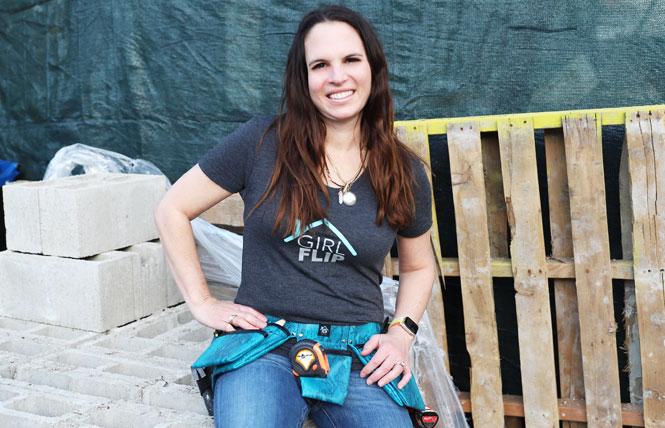 Erica Anenberg likes to be hands on in her work, especially when it comes to home renovations. For decades she has bought properties around Southern California and fixed them up herself.

It was how she spent most of the past two years during the COVID-19 pandemic.

"I never thought of it as a business until COVID hit. My wholesale retail business basically flatlined," she recalled. "I spent the majority of COVID at Home Depot and doing what I love to do."

When Anenberg, 52, decided to get into the home renovation space, she quickly noticed the lack of other women in the field. Most subcontractors she hired were men.

"It is still unusual to see a woman doing this," she said.

Last year, she launched her construction and remodeling company Girl Flip with a purposefully double entendre meaning. It refers more than just to a company flipping properties, Anenberg explained.

"It is a great catchy phrase. There is the gay connotation of flipping a girl from straight to gay," she said. "We also want to re-approach the way people are thinking about construction and see a place for women."

There are now more than 4,000 members of the National Association of Women in Construction, started in 1953 by 16 women. But barriers remain, with women making up just 11% of people working in the construction industry and earning four cents less of every $1 their male counterparts make.

According to the U.S. Bureau of Labor Statistics, there were more than 5.8 million people employed in construction and extraction occupations as of May 2021. California accounted for the most, with 663,570 people employed in the sector.

With an estimated 400,000 new construction jobs to be created in the next decade, Anenberg's aim is to see even more women hired for the positions. Through Girl Flip she is trying to foster a community among other women in the field who can support each other and mentor those interested in pursuing a similar career.

"We haven't been teaching women this is an opportunity that is available for them. That is the first step," said Anenberg. "The second step is telling women you can do this too and here's how."

She is partnering with WINTER, short for Women in Non Traditional Roles, which has a journeyman program for women interested in construction. And she is lining up more work for Girl Flip so she can hire other women as subcontractors, interior designers, and other positions.

"I have a Rolodex of 20 women with different levels and skills," said Anenberg. 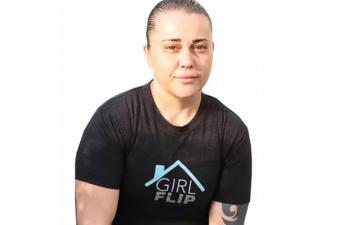 One such colleague is Anni Aceian, 38, a gay woman based in the Palm Springs area who has been a licensed contractor for 15 years. She took an interest in construction at 18 when she bought her first condo.

"I did all the work and saw how much I loved it," recalled Aceian, who started out as a building appraiser.

When she and her now ex-wife sought to become mothers, they sold off their property staging company to a woman who remained in touch with Aceian. She happened to also be friends with Anenberg and recommended she reach out to Aceian last year to hire her to oversee a project.

"I am both hands-on and a manager as well," Aceian explained of her role on the job site. "I like to be hands-on all the time."

Her main pitch for why other women should consider the construction industry as a career, said Aceian, is it pays well and is very enjoyable work. Plus, in housing starved California, the opportunities are plentiful.

"It is always a fun working environment, but it does get stressful," she said. "But there is so much advancement, and so much Erica and I can do to help train people. We want to empower everyone we can to get into this field."

Anenberg grew up in Encino and, at 13, came out as a lesbian. But even though her mom was best friends with gay men, she couldn't accept her daughter being gay.

"To this day, I still cry about it," recalled Anenberg. "It was a defining moment for me that changed my life, her unacceptance of me."

She dated both boys and girls, eventually marrying a man and starting a family with him. Their son, Ethan, is now 9 years old.

A chance encounter in 2018 at the Venice, California gay bar Roosterfish resulted in Anenberg meeting her "soul mate," a woman living in Colorado at the time.

"We had a chance meeting and there were lightning bolts," she said of her first reaction to her now wife, Beth Benson, a vice president at mobile mechanics company RepairSmith.

The women have a 13-month-old girl, Emma Jane, they are raising in Woodland Hills, which borders the Santa Monica Mountains in the San Fernando Valley. Their home had been an income property Anenberg was renting out but decided to completely makeover for Benson.

"I decided I am going to do everything and make this the most incredible dream house for my girlfriend," said Anenberg.

It led her to become a licensed contractor and an evangelist for why other women should follow suit. Through Girl Flip, Anenberg hopes to recruit more women to the profession.

"What we are trying to do is very difficult. It is probably what gay people were trying to do 20 years ago to make it more — I hate to use the word normal, but I don't know another word for it, maybe mainstream — more mainstream and more common," she said.

One way Anenberg is getting attention for Girl Flip's mission is by selling "Utility Babe" toolbelts ($68-$88) in various designs and sizes suitable for women and men. The products help promote her message.

"It is a way for us to try to get exposure," said Anenberg. "I was in fashion for a really long time and I know getting a celebrity to wear your product, that can give you the kind of exposure you wouldn't get elsewhere."

To learn more about Girl Flip, visit its website and online shop.