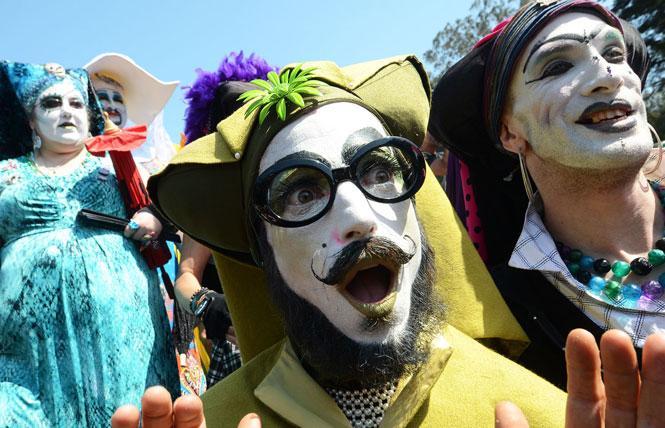 Sisters of Perpetual Indulgence from throughout the United States joined the San Francisco House in their 35th annual Easter celebration in 2014, which was held in Golden Gate Park due to construction at Mission Dolores Park. Photo: Rick Gerharter

It's been two years since the Sisters of Perpetual Indulgence have indulged the public's thirst for hunky Jesuses and foxy Marys in person but, finally, they're back and ready to party.

San Franciscans can expect a full weekend of LGBTQ-centered Easter celebrations this year: the Sisters' annual Easter party in Mission Dolores Park on April 17, and a new celebration in the Castro, the Castro Easter Eggstravaganza Block Party, hosted by the Castro Merchants Association on April 16.

The Sisters, the internationally beloved drag nun charitable group that got their start in San Francisco, are also expected to gather on Saturday for the official unveiling of Sister Vish-New Way, at the corner of Dolores Street and Alert Alley. The street name is derived from one of the names that founding Sister Kenneth Bunch has gone by over the years.

The Sisters' signature Easter event, organized under the theme "Back to Our Old Habits," begins at 10:30 a.m. with festivities geared toward children and then, at noon, the more adult-centered activities — including those infamous Hunky Jesus and Foxy Mary contests — begin.

Organizing this year's event was a little more involved than in previous years, said Sister Tilda NexTime, abbess and president of the order's San Francisco house. Unlike earlier events, in which the order had a full year to plan the party, this year's party came together in three months, she said. The Sisters debated whether it was even feasible to try. New variants of COVID were popping up that might make it a challenge.

In what might be considered a miracle of its own, the San Francisco Recreation and Parks Department reached out to them.

"They said, 'We would love for you to do the event this year and we're confident you can do it following all the protocols,'" said Tilda.

A spokesperson for the city agency confirmed it reached out to the Sisters.

"Our permits department started coordinating with the Sisters on this event back in December," said Tamara Barak Aparton, spokesperson for Rec and Park, "and had a big planning meeting in mid-March with rangers and stage and sound vendors. Planning events in Dolores Park is somewhat complicated compared to other parks, but it's a pleasure to plan and problem solve with the Sisters. We're thrilled about their return."

Fortunately, the small army of vendors and contractors who had helped organize pre-pandemic events were ready to jump back in. None of them had disappeared because of COVID, the drag nun said.

Visitors can expect an event much like previous years but with the added layer of COVID safety.

"It is a different world right now," said Tilda. "For the future parties, it will be different."

The Sisters will be making sure everyone is safe and following protocols, she said. Those who check out the Sisters' promotional material will notice that they ask everyone who attends to be fully vaccinated.

"We don't want to be a superspreader event," Tilda said.

Of course, one can't go into the Sisters' Easter party cold. To help steel oneself, one should attend the Castro Easter Eggstravaganza Block Party, hosted by Castro Merchants Association, the day before and one should definitely plan on entering the Easter bonnet contest.

Running from 11 a.m. to 5 p.m. Saturday, the party will be located on the block of Noe Street between Beaver and Market streets.

Visitors can expect music and entertainment throughout the day, but kids will have their own activities from 11 a.m. to 2 p.m., including free photos with the Easter Bunny, a petting zoo, and drag queen storytime with Princess Panocha reading "Peter Cottontail" and one other story. From 2 to 5 p.m., adults will hold sway with drag performances and the Easter bonnet contest with a grand prize of $500 (To sign up for the contest, click here.

Judges for the contest include Stephen Torres with the Castro LGBTQ Cultural District and Miguel Lopez of Sui Generis, "but we are securing more folks, all with an art or fashion background," said Dave Karraker, the new co-president of the merchants group.

And, as organizers note for those preparing to enter the contest, "The bigger the hat, the better!"

Street sign dedication
The unveiling of a street sign for newly designated Sister Vish-New Way is set for 4 p.m., April 16, at the corner of Dolores Street and Alert Alley. In addition to honoring Sisters co-founder Bunch, who has used different Sister names over the years, the site is near 272 Dolores Street, the birthplace of the Sisters.

As the Bay Area Reporter previously reported Bunch and several friends had gotten together at the Dolores Street residence the day prior to Easter in 1979 and ended up donning nuns' habits he had brought with him from Iowa before heading out into the city. It was the first public unveiling of the Sisters, which today has orders in 60 different cities and 14 countries.

Bunch's friend and fellow drag nun Sister Roma, who was elected the local order's Mistress of Novices to assist new aspirants, first broached the idea of naming a street in honor of Bunch last June. As far as Roma and Bunch are aware, no member of the Sisters has a street named after them anywhere on the globe.

The San Francisco Board of Supervisors unanimously approved the street name change in February. Sister Vish-Knew Way is a ceremonial street sign, meaning residents of the alley between Dolores and Landers streets will not have to officially update their addresses.

Spring Eggstravaganza
The San Francisco Recreation and Parks Department will have its spring Eggstravaganza April 16 from 11 a.m. to 4 p.m. at Crocker Amazon Park, 799 Moscow Street. The free family event will feature egg hunts for kids, live entertainment, games, activities, City and County of San Francisco cars and trucks for the little ones to explore, and more, according to an email announcement. Food trucks will offer items for sale. There will be free bike valet parking courtesy of the San Francisco Bike Coalition.