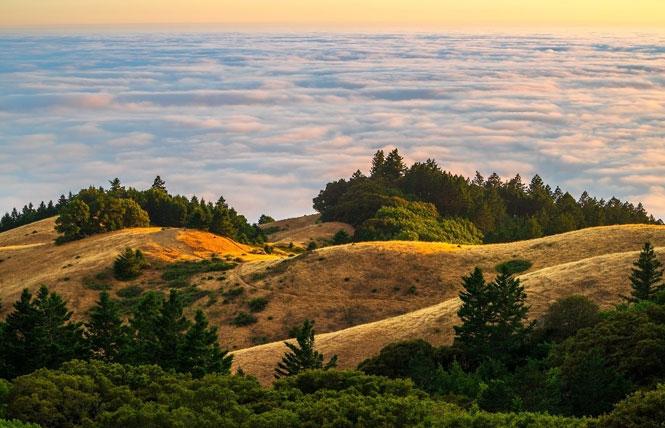 Mount Tamalpais State Park is one of many expected to participate in the new initiative to provide free day access to library cardholders. Photo: Courtesy CA State Parks Foundation

California State Parks and the California State Library have announced a new program whereby people can check out park passes at their local library for free vehicle day use entry to more than 200 participating state park units.

The program is the latest to advance safe and equitable outdoor access to all Californians, a news release stated.

"Spending time in nature is crucial to our mental health and well-being," stated first partner Jennifer Siebel Newsom. "We're lucky to have the largest state park system in the nation, and I'm thrilled to partner with California State Parks and the California State Library to make those spaces more accessible to California families."

As part of the three-year pilot program, each library jurisdiction, including mobile libraries, will receive at least three state library parks pass hang tags per branch for checkout by patrons. These park passes will enter library circulation in April and May. Library cardholders will be able to check out the pass, use it, then return it for others to check out. The pass is valid for entry of one passenger vehicle with capacity of nine people or fewer or one highway licensed motorcycle at participating parks.

"Libraries are trusted community hubs where Californians know they can find what they need to work, play, and thrive," stated Greg Lucas, state librarian. "This partnership with the state parks now allows Californians to 'check out' California's great outdoors at their community library."

The release noted that the 2021-22 state budget included initiatives to advance equitable access to state parks and open spaces. A $9.1 million one-time general fund investment was included in the budget to launch a state parks pilot to expand parks pass distribution, especially for youth in disadvantaged communities. The pilot includes an adventure pass program that provides free day-use passes for fourth graders and their families, the revamped Golden Bear Pass program for seniors over 62 and other groups, and the new library parks pass.

The funds raised will be used to promote health, wellness, and social justice for communities most impacted by HIV/AIDS through sexual health and substance use services, advocacy, and community partnerships, according to the website.

Interested people can sign up to be volunteer ambassadors, who collect donations and are assigned a restaurant partner to promote. Ambassadors greet and thank diners the day of the event.

Attendees will have an opportunity to network with city agencies, community-based organizations, and other job seekers; directly engage with city recruiters and ask questions about the benefits of city employment; and learn more about different career pathway programs the city offers, including the Access to City Employment program, ApprenticeshipSF, and the SF Fellows program.

According to a news release, the city is looking for students eager to represent the interests, needs, and concerns of young people in the Hayward community and to provide input to elected officials in the city, the Hayward Area Recreation and Park District, and the Hayward Unified School District about issues that affect youth.

Youth commissioner responsibilities include attending meetings, currently via Zoom, the first and third Monday of the month from September to June (except holidays), and working on special projects that address current youth issues. Applicants must be between 13-20 years old at the time of appointment and live in the City of Hayward or within the boundaries of the school district. Applicants under 18 must have parent/legal guardian consent.

The deadline for submitting applications is May 20. For more information and to apply, click here.

Santa Clara seeks commissioners
The city of Santa Clara has openings on several commissions and interested residents can apply.

There are two openings on the Parks and Recreation Commission, with the terms ending June 30, 2026. There is a full-term opening on the Planning Commission and a full term on the Senior Advisory Commission, also ending in June 2026. Finally, there is a partial term on the senior panel that ends in June 2025.

The application deadline is April 27. To apply online, click here.

Hawaii museum exhibit to showcase gender diversity
While some U.S. states seek to curb rights of trans students and others in the LGBTQ community, Hawaii is celebrating its long history of gender diversity and inclusion this Pride season through a museum exhibit, documentary film, and children's picture book about the story of Kapaemahu.

According to a news release from the Kapaemahu Collective, legend has it that four stones were set on Waikiki Beach as a monument to four extraordinary mahu — individuals of dual male and female spirit — who brought the healing arts from Tahiti to Hawaii long ago. The stones have survived for centuries, but the story behind them has been suppressed and the respected role of mahu has been erased from the monument's plaque.

The exhibit, titled "The Healer Stones of Kapaemahu," will be at the Bernice Pauahi Bishop Museum June 15-October 18. It is an immersive multimedia experience that features the short film, "Kapaemahu," newly discovered archival documents, art, and interactive elements to explain how, why, and who rendered the mahu in Kapaemahu invisible in modern times.

"This exhibition presents our Hawaiian view of gender duality as a natural aspect of the human experience," stated Hinaleimoana Wong-Kahu, a curator of the exhibit who herself identifies as mahu.

An accompanying PBS documentary further explores how the story was shaped by foreign influences, including the presence of the U.S. military and religious fundamentalism in Hawaii throughout the 20th century. After being buried beneath a bowling alley in the 1940s, the stones were unearthed in the 1960s only to encounter a wave of prejudice and legal discrimination that resulted in mahu entertainers being forced to wear an "I am a boy" button to avoid arrest, the release stated.

The children's book is a large picture format that tells the story of Kapaemahu through English and Hawaiian text. It is expected to be distributed for free to many schools and libraries by LGBTQ educational groups, the release noted.