LGBTQ Agenda: Nearly 60,000 adolescents would be harmed by anti-trans laws in US, report says 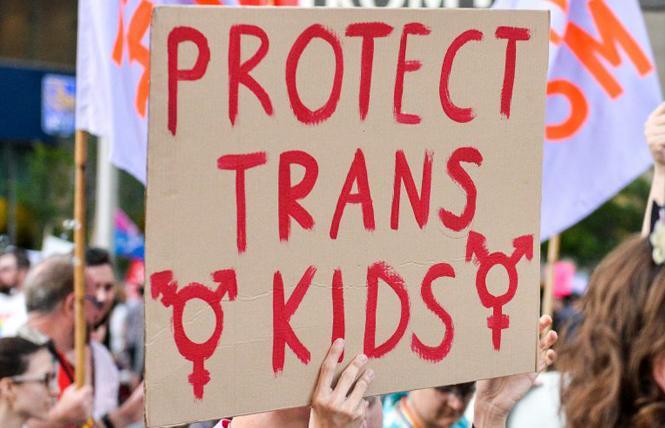 As the American right continues its onslaught against transgender people throughout much of the country, the toll the attacks are taking on the objects of their obsession is becoming much clearer. More than 58,000 adolescents in 15 states will be forced to bear the brunt of those attacks if proposed legislation in those states becomes law. In some cases, the legislation has already been signed.

According to the Williams Institute, a research center working on sexual orientation and gender identity law and public policy at UCLA School of Law, 15 primarily Southern states have enacted, or are considering, legislation limiting or blocking entirely access to gender-affirming care for kids and young adults between the ages of 13 and 20. Even more galling to advocates are the penalties with which medical personnel and even the kids' parents are threatened if they offer or pursue such care.

In addition to 10 Southern states, Arizona, Iowa, Kansas, Missouri, and Ohio have all introduced some form of legislation putting the well-being of trans kids in jeopardy.

"In each of these states, the bills would either criminalize health care providers who provide gender-affirming care to minors or subject them to discipline from state licensing boards," according to the Williams Institute report. "Bills in 10 states would also allow individuals to file civil suits for damages against medical providers who violate these laws. Bills in six states provide penalties for parents who facilitate minors' access to gender-affirming medical care."

After the Williams Institute report was issued last month, a similar bill was signed into law by Alabama Governor Kay Ivie (R) in April. Senate Bill 184 prohibits parents from obtaining essential medical care for their transgender children by imposing criminal penalties on them and their children's doctors for providing that care, according to a news release from the National Center for Lesbian Rights, which has joined with other LGBTQ and allied organizations to file a lawsuit against it.

Punishment can include up to 10 years in prison, according to the new law.

Two doctors, Morissa Ladinsky and Hussein Abdul-Latif, both providers at the Children's Hospital of Alabama and members of the medical staff at the University of Alabama at Birmingham Hospital, joined the organizations in challenging the law, the release stated, along with two Alabama families.

"By signing SB 184 Governor Ivie has told kind, loving, and loyal Alabama families that they cannot stay here without denying their children the basic medical care they need," Ladinsky stated. "She has undermined the health and well-being of Alabama children and put doctors like me in the horrifying position of choosing between ignoring the medical needs of our patients or risking being sent to prison."

Joining NCLR in representing the plaintiffs are the Human Rights Campaign, GLBTQ Advocates and Defenders, the Southern Poverty Law Center, and attorneys with King and Spalding LLP and Lightfoot, Franklin, and White LLC.

The plaintiff families are proceeding anonymously to protect their children. One of them, known in court documents as Robert Roe, stated in the release that his trans daughter is now an "engaged, happy child once we got her the support and care she needs." Born and raised in Alabama, he said his family may be forced to leave the state.

The country's transgender kids have become the new punching bags for right-wing politicians who are eager to stir up their bases of support as the United States approaches midterm elections later this year. Lawsuits in two of the states, Arkansas and Texas, have blocked those states' legislative efforts from being put into force but there's plenty more dangerous legislation to go around.

In addition to criminalizing gender-affirming care, lawmakers are careful to be as thorough as possible. Roughly half the bills also bar insurance providers from providing coverage for such care by enacting restrictions on the use of state monies or facilities in gender-affirming care. They even go so far as to exclude it as a tax-deductible health care expense, according to the Williams Institute report.

Arkansas' particularly onerous legislation, HB 1570, was passed by the state's Legislature in 2021 but was vetoed by Governor Asa Hutchinson (R), although his veto could hardly be considered an act of compassion. His reason for vetoing the bill, which he called "well intended," was that it was "overbroad, extreme, and does not grandfather those young people who are currently under hormone treatment," the New York Times reported. "The state should not presume to jump into the middle of every medical, human, and ethical issue."

Only a month before, however, Hutchinson had signed bills permitting doctors to refuse to treat people based on their own religious or moral objections as well as legislation prohibiting transgender women and girls from playing on women's and girl's athletic teams at the high school and university levels.

In any case, the Arkansas General Assembly overrode Hutchinson's veto but the law is still on hold. The Arkansas branch of the American Civil Liberties Union filed suit in July 2021, just days before the bill was expected to go into effect, and the law was temporarily blocked. The ACLU's lawsuit is still pending.

There are bright spots, of course. Here in California, as the Bay Area Reporter previously reported, gay state Senator Scott Wiener (D-San Francisco) has proposed legislation that would, essentially, make the state a haven for refugees from all those other states that seem so intent upon criminalizing trans people and their families and supporters. That legislation, which is expected to appear in print by April 26, according to Wiener's aide Jack Persons, would provide legal refuge to trans kids and their families fleeing potential prosecution for pursuing gender affirming care in their home states.

As laudable as Wiener's legislation is, however, it only protects those who manage to make it to California. The vast majority of those 58,000 adolescents and young adults will still have to endure the persecution launched against them by their own state governments.