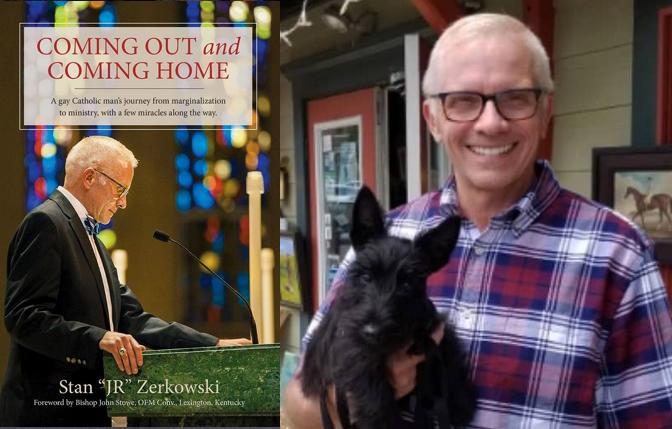 In his new memoir, Coming Out and Coming Home, Stan JR Zerkowski writes about how he never intended to be a national spokesperson for LGBTQ Roman Catholics.

But Zerkowski said that for us all, "There is a plan in the end" we can't necessarily control.

Zerkowski, the executive director of the LGBTQ Catholic-affinity group Fortunate Families and director of Catholic LGBT ministry for the Diocese of Lexington, told the Bay Area Reporter that he wrote his memoir so that people might see "There is hope, there is light at the end of the tunnel."

Yes, you read that correctly. Zerkowski is openly gay and not only a church employee, but the head of ministry to queer people in the diocesan structure.

His boss, the Most Rev. John Stowe, the bishop of Lexington, wrote the forward.

Stowe said he hasn't had any pushback for writing the forward to the book, but has been criticized for his relatively more liberal approach to LGBTQ people.

"I've gotten all kinds of pushback before," Stowe said.

The Catholic Church officially teaches that homosexual actions are sinful and that, therefore, LGBTQ people should remain celibate.

Zerkowski said that the book covers his journey "from marginalization to ministry."

"The story I share shows that even though one can be terribly marginalized and treated poorly — even having to hide part of who they are for a long time — those things can lead to coming out and coming home," Zerkowski said.

Zerkowski has been employed for 11 years by the Diocese of Lexington, Kentucky.

"My book talks about years of pain," Zerkowski said. "Years of being told 'Don't present yourself for communion.' Years when my own pastor was asking inappropriate questions about my life."

Zerkowski said that when he did come out, he threw himself into working in the community. He helped spearhead two groups for LGBTQ students at Catholic high schools and helped facilitate the first Pride interfaith service in Lexington.

Zerkowski "never had a desire to be a national person, a speaker."

"I never believed I would have a ministry under the auspices of the diocese," he said, but "as doors opened I walked through them."

More recently, he began leading the LGBT ministry with the diocese at Historic Saint Paul Church, and founded Fortunate Families.

The B.A.R. spoke with Zerkowski for an article last year about Greg Bourke, a plaintiff in the Obergefell v. Hodges case that legalized same-sex marriage, who also wrote a memoir. Zerkowski said that the book was "two years in the making."

"Some of it was written for a monthly publication here in the Bluegrass [LGBTQ magazine]," Zerkowski said. "Some of it was based on articles in LinQ," which is another magazine.
Zerkowski had the book published through Butler Books, not for want of another publisher, but because he trusted publisher Carol Butler, he went with her.

"I never did any of this to build my name or be a big seller," Zerkowski said. "I did this to end up in Catholic schools so students can say 'There's hope for me. There's hope in this church.'

"When we can be our authentic selves, and we can be honest about who we are, that's when we really shine through," he said.

Journalism was a calling for gay Catholic man

Frank Bruni's memoir, 'The Beauty of Dusk'
Sign up!