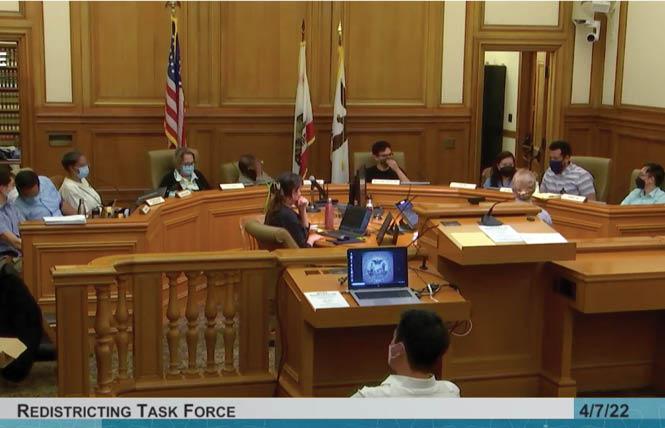 The San Francisco Redistricting Task Force dissolved into chaos in the early hours of Sunday as it worked to finalize a new map for the city's 11 supervisorial districts. Photo: Screengrab

To the dismay of LGBTQ advocates, the proposed San Francisco electoral map for the next decade cleaves the Tenderloin apart from the South of Market neighborhood. But it does preserve the residence of the lone LGBTQ member of the Board of Supervisors in his current district.

The San Francisco Redistricting Task Force is set to meet Wednesday to vote a final time on its new maps for the city's 11 supervisorial districts. It is obligated by the city's charter to deliver the new boundaries to the supervisors by April 15.

After holding another marathon meeting April 9 that dragged into the early morning hours of Sunday, the nine-member volunteer body dissolved into chaos near 2 a.m. with four members walking out on the proceedings. The remaining five members voted at 3:25 a.m. on a map that will dramatically alter the local political landscape. It can be seen online here.

It brought to a close a particularly chaotic week for the redistricting process. It began with the task force's vote near 3 a.m. Tuesday, April 5, to abandon a map it had coalesced around just days earlier that would have kept the Tenderloin in District 6 and had wide support among the public.

But as the task force members tried to balance the city's population over all 11 supervisorial districts, they reached a roadblock and opted to take up a different map as their starting point. It led to howls of protest and accusations of behind-the-scenes chicanery culminating with the city's elections commission holding a hearing Friday that could have led it to replacing its three appointees to the redistricting task force.

It decided to remain in support of the trio, finding they had done nothing to merit being removed. Nonetheless, a number of the elections commissioners echoed the concerns others had raised that the task force was ignoring the voices and needs of marginalized communities, including that of the LGBTQ community.

As the Bay Area Reporter has detailed over the last two weeks, LGBTQ residents and leaders have been particularly vocal about their concerns over how the task force is redrawing the boundaries of the city's historic LGBTQ neighborhoods in the Castro, Tenderloin and SOMA. Leaders of the Transgender District in the Tenderloin and the Leather & LGBTQ Cultural District in western SOMA had repeatedly demanded that they be kept together in the new District 6.

But with the bulk of the city's population growth over the past 10 years occurring in District 6, the task force struggled to find a way to redistribute the area's residents they could support that would result in western SOMA and the Tenderloin remaining together in one district. An attempt to do so fell apart near 11:30 p.m. April 9 due to concerns from some members of the task force over a trade off of putting most of Russian Hill into District 2 from District 3.

Voting against that map were task force members Matthew Castillon, Lily Ho, Chasel Lee, Ditka Reiner, and chair the Reverend Arnold Townsend. Close to 2 a.m. the same bloc of task force members voted on a map that moved the Portola and University Mound into District 10 from District 9, and moved Potrero and Dogpatch from D10 into D9.

It followed an earlier vote where Reiner was the fifth vote to reject such a move. But after coming back from a break in the proceedings, Reiner said she had voted wrong and called for rescinding the earlier vote. Once that passed on a 5-4 vote, she cast the fifth vote needed to alter the boundaries of Districts 9 and 10.

The turn of events led to bedlam and prompted task force members Jose Maria (Chema) Hernández Gil, Jeremy Lee, Raynell Cooper and J. Michelle Pierce to walk out on the meeting. Before leaving the hearing room Pierce specifically called out Townsend for betraying the city's African American residents he repeatedly had said at multiple meetings he wanted to protect.

"No love for the Black community with that vote," she said, adding that it amounted to "ethnic suicide."

Despite seeing his preferred outcome of having the Portola be moved into District 10, which had been voted down twice before, Chasel Lee expressed his own disappointment in how things had transpired. The task force had "completely lost the public's trust," he said, at that point.

"I have no words," said Lee. "I think we deserve the public's anger tomorrow."

As for Reiner, she acknowledged, "I am going to be vilified for this. It was my mistake."

On Twitter Edward Wright, president of the Harvey Milk LGBTQ Democratic Club, expressed his disbelief at what was transpiring.

"I genuinely can't believe what I'm watching. This is a sham, and the members still sitting in chamber should be ashamed," he wrote.

Peraza also tweeted that "the early hours of the morning seem to be the most scandalous hours" for the redistricting task force.

With members of the public still present in the hearing room yelling at the remaining task force members for their decision, Townsend called for another recess at 2:48 a.m. They reconvened again at 3:21 a.m. to proceed with their vote to adopt the proposed map.

While the leather district and a small section of the trans district along 6th Street are set to still be in District 6 with Mission Bay and South Beach, the Tenderloin will move into District 5. It will be combined with the Western Addition, Japantown, Alamo Square and the Haight.

The redrawn District 5 will also result in its current supervisor, Dean Preston, being in the same supervisorial boundary as that of District 6 Supervisor Matt Haney, who lives in the Tenderloin. Haney may depart for the state Legislature, however, should he be elected April 19 to the vacant 17th Assembly District seat. (Gay former District 9 supervisor David Campos is also seeking the legislative seat.)

Preston and Haney had both raised objections in recent days to how the task force was redrawing both their districts. Residents of the two areas had also spoken up against the new maps, while progressive leaders predicted the new boundaries would make it easier for more moderate candidates to be elected in the two districts.

Townsend, however, complained that by not combining the Tenderloin with the other areas of District 5, the city's Black voters would continue to be disempowered.

"We are marginalizing the African American vote and we are doing it as good as they've done in Georgia," he said during discussion on a map that would have left the Tenderloin in District 6.

District 8 to see changes
To the relief of gay District 8 Supervisor Rafael Mandelman, he will be able to seek reelection in November to a final four-year term under the proposed map. The block of Valencia Street between 24th and 25th streets where he owns a home is remaining a part of District 8.

But much of the district's current eastern boundary with the Mission-centric District 9 is set to move west. It will run along Guerrero Street beginning at 24th north to Duboce Avenue.

The task force made the change at the urging of Latinx and Indigenous groups that wanted to see more of the Mission Dolores neighborhood be placed in District 9. It also had set a policy of not drawing district lines down the middle of commercial corridors, such as how Valencia currently separates District 8 from District 9.

All three of the gay formerly elected District 8 supervisors — Scott Wiener, Bevan Dufty, and Mark Leno — had objected to seeing such a change be implemented in an April 8 letter submitted to the task force. They argued it would diminish the political power of the city's LGBTQ community.

"With LGBTQ+ representation on the San Francisco Board of Supervisors at its lowest level since the return of district elections, and LGBTQ+ people under attack across the country, it is critical that you keep the LGBTQ+ community together in District 8," wrote Wiener, now a state Senator; Dufty, who serves on the regional BART transit board; and Leno, who was the first one elected to the D8 seat in 2000.

The LGBTQ Castro district will remain at the heart of the new District 8, which will also maintain Glen Park, Noe Valley, Diamond Heights, Duboce Triangle, Corona Heights and Twin Peaks. Its northern boundary will be extended to include Cole Valley and Ashbury Heights.

The redistricting task force is set to next meet at 5:30 p.m. Monday, April 11, and again at 3 p.m. Wednesday, April 13. For information about both meetings, visit the task force's website here.