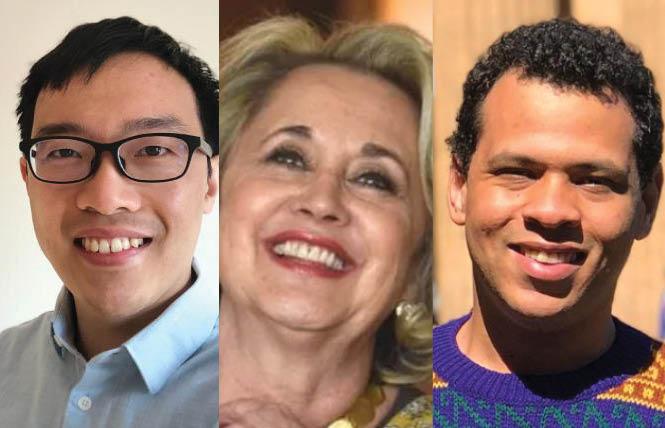 After pressing its three appointees to the city's redistricting task force about how they have approached their job of redrawing the city's 11 supervisorial districts, the San Francisco Elections Commission Friday rejected calls that they remove the trio. It came less than 24 hours of when the new political map is to be posted ahead of a final vote next week.

"I think it is quite important to respect the independence of the task force," said Lucy Bernholz, a lesbian who is president of the elections commission.

Fellow commissioner Cynthia Dai, a lesbian who served on California's statewide redistricting panel in 2011, said she didn't want to "blow up" the redistricting process by removing the appointees. She felt the hearing held Friday was necessary, however, to investigate the concerns that had been raised about how the task force members were handling their job.

"We do have a responsibility as an appointing authority to make sure our appointees are living up to their mandate," said Dai. "I think this hearing was an attempt to ascertain that. I think we were very respectful toward our appointees."

"We should be embarrassed we put them in a position where we suggested they had impliedly engaged in some kind of malfeasance," said Jung, who argued they had "done harm" to the appointees.

The commission's motion, approved unanimously 6-0, expressly stated it had found no reason for the appointees to be removed and "applauded them for their hard work." Becca Chappell, commission vice president, said if a more formal apology needed to be issued that could be addressed at a later date.

Groups such as the League of Women Voters, Asian Americans Advancing Justice - Asian Law Caucus, and ACLU SF Chapter had raised concerns to the elections body about its trio of appointees on the San Francisco Redistricting Task Force. They include queer task force member Chasel Lee, along with vice chair Ditka Reiner and Raynell Cooper.

Yet, when asked by the elections commissioners if they supported the calls for removal of their appointees, none of the organizations called for the task force members to be removed at Friday's meeting, nor would they cite specific examples of illegal actions the appointees have taken. Rather, they criticized them and the rest of the task force for not listening to the input from marginalized communities, including the LGBTQ community, on the map-making process.

When pressed if the ACLU wanted the task force members to be removed, the legal group's Regina S Islas responded, "I am not an expert on this process."

Julia Marks, the voting rights program manager and staff attorney for the law caucus, said the elections commission should be asking "is it clear the task force is listening to the community?"

All three of the elections commission appointees forcefully defended their work as not being grounded in anything other than the task they were given to equally distribute the city's population among the 11 districts. Lee noted how they spent the past seven months reaching out to the public, especially marginalized communities, in order to get their feedback into the redistricting process.

"I think we have done a good job uplifting those voices," said Lee, stressing that the task force has to make "hard decisions" that are not going to please everyone. "We often made those decisions with heavy hearts but we make those in good faith."

He pointed out the task force members are unpaid volunteers and "not polished" politicians with consultants. They signed up "to make a fair and equitable map for San Francisco" because they "love" the city.

Cooper told the elections commissioners that he and his fellow task force members take their commitment "seriously" to not draw the new lines based on politics.

"All of our members are acting in good faith to that commitment, including myself," he said.

Reiner said the letters sent by the league of women voters and the other groups surprised her. She defended the task force's work to date, contending that no matter what it decides, people are going to be upset.

"A lot of people feel we are not listening to them," she said, "that is because we can't do everything people want."

Redistricting task force chair the Reverend Arnold Townsend, a former elections commissioner, defended his fellow members, calling them the "hardest working people we got." He argued there was no reason for them to be removed and that they have been hearing what the public has been telling the task force.

"There's a difference between me not listening to you and you not getting your way," he said.

The special April 8 meeting threw a controversial wrench into the already chaotic redistricting process that is supposed to wrap up by April 15. For weeks various neighborhood groups and residents have expressed their anger at the proposed new boundaries the redistricting task force has been considering.

As the Bay Area Reporter has detailed over the last two weeks, LGBTQ community members and leaders have been particularly vocal about their concerns over how the task force is redrawing the boundaries of the city's historic LGBTQ neighborhoods in the Castro, Tenderloin and South of Market. Leaders of the Transgender District in the Tenderloin and the Leather & LGBTQ Cultural District in western SOMA have demanded that they be kept together in the new District 6.

Yet, as it stood on Friday as the redistricting task force once again reconvened, the Tenderloin would be in a new District 5 with the neighborhoods of Western Addition, Japantown, and Alamo Square. It also appeared that the Haight and Lower Haight neighborhoods would remain in District 5 rather than be carved into District 8 with the Castro.

But it remained unclear if gay District 8 Supervisor Rafael Mandelman's residence on Valencia Street would remain in his supervisorial district. The redistricting task force has seesawed between moving the block of Valencia between 24th and 25th streets where he owns a home into District 9 and keeping it in District 8. It has thrown into question if Mandelman, the lone LGBTQ member of the Board of Supervisors, will be able to seek reelection to his District 8 seat in November.

The entire redistricting task force came under intense criticism this week when it voted at nearly 3 a.m. Tuesday, April 5, to abandon a map it had coalesced around at its April 2 meeting that was widely supported by the public. It would have kept the Tenderloin in District 6 with western SOMA and Mandelman in District 8.

But as the task force members tried to balance the city's population over all 11 supervisorial districts, they reached a roadblock and opted to take up a different map as their starting point. It led to howls of protest and accusations of behind-the-scenes chicanery culminating with the elections commission's decision to bring its trio of appointees before it and ask them directly what had happened.

"That 3 a.m. vote was a consensus," noted Reiner. "That night we came up against an impossibility of numbers" and "hit a wall."

She conceded the vote probably should have been postponed to the task force's next meeting. Nonetheless, Reiner said, "We were trying to do the right thing. We care and we take our responsibilities really seriously."

Cooper chalked up the impasse to the fact that after the task force had voted to move forward with what is known as Map 4D on Saturday, they couldn't come to agreement on how to make it a final, workable way to equally divide up the city and its neighborhoods.

"4D was a much more difficult starting point than we imagined," he said, adding that at the end of their deliberations a few days later, "at a certain point the only way forward with that map was to make some changes we did not feel as a task force we were comfortable making."

Plus, "given where we were Monday night," added Cooper, "it didn't seem there was a way possible to move forward on 4D in a way members of the public would have supported."

As to their vote that evening, "we made the choice to call it there and choose to discuss a different map," he said. "This was not a flip flop or a reversal."