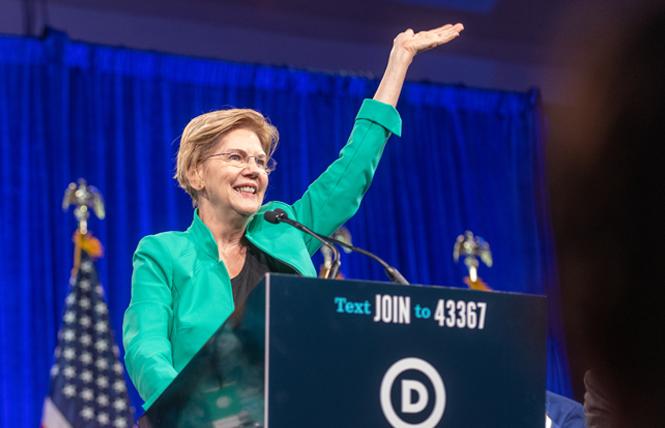 In 2020, for the first time in recent memory, our California primary votes will matter. Most presidential election years the nominations are pretty much wrapped up by the time California weighs in. Not so this year, when Californians will be voting by March 3, three months earlier than our traditional June primary. There are, and have been, many great candidates in this primary contest, but my choice is Elizabeth Warren.

I have known of Warren since I was in graduate school at Harvard taking classes at the law school, where she taught. Back then she had a reputation as an extraordinary teacher, someone who could actually make a class on bankruptcy riveting. Over time, of course, her reputation would spread beyond Harvard's ivory (well, red brick) tower. A decade later I would hear of her again, as she worked to establish the Consumer Financial Protection Bureau to ensure that, following the Great Recession, everyday people would be better protected from the greed and avarice of the wealthy and reckless. In 2012, I was thrilled to see her challenge and knock out an incumbent Republican in Massachusetts to win election to the United States Senate. I wanted her to run for president in 2016, and this year I believe she offers Democrats the best chance to unify our party and beat President Donald Trump.

The race is still far from decided, with no clear front runner, but Warren has captured hearts and minds with her energy, her persistence, her willingness to spend countless hours on the selfie lines, and, of course, her plans for just about everything. Her website currently has more than 70 such plans, detailed expositions and proposed solutions on issues ranging from health care to climate change to bringing competition to the tech sector. She has successfully established herself as the smartest candidate in the race.

In her intelligence and policy depth, as in so many other aspects, she is the antithesis of the current occupant of the White House. For the last three years the United States has endured a president who is the definition of "toxic masculinity." If ever there were a moment for the United States to finally elect a woman as our leader it is this one. And recognizing that there could have been no LGBTQ rights movement without the women's liberation movement, I know that a Warren presidency would be a major advance not just for women, but for all those who chafe against the constraints of patriarchy.

There is no candidate better prepared to tackle the challenges of this moment in American history: income inequality, the plight of the American middle class, a toxic political culture. The truth is that Trump is a symptom, not the cause, of the illness affecting our body politic. Warren — thoughtful, exuberant, committed to binding us all together in a web of mutual obligation — could be the cure. Where Trump exemplifies and foments selfishness and division, Warren reminds us that we're all in this together. If you have made it in America, she tells us, good for you, but you did it with help from others, and you need to "pay it forward for the next kid who comes along."

Warren recognizes that the times call for radical change. Her website boldly announces: "It won't be enough to just undo the terrible acts of this administration. We can't afford to just tinker around the edges — a tax credit here, a regulation there. Our fight is for big, structural change." But Warren also presents an opportunity to bring together a party that must go into November united.

Barack Obama and Bill Clinton are the only two Democrats to be elected in the last 40 years. They share an important trait: both are excellent communicators. I do not believe there is a better communicator in this year's Democratic crop than Warren. This year more than ever, we need a candidate capable of making our best case to Americans who might not immediately see the world the same way we do in our blue bubbles. Warren has decades of experience explaining difficult concepts to law students, and it shows. And I can think of no one I would rather send onto a debate stage to champion the beliefs and values of blue America than Elizabeth Warren.

Rafael Mandelman represents District 8 on the San Francisco Board of Supervisors, where he is the lone LGBT member. He formally endorsed Elizabeth Warren last week.