Guest Opinion: The day I was told I didn't belong in society 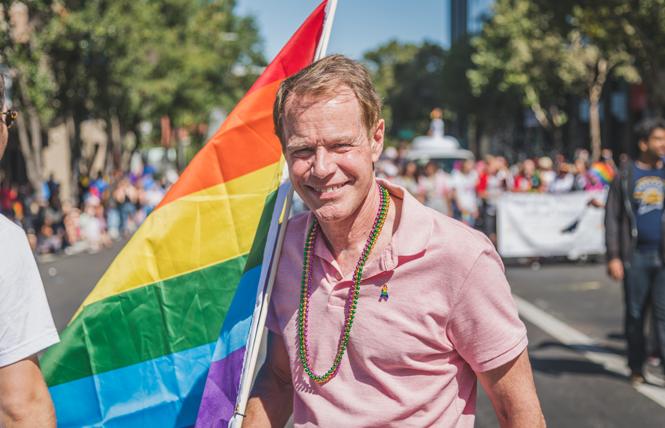 It was in early 1984 when I picked up the Sunday San Jose Mercury News and read an opinion piece by a local state Assembly member stating that homosexuals should have no legal, social, or political standing in society.

It was a remarkable statement. The Assemblyman, Alister McAlister, was urging then-Governor George Deukmejian (R) to veto Assembly Bill 1, the law passed by the Legislature that would make it illegal to discriminate based on sexual orientation. If such laws were passed, he argued, LGBTQ people would become a legitimate class deserving of legal protection. (Deukmejian did, in fact, veto the bill.)

I was a 31-year-old gay man, out to my friends but not to others. I was well aware of the hatred and persecution that gay people faced but this was the first time I had seen someone phrase it so bluntly: You are undeserving of the benefits provided by society.

I had come to San Jose when I was 18 to start a new life away from the conservative hometown where I grew up, where I knew I couldn't be gay. I graduated from San Jose State University with a degree in political science and held numerous jobs working on public policies to improve my adopted city.

Outraged by the time I finished reading McAlister's op-ed, I felt my contributions, along with those of my LGBTQ friends, were not just devalued but unwanted.

Putting the paper down, I said to myself: "Ken, if you don't fight for your rights to be a part of this community then no one else will." I came out publicly a week later in a Mercury News opinion piece denouncing McAlister and arguing for acceptance of gays and lesbians (the term that was used then) as full participants in society.

Coming out allowed me to co-found a South Bay political organization BAYMEC — the Bay Area Municipal Elections Committee — which still is in existence today. The skills I learned and the people I met through that political work allowed me to run for office in 1992 and become the first openly gay elected official in Santa Clara County.

Much has changed since 1984 but much still hasn't. For starters, we have a vice president who feels the same way about LGBTQ people as McAlister. He'd allow discrimination against gay people based on religious convictions in a second.

In California and in other blue states there are now laws that provide protections in housing and employment. Shamefully, 26 states still do not, and Congress has been unsuccessful in passing federal legislation.

Trans people — who have been invisible for so long — are gaining their rights but the religious conservatives, encouraged by President Donald Trump, are pushing back. Their path to full equality is constantly being blocked, from tactics such as opposing gender-neutral bathrooms and not allowing trans people to serve in the military.

Part of the ways that society can recognize the existence of LGBTQ people is to provide services to them and include them in everyday affairs. One symbolic way to do this is to provide proclamations during LGBTQ Pride Month and to raise the rainbow and transgender flags.
When I served on the Santa Clara County Board of Supervisors from 2007 to 2018, I was able to have the rainbow and trans flags fly every workday throughout the year. I wish more government entities would do the same to show their constant support for all LGBTQ employees and residents.

Clearly flags aren't enough though. City and county governments do a poor job serving the needs of the LGBTQ community. Whether it's dealing with LGBTQ foster youth, meeting the needs of LGBTQ inmates, or conducting STD tests, many workers are not culturally sensitive. That is one reason why I felt it was necessary to create the Office of LGBTQ Affairs, the first such county office in the nation. With a staff of 10, the office has taken on a wide spectrum of issues to improve services to the LGBTQ community.

Santa Clara County was slow to respond to the unique medical and health needs of our trans population. Too often, trans people had to leave the county for services but at my initiative that now has changed. We have a fully staffed transgender health clinic serving trans, nonbinary, and gender-nonconforming individuals.

I remember all too vividly the awful days of the AIDS epidemic. I have always felt an obligation to do all I could to help stop the spread of the disease and to provide services to those who are HIV-positive. Several years ago, I was able to have the county provide $6 million over four years to fund a Getting to Zero campaign — zero deaths, zero infections, zero stigma.

After being an elected official for 26 years, I am now turning my attention to the work of the nonprofit BAYMEC Community Foundation. The foundation has three main objectives.

The first is to educate high school and college students on LGBTQ issues and history. Although our community has made impressive gains since the Stonewall riots 50 years ago, often younger people are not given the opportunity to learn about our history. The second is to ensure funding and support for LGBTQ programs and services, especially now that there is no openly LGBT county supervisor. The third is to conduct seminars to nurture the next generation of LGBTQ leaders. It is incumbent on the older generation to make sure the next generation has the knowledge and tools to carry on the fight when inevitable backlashes come.

The right to be a full participant in society has been part of my mission since that Sunday morning in 1984. Looking back, it has become clearer to me how important the role of government is in helping LGBTQ people be part of our national discourse. Society is all the better because of its LGBTQ citizens, and our government must continue to recognize us in every legal, social, and political way.