A grand experiment to save the Stud 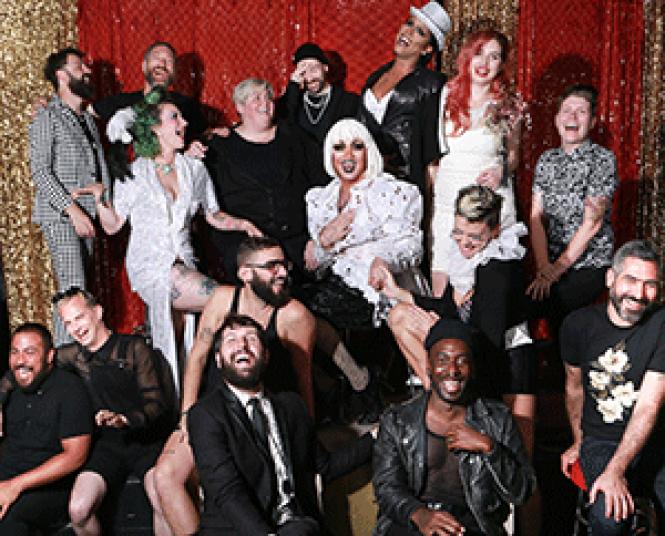 Members of the SOS Save Our Stud Collective are working
to preserve the popular LGBTQ bar. Photo: Cabure A. Bonugli/Shot in the City

When the Stud's owner-manager Michael McElhaney announced in July that the 50-year-old nightclub's new landlords had almost tripled the rent, and that he was retiring to Hawaii, the news that San Francisco was going to lose another precious queer performance and gathering space was shocking â€" but, unfortunately, not unfamiliar.

In the past couple of years, the city has bid sudden, sad adieux to such storied watering holes as the Lexington Club, Marlena's, Esta Noche, and more. With the Stud's impending closure, it seemed like yet another punch in the gut to our legendary nightlife would be absorbed with a weary shrug and a "but what can you do?"

This time, however, some of us had had enough. Immediately after McElhaney's announcement, a coalition of performers, promoters, bartenders, DJs, and nightlife-lovers came together to form the SOS Save Our Stud Collective and come up with a plan not only to save the Stud, but to hopefully preserve vanishing queer spaces in cities throughout the world.

The rise of hookup apps and the assimilation of gay culture in urban areas provide tidy (and mostly anecdotal) explanations in a mainstream narrative of decline, but the truth is that gay nightlife is more popular than ever. The drag scene has exploded thanks to outlets like RuPaul's Drag Race , an international "underground" gay dance music movement is thriving, and nostalgia for vintage gay after-dark experiences is at a peak.

And there are real-world success stories. The 33-year-old Eagle has transformed itself into a vibrant party destination, and the recently opened Oasis is providing a stage for sparkling oodles of renowned performers. There is also tragedy; as the horrific Ghost Ship fire pointed out, the need for safe, accessible, artful queer spaces is more necessary than ever.

No, the main culprits in the Case of the Vanishing Gay Clubs, at least in San Francisco, are cost and will. Who has the money and time to open and operate a wonderfully weird, freeform, community-inclusive LGBT space like the Stud when rents are skyrocketing and many of us are struggling to pay our own bills?

One creative answer, we believe, is coming from the Stud Collective. We're embarking on a grand experiment, which we hope will provide a blueprint for saving other queer spaces.

The Stud Collective is a worker-owned cooperative, along the lines of Rainbow Grocery or Arizmendi Bakery, and its 16 members (including me) are purchasing the Stud business and liquor license. From programming and bartending to cleaning and paperwork, we're an all-hands-on-deck operation, each of us honing our areas of expertise while acquiring new skills. When we take possession of the business at the end of the year, the Stud will be the first nightclub in the country operated cooperatively.

We are dedicated to preserving the vibe and honoring the legacy of the Stud, the city's longest-running gay nightclub. Last month we secured Legacy Business status from the city, which will qualify us for various forms of assistance. Earlier this month, we negotiated a two-year lease from the new landlords at an affordable price, ensuring the Stud's doors will remain open.

We're also looking to the future. The Stud will have to move when our lease at the current location is up. (The Stud moved before, in the 1980s, from where the Holy Cow is now.) We will be using every means at our disposal â€" bar income, city grants, crowdfunding, and good old-fashioned fundraisers â€" to find a suitable space to build out and keep the Stud doors open for another 50 years and beyond.

If successful, we hope to share our experiences as a model for others to preserve queer spaces in their own communities. But that means we will need the community's help and support. We invite everyone to join us at our first big party and fundraiser as the new Stud owners on New Year's Eve â€" http://www.studnye2016.eventbrite.com -- and to become part of our SOS Save Our Stud group on Facebook to learn more.

Especially after the recent election, we need places to gather and interact freely, to express ourselves and develop strategies of hope and resistance. For the new year, let's toast the revival of queer nightlife in San Francisco. Long may she reign.