Editorial: Glad to see GLAAD do its job 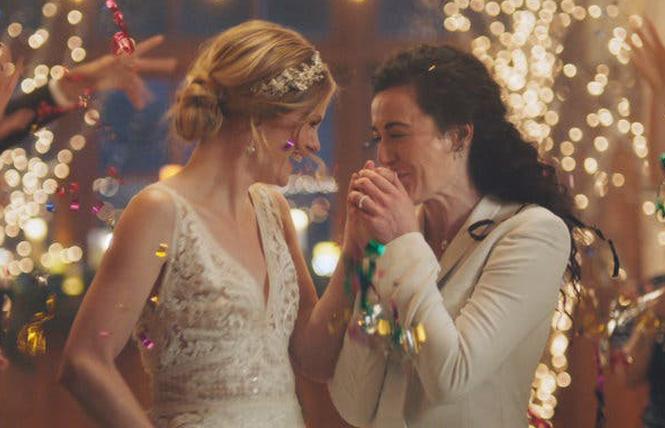 It's that time of year when viewers tune-in to the Hallmark Channel for an annual dose of feel-good holiday cheer — many are sappy romances with titles like "A Christmas Love Story" and "Holiday Date." This year, Zola, an online wedding registry company, began airing four same-sex wedding ads on the channel. Predictably, the anti-gay, dubiously named One Million Moms organization posted a petition calling for a boycott, and the channel's executives caved by pulling the ads last Thursday. That, of course, resulted in a backlash against the backlash, with GLAAD and many LGBTQs decrying the capitulation. By Sunday, just days after One Million Moms first condemned the ads, the channel reversed its decision.

"Victory!" GLAAD declared in a news release. We agree. After we criticized the LGBT media advocacy organization earlier this year — and in 2018 — for veering off course into politics by leading a national campaign for an LGBT constitutional amendment, it's reassuring to see the group actually returning to its mission: being a media watchdog for LGBTQ representation and related issues. GLAAD quickly created an online petition, its representatives appeared on CNN to discuss the situation, and it issued a statement slamming the channel for pulling the Zola ads. "The Hallmark Channel's decision to remove LGBTQ families in such a blatant way is discriminatory and especially hypocritical coming from a network that claims to present family programming and also recently stated they are 'open' to LGBTQ holiday movies," Sarah Kate Ellis, president and CEO of GLAAD, stated December 14. "As so many other TV and cable networks showcase, LGBTQ families are part of family programming. Advertisers on the Hallmark Channel should see this news and question whether they want to be associated with a network that chooses to bow to fringe anti-LGBTQ activist groups, which solely exist to harm LGBTQ families."

It's important to note, as GLAAD did, that LGBTQ-inclusive advertising has become increasingly popular for brands across industries, and plays an outsized role in enabling LGBTQ families to see themselves reflected positively in the media.

To their credit, Hallmark Channel executives heard the outrage and promptly announced last Sunday that the ads would be reinstated, though it is unclear if Zola will run them, according to an article in Fast Company. (Zola's ads are appearing on other networks.)

Perry went on to state that Hallmark Cards "is, and always has been, committed to diversity and inclusion — both in our workplace as well as the products and experiences we create."

He pointed out that Hallmark Cards has an inclusive track record. It has LGBTQ greeting cards, and features LGBTQ couples in its commercials. It's recognized as a "best place" to work by the Human Rights Campaign. That's partly why the channel's initial decision to cut the Zola ads was so surprising — it should not have buckled under One Million Moms' threatened boycott. While the TV channel does not yet include same-sex couples in its holiday movies, given what GLAAD's Ellis stated, it seems only to be a matter of time until that happens. Although, as the Washington Post's Drew Goins wrote this week, when it happens: "For Hallmark to stay soothing, there will be no disowning upon coming out, no religion-inflicted trauma, and only the lightest touch of humorous homophobia when the horse-drawn carriage driver is embarrassed to realize the two gentlemen in the back are not, in fact, brothers." In other words, "boring," as the headline to his piece stated. Even so, that's a good thing too.

For its part, Zola has been a frequent advertiser on the Hallmark Channel since 2017 and has aired ads featuring same-sex couples in the past without a fuss, a spokeswoman told the Wall Street Journal. Mike Chi, its chief marketing officer, said, "All kisses, couples, and marriages are equal celebrations of love."

As for GLAAD, we'd like to see it work with the Hallmark Channel on at least one same-sex romance infused with the holiday spirit for next year. Perry noted in his statement that the channel will be working with GLAAD to better represent the LGBTQ community "across our portfolio of brands."

No bah-humbug to that. Our lives deserve to be featured in saccharine holiday fare just like everyone else, because we exist too.