Editorial: Time for APE to work with the Castro 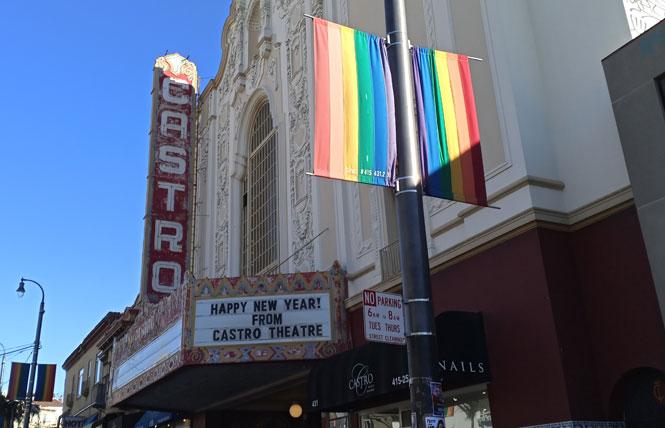 Neighborhood groups have become increasingly concerned since Another Planet Entertainment took over management and programming of the Castro Theatre. Photo: Scott Wazlowski

Since the surprising news in January that Another Planet Entertainment was taking over management and programming at the historic Castro Theatre, it's been our hope that APE and Castro stakeholders could work together on everyone's shared goal of rejuvenating a vibrant movie palace in the heart of San Francisco's LGBTQ neighborhood. Last week, however, the Castro LGBTQ Cultural District and numerous other groups and community leaders sent Gregg Perloff, APE chief executive officer, a letter expressing their concerns and requests. This wasn't the first attempt at engagement either. Shortly after the announcement was made by APE — which it later admitted that it "fumbled" — cultural district leaders reached out and requested a meeting. While APE representatives said that virtual meetings have taken place, those apparently are falling short for what the cultural district has requested. Since APE assumed management of the theater, APE spokesperson David Perry told us that four meetings have been held (all on Zoom): two with the cultural district staff and two with the Castro Merchants Association with members of the cultural district present. "In addition, just last week, we supplied them with detailed answers to a number of their questions and concerns," Perry stated to us April 13. "Two days ago, we reached out to them for a face-to-face meeting now that COVID protocols and scheduling allow, and are looking forward to that."

We hope so. From the perspective of the cultural district, these meetings have fallen flat. In a news release accompanying the letter to APE, cultural district manager Tina Valentin Aguirre stated that APE is "refusing to meet with us or respond with substantive answers to detailed concerns that we have presented to them privately and now publicly."

"I was cautiously optimistic in early February," Aguirre added. "In the past two months, APE has not met with us despite multiple attempts on our part. I now fear that their commitment to dialogue was less than genuine."

The cultural district was joined in its letter by the Castro Merchants; evidently that group, too, despite having APE officials address its members, feels that more information is needed. Additional signatories include the Frameline Film Festival, which uses the theater for much of its LGBTQ film festival and thus, has a major interest; the Leather & LGBTQ Cultural District; the SOMA Pilipinas — San Francisco's Filipino Cultural Heritage District; Friends of Harvey Milk Plaza; the city's two LGBTQ Democratic clubs; and preservation groups like Heritage SF, the Art Deco Society of California, and the Tenderloin Museum. In other words, these organizations feel that to date, APE has not been as forthcoming and transparent as they would like.

At the top of the coalition's agenda is a prompt and thorough walk-through of the theater with community members and historic preservation groups to document the current conditions, including a thorough cataloging of culturally significant ephemera inside. That seems to us a reasonable request and one that should take place as soon as possible. There have recently been two vandalism incidents at the theater that caused about $45,000 in damages, so it's imperative that a full accounting of the interior be completed.

Aguirre told us Wednesday that gay District 8 Supervisor Rafael Mandelman's office will facilitate a meeting between the cultural district and APE, hopefully in early May. After the print deadline, Perry told us that "just today" he has reached out to cultural district leadership to schedule a meeting.

The coalition also wants APE's support on an update to the landmark designation for the property — the theater is already designated a San Francisco landmark — to reflect updated standards and the Historic Preservation Commission's 2020 resolution, "Centering Preservation Planning on Racial and Social Equity."

Thirdly, the letter asks that APE immediately cease renovation or the removal of items until a memorandum of understanding has been signed with the cultural district to respect the interests of key stakeholders, including the GLBT Historical Society.

And finally, the group wants good faith meetings with APE on various issues related to enhancing pre-existing, accessible community programming and resources. Groups and individuals have mentioned this repeatedly since January. APE needs to commit to reasonable rental rates so that nonprofits like Frameline and the San Francisco Gay Men's Chorus can continue to hold events at the theater. The coalition wants APE to provide an annual screening of "The Life and Times of Harvey Milk" coinciding with Harvey Milk Day May 22. The coalition wants commitment from APE that the organ will be preserved and upgraded — organist David Hegarty is involved in helping APE to replace the Mighty Wurlitzer, which he owns, Perry has said. And it wants APE to offer support for a robust repertory film program when the theater is not otherwise engaged.

These all are reasonable requests and they are all issues that APE should have been aware of when it agreed to take over management of the theater. The Castro Theatre is a special jewel in San Francisco. Its success under this new business model will help the LGBTQ neighborhood recover from the COVID pandemic's economic fallout and bring people to the area.

Perry, a gay man, told us he "would never" work for a company trying to erase queer culture. We hope that APE will right its ship and immediately get to work meeting with Castro community leaders, specifically the cultural district. Last year, we urged the Castro cultural district to focus on things other than the long-debated rainbow flag, over which it has no control. We're pleased to see that the district is doing just that regarding the Castro Theatre. This is a project that cries out for involvement from stakeholders such as the cultural district, which is working hard to do that. We strongly urge APE leadership to meet — in-person if possible — with the cultural district manager and board leadership and schedule the walk-through of the theater. Those two requests, followed by the others, will go a long way toward forging a better working relationship, which is in the Castro neighborhood's best interest.

Editorial: The copycats are out in force

Editorial: It's students who'll suffer under Florida law
Sign up!