Editorial: The copycats are out in force 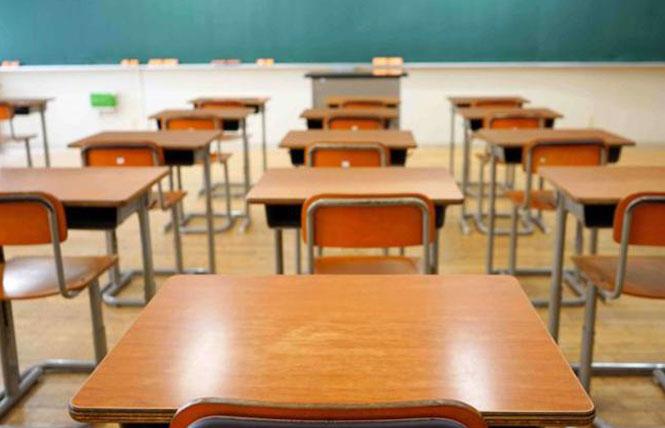 Now that Florida's "Don't Say Gay" bill has become law, legislators in other states, not surprisingly, are working on similar proposals. Schools have become the flashpoint across the country, leading up to November's midterm elections, and national Democrats are once again being put on the defensive in many statehouses. This is because they lack a coherent message or counterattack to all this garbage legislation. And instead of standing up for LGBTQs, a lot of Democratic officials are afraid to confront these outrageous bills and the blatant homophobia and transphobia behind them.

A recent article in the Wall Street Journal addressed New Jersey voters who were longtime Democrats but who voted Republican in 2020 state races. Many of those interviewed, including a lesbian, were tired of the COVID restrictions implemented by Governor Phil Murphy (D), but will likely vote Republican this year too even though things like mask mandates have been lifted. School issues figured prominently in their thinking, they said. That's also reflected in a number of school board races across the country where conservatives are running this year.

According to Education Week, at least 15 states are considering bills that would affect ways of discussing, addressing, or interacting with LGBTQ youth in schools. () Reporter Stephen Sawchuk provides an in-depth analysis of these nearly 30 pieces of legislation. They "variously take aim at school clubs for LGBTQ students, would put limitations on teachers' and students' use of gender pronouns, and would restrict or proscribe curriculum, instruction, and library books that feature LGBTQ themes," Sawchuk writes. The troubling aspect of this is that most of the proposed legislation goes well beyond Florida's new law, which only affects certain topics for students in kindergarten through third grade, though to be clear, that is bad enough.

These proposals go to the heart of the right-wing's latest tactic — using words like "grooming" and "pedophile" to describe supporters of inclusive curricula that includes LGBTQ topics. This reprises the old trope of gays and lesbians "recruiting" youth that was devastating to so many people decades ago. Some were outed and others were fired from their jobs. It was this atmosphere that led to California's Proposition 6 ballot initiative in 1978 that would have banned gays and lesbians from teaching in public schools. (It failed, by the way.) It is also similar to the right-wing's incorrect citation of critical race theory in seeking to get rid of history curricula that seeks to address chattel slavery in this country, reconstruction, and the civil rights movement, for example. Any way you look at it, conservatives are forcing a return to 1950s-era classrooms where little was taught about history except for colonialism and narratives extolling a straight white male dominated society.

These proposed education-related bills are damaging to queer youth even if they don't end up becoming law. That's because just the mere talk of these issues — and proposed bans on discussions of gender identity (South Carolina) or requiring schools to get parental consent for students to choose pronouns (Wisconsin and Rhode Island) — is taking place on social media all around them. And those comments are mostly vile. These proposals are "taking a page out of the authoritarian agenda," as Shannon Minter, a trans man and legal director at the National Center for Lesbian Rights, told us recently. He invoked Russian President Vladimir Putin's anti-LGBTQ propaganda law that was signed in 2013. Now, nine years later, LGBTQ people are being cast as social pariahs in this country because the Republican Party has been overtaken by extremists — driven by MAGA-inspired adherents of former President Donald Trump.

It won't be easy to stop this maelstrom, but Minter is correct that we cannot rely solely on the courts, as the LGBTQ community has done in the past. For one thing, the U.S. Supreme Court now has a solid 6-3 conservative majority, and Trump's three appointees will likely be on it for decades. What the community needs to start doing is building relationships with straight allies, not only in states with these hideous education bills but everywhere, he said. We've seen through battles over anti-trans legislation in Texas and Alabama that supportive parents of trans kids can be incredible allies and many of them are beginning to speak out. LGBTQ organizations need to do more outreach to moderate Republicans — yes, we know a lot of us think it's a dirty word — because they're the ones, especially in red states, that may be able to slow down or halt this latest anti-LGBTQ backlash. If not confronted, this backlash could expand; some strident GOPers even want to revisit marriage equality, which was decided by the Supreme Court in 2015 (2013 in California). That's ridiculous, but unfortunately, not out of the realm of possibility in today's charged political discourse.

National Democrats need to get a backbone — we've said that before — and provide resources in state congressional races where there are viable Democratic candidates. We have one right here in California, as this week's Political Notebook reports. Derek Marshall is a gay man running in a High Desert seat in Southern California but national Democratic leaders apparently don't see the race as a toss-up. It could be, and they would be wise to take another look at it.

In the meantime, support LGBTQ youth any way you can, including speaking out against the copycat legislation that is sweeping the country.