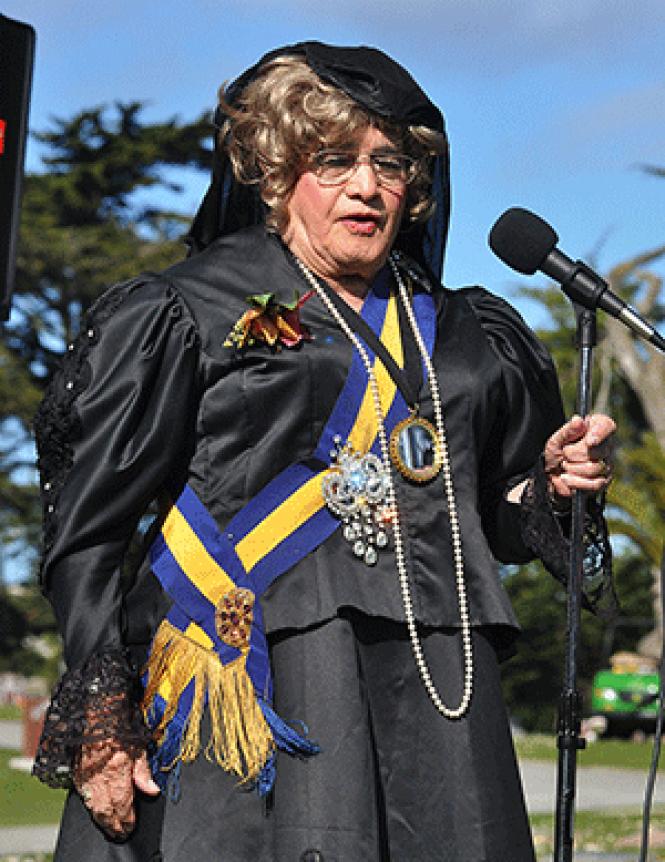 Jose Julio Sarria should be inducted into the California Hall of Fame and we all must organize now to make it happen.

It would be a fitting tribute for Sarria, a gay man and drag queen who died in 2013 at the age of 90. He made history in 1961 as the first out gay person to seek elective office in the U.S. His bid for a seat on the San Francisco Board of Supervisors was unsuccessful but his public declaration to fight for gay rights paved the way for many LGBT candidates who followed to seek and win elective office, not only in the Golden State, but across the country.

Sarria was also a pioneer in San Francisco's nascent but growing gay community in the 1950s. He created what became known as the Imperial Court System and crowned himself "Her Royal Majesty, Empress of San Francisco, Jose I, The Widow Norton." The title was in homage to Joshua Norton, an eccentric city resident who in 1859 declared himself Emperor of the United States and Protector of Mexico. But more than just a social club for drag queens, the Imperial Court has raised millions of dollars for charity and helped educate the public about drag culture and LGBT rights. The San Francisco Imperial Council celebrated its 50th anniversary this year and was the first of numerous Imperial courts around the country and the world.

Significantly, Sarria was an inspiration to many LGBTs when it wasn't common for us to be out, much less stand up for ourselves, because we risked losing our jobs, families, and housing and, at worst, faced incarceration. Sarria gave the gay community a voice, and was a source of strength that gave gay people the courage to organize and fight back against anti-gay police discrimination. As lesbian Assembly Speaker Toni Atkins (D-San Diego), who's serving as the honorary campaign chair for the effort to induct Sarria, told us, he "helped end raids of establishments that catered to LGBT people and helped move our community toward equal treatment under the law."

A portion of a Castro neighborhood street is named after him â€" Jose Sarria Court â€" and being included in the California Hall of Fame would be a fitting tribute to his legacy.

The California Hall of Fame was created in 2006 by then-Governor Arnold Schwarzenegger and his former wife, Maria Shriver. It honors residents of the state who have made lasting contributions to society. Honorees receive the Spirit of California medal, and their accomplishments become part of the permanent record in the California State Archives. Only four of the 93 individuals in the hall are from the lesbian and gay community. While they are all deserving members, we think the Hall of Fame could be more diverse. Among the honorees are the late Harvey Milk, inducted in 2009, and tennis great Billie Jean King, inducted in 2006. Hall of Fame bios of the other two inductees do not explicitly acknowledge their sexuality. The first class of inductees in 2006 included astronaut Sally Ride, who was identified as a lesbian only after her death in 2012, and author Alice Walker, one of whose former lovers was singer Tracy Chapman.

To be considered for the Hall of Fame, nominees are first vetted by the California Museum's board of trustees, which then sends a list of qualified candidates to Governor Jerry Brown, and his wife, Anne Gust Brown, who both ultimately make the decision.

Anyone can nominate candidates for consideration, and this is where Sarria's friends and admirers can have an impact. More nominations increase the chances for the museum's board to take note and move the candidate forward.

A statewide campaign to induct Sarria started earlier this year, and now is the time to get behind this effort because nominees will be considered this summer.

San Diego resident Nicole Murray Ramirez, a former Imperial Court empress who currently holds the title Queen Mother I of the Americas, Canada, United States, and Mexico, is one of the leaders of the Sarria campaign.

To nominate Sarria, people can use the online form found at http://www.californiamuseum.org/nomination-form.

Coco LaChine, director of the campaign, requests that anyone who nominates Sarria email her at cocolachine7@gmail.com so she can compile the information.

We can't think of a better Pride gift than to take a few minutes to go online and nominate Sarria. He's made a lasting contribution to the Bay Area â€" and California â€" and deserves this honor. Our lives are better today because of him.