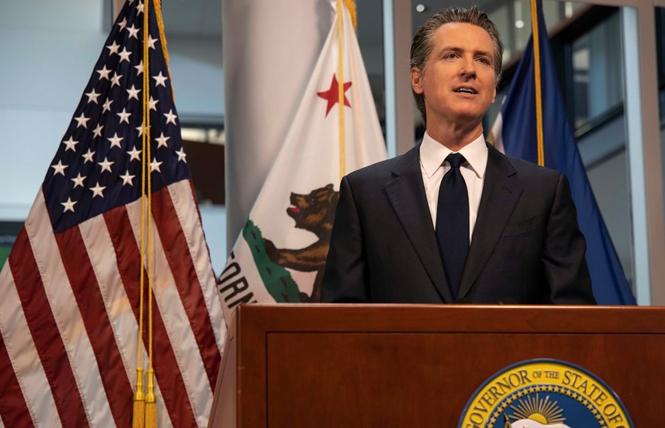 Governor Gavin Newsom should be retained as the state's leader in the recall vote. Photo: Courtesy Governor's office

Beginning August 16, California voters will receive their mail-in ballots for the September 14 recall election of Governor Gavin Newsom. It's unfortunate that state law makes qualifying a recall relatively easy, but voters should not be fooled into thinking that any of the 46 candidates running to replace Newsom would improve matters in the Golden State. Quite the opposite, in fact. The leading Republican, conservative talk radio host Larry Elder, doesn't believe in the minimum wage and is an anti-vax conspiracy spreader who urged his fans to listen to a COVID-19 vaccine skeptic, according to HuffPost. Another candidate, businessman John Cox, already had his shot against Newsom, losing to him by 23 points in 2018. Kevin Faulconer, the former San Diego mayor, voted for former President Donald Trump but has drawn the ire of Donald Trump Jr. for not being loyal enough. And where to start with Caitlyn Jenner, a trans woman and former Olympian who returned from a TV shoot in Australia this week — just in time to launch a bus tour of the Golden State? She's polling at about 3% and admitted to getting her info on the state's homeless crisis from a neighbor who shares an airport hangar.

The recall ballot has two questions: Should Newsom be recalled (removed) from office and who should replace him. Newsom and his campaign advisers took a risk and persuaded other big-name Democrats not to run as recall candidates. That might backfire, but hopefully will not. In 2003, when then-governor Gray Davis (D) was recalled, then-lieutenant governor Cruz Bustamante (D) was a replacement candidate. He did poorly, obviously, as movie star Arnold Schwarzenegger (R) cruised to victory. But Democrats were in an awkward position, telling people to vote no on the recall but vote for Bustamante "just in case." This time, there is no Plan B. Newsom needs a simple majority of the vote to remain in office. If he goes down, we will be left with a Republican governor who could win with a tiny percentage of the vote. (It's not a 50%-plus 1 situation, whoever gets the most votes wins — if the first question to recall Newsom passes.)

Nevertheless, we recommend voting no on whether Newsom should be recalled and not voting on the second question. In our opinion, none of those candidates are qualified to run the world's fifth largest economy. The major Republicans in the race would severely roll back the state's progress against the COVID-19 pandemic and do not align with our values on handling other major issues like climate change, wildfires, and homelessness. Significantly for our readers, any winning recall candidate likely would curtail our progress on LGBTQ rights; as our Guest Opinion authors note below, Newsom has signed important legislation regarding trans prisoner rights, LGBTQ older adults, and HIV-positive people. There are several LGBTQ bills still pending in the Legislature that would probably be vetoed by any of the Republicans running. So we're gambling too, but we're optimistic that in the end, Democrats will turn out to vote and retain Newsom. He's up for reelection in 2022, and that's the opportunity for Republicans and other candidates to make their case for denying Newsom a second term.

What we need to discuss is Democratic apathy over the recall because that's what will lead to Newsom's defeat. For months, many doubted the recall would qualify. When it did several months ago, Newsom's poll numbers were high enough to give him a comfortable margin for victory. The state reopened from its COVID lockdowns in mid-June, and for a few weeks things were OK. Then, the Delta variant took hold amid protestations by anti-vaxxers and we've seen COVID cases surge, especially among the unvaccinated. We think that Newsom has done a good job in confronting the pandemic over the last 17 months, aside from his unforced error of traveling to the French Laundry for dinner with people outside his household while he was telling all of us not to do that. In fact, that misstep probably galvanized recall proponents more than anything else, and we may all have to live with Newsom's folly — but not if enough Democrats return their mail-in ballots. Among likely voters in the state, 46.3% are Democratic, 26% are Republican, and 22% are independents. Surveys have shown that Democratic voters are not motivated by the recall election, yet we need them to vote in large numbers. Voting is a right that we mustn't take for granted. This recall vote occurs in a month when people aren't used to voting. Historically, a large proportion of LGBTQ people have cast their ballots in every election, owing to the high stakes involved. This recall is definitely one of those times. We need to take candidates like Elder seriously — he leapfrogged over all the others in recent polling — and send him a message that his outdated views on women, science, and education are not what California needs.

Newsom is not perfect, but right now, he's the governor we have. And he should keep his job so that the state can continue its pandemic recovery. Return your mail-in ballot by September 14 and encourage everyone you know to do so, and vote no on question 1 about whether Newsom should be removed from office.