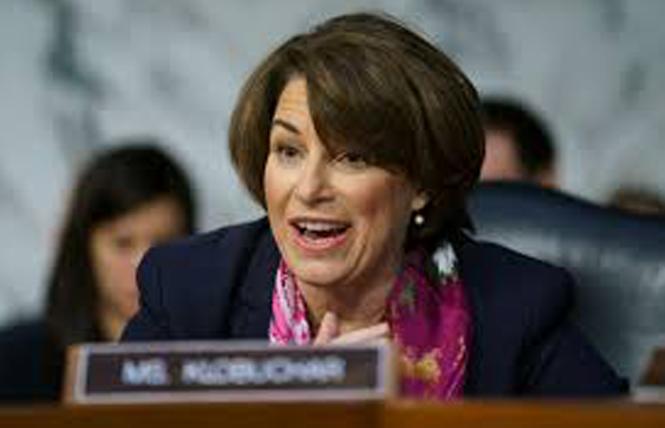 Senator Amy Klobuchar (D-Minnesota) led the charge in an August 2 letter signed by 12 Democratic Senate colleagues to Secretary of State Antony Blinken questioning what was being done to protect LGBTQI+ refugees and asylum seekers.

The letter comes after more than a year of reports about violent protests against assaults and deadly attacks on LGBTQ refugees in Kenya's Kakuma Refugee Camp; rapes, murders, overcrowding at LGBTQ shelters; and an electrical fire at one of the shelters that displaced 152 queer migrants at the United States-Mexico border.

"The United States has been a beacon of hope for many LGBTQ migrants escaping persecution, including domestic violence, rape, and murder, as well as discrimination in areas like education, employment, housing, and health care," the letter, publicly released August 6, stated.

The senators commended the State Department's "swift action" to implement Biden's presidential memorandum to protect LGBTQ people around the world, but they wanted more details of how it was being carried out, especially regarding LGBTQ asylum seekers.

The senators specifically asked: What are the department's plans for restoring former commitments to LGBTQ refugees and asylum seekers and expediting resettlement for the most at-risk LGBTQ refugees globally? The letter also asked what progress has been made in the department's global strategy to address discrimination against the LGBTQ community and to integrate LGBTQ concerns into U.S. foreign policy.

An estimated 11,400 total applications for asylum were filed in the U.S. on the basis of LGBTQ status from 2012 to 2017, the senators stated, citing a study by the Williams Institute, an LGBTQ think tank at UCLA School of Law.

Transgender people are criminalized in 13 countries and 47 United Nation member states do not allow for legal name and gender marker changes, reported the Trans Legal Mapping Report published by the International Lesbian, Gay, Bisexual, Trans and Intersex Association World in 2020.

Jaime Marín, who runs Jardín de las Mariposas shelter with his mother, Yolanda Rocha, said it surpassed its 40-person capacity, sheltering 47 people last month. They've accommodated the overflow by putting up tents in the shelter's backyard. Their LGBTQ shelter isn't the only one experiencing a capacity problem, all of the LGBTQ shelters are out of space, Marín told the Blade.

An electrical fire that destroyed lesbian-run Mexicali migrant shelter Centro Comunitario de Bienestar Social last month did not help the situation. An estimated 152 migrants from Guatemala, El Salvador, Honduras, and other countries living at the shelter were displaced.

The Organization for Refuge, Asylum and Migration spearheaded a fundraising campaign to help the LGBTQ migrants. The organization raised $2,600 for clothes, food, and other necessities.

"We're overpopulated with a lot of residents," Marín told the Blade. "We are overwhelmed as well."

The Biden effect
Since Biden came into office the flow of migrants heading toward the U.S.-Mexico border has increased dramatically, despite stern messages from Biden telling migrants not to come and officials in his administration echoing his message, including Vice President Kamala Harris.

However, Harris and other administration officials acknowledged publicly in April that violence against the LGBTQ community in El Salvador, Guatemala, and Honduras is one of the "root causes" for the migration.

In June, Biden ended former President Donald Trump's Migrant Protection Protocols program that forced thousands of migrants to file their claims in Mexico. The administration has also done away with many other Trump administration asylum and immigration policies that made it challenging for migrants to qualify for asylum, however, some policies remain in place.

The border is still closed to most asylum seekers and migrants due to the global COVID-19 pandemic, under the federal Centers for Disease Control and Prevention rule, Title 42.

"The policy is blocking many LGBTQ individuals from refuge and leaving them vulnerable to physical and sexual violence, bias-motivated abuse, food and housing insecurity, and other forms of violence," Emem Maurus, an attorney with the Oakland-based Transgender Law Center, and Julia Neusner, a legal fellow at Human Rights First, wrote in a July 21 joint news release for Human Rights Watch calling for an end to Title 42.

Biden's lifting of the protocols, as well as his agreement in a federal court case to allow up to 7,750 asylum-seekers stranded in Mexico to enter the U.S. each month, has helped ease the process recently. Eligible asylum seekers were exempt from the Title 42 policy.

Teaming up with the Asylum Seekers Support Project, the organizations' representatives will discuss what sponsors do for LGBTQ asylum seekers, from offering a safe temporary home to creating circles of support for asylum seekers.

The virtual event is Thursday, August 12, at 1 p.m. Pacific Time.

A Moscow-based psychologist identified only as Yuma and her adult daughters Mila and Alina, along with Alina's fiancée, Ksyusha, and Alina's 8-year-old daughter quickly packed their bags and flew to Barcelona, Spain as soon as she discovered their address was leaked to anti-LGBTQ groups.

"Our address and all contact information were leaked to extremist organizations. They threatened us with physical violence," Yuma told Radio Free Europe/Radio Liberty. "We packed our bags very quickly, and we left for a safe place the day we found out that [the family's personal data] had been leaked."

Yuma, who is the head of the family, also could not ignore the messages directed at her granddaughter. They scared her. "I was just knocked back by comments to my granddaughter, where some people wrote that they want to rape her, to kill her, to stab a child who is just sitting and smiling in the photograph," she told journalist and YouTuber Karen Shainyan in the interview, reported Reuters.

Shainyan recorded the family's departure as a part of the interview that aired after they were safely out of Russia.

The LGBTQ activist isn't a stranger to being attacked because she is an out lesbian in Russia. She had been doused with chemicals by masked people and targeted by crowds threatening to stab her and set her on fire, she told RFE/RL.

She also counseled LGBTQ people facing persecution in Chechnya. She and her daughter, Mila, who is also a lesbian, volunteered for Russia's only LGBTQ film festival, Side By Side.

"During my activism, I have seen too many broken, terribly lonely, beaten, hunted people," Yuma told RFE/RL. "It's awful; it doesn't have to be this way."

At the beginning of the summer, Yuma and her family were proud to appear in VkusVill's advertising campaign, "Recipe for Happiness," spotlighting real-life customers of the Russian health-food franchise, which has more than 900 stores in the country.

Soon after the ad started airing, the positive responses the company and family received were quickly overtaken by the anti-LGBTQ threats that came through phone calls and social media.

The ad originally aired with an 18+ disclaimer complying with Russia's 2013 anti-homosexuality propaganda law.

VkusVill also received threats from unknown people. The store pulled the ad from all advertising channels and issued an apology in July. The ad was replaced by one featuring a conservative heterosexual family.

Now in Spain, Yuma told RFE/RL that her family is happy. Her family's pictures on Instagram show them dancing in a park wearing lesbian-centric T-shirts and waving a rainbow flag.

She does not know what they will do next as they begin to start their lives over, but they have no plans to return to Russia anytime soon, Yuma said.

Out in the World: Advocates work to evacuate nearly 1,000 LGBTQ Afghans
Sign up!