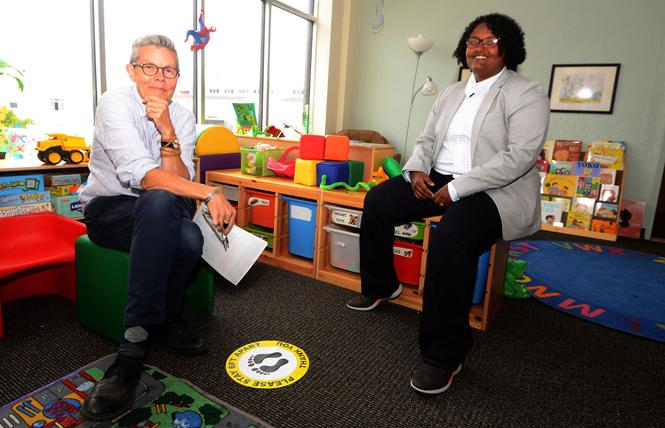 As LGBTQ families welcome the start of a new school year and wrap up summer vacations, a San Francisco-based nonprofit focused on their needs is preparing for the new fall season. It recently brought back one of its former program directors to help oversee its offerings.

Among them are Our Family Coalition's playgroups for queer parents of newborns and toddlers held now in a new dedicated room it opened to the public earlier this year. The agency last December relocated its offices into a smaller space on the same floor of the Mission Street building near 10th Street it has called home for some time.

The nonprofit worked out a deal with its landlord to go from its former 3,500 square foot space to its current 2,000 square feet of offices down the hall. It continues to have large window views onto Mission Street.

The downsizing not only reduced the agency's monthly lease payments but also allowed it to set up its Childcare Annex in its own separate room. Before the move the play space for small children and their parents had been set up in the middle of the old office space surrounded by cubicles and rooms for the nonprofit's staff.

"I don't think enough people know it is available," said Mimi Demissew, OFC's executive director, as she showed off the new offices and play space to the Bay Area Reporter in late July.

The play space is packed with toys and children's books as well as comfortable adult-sized seating. Free for parents to use largely on a drop-in basis four days a week in the mornings and early afternoons, donations are also accepted. Those who do stop by will have their temperature checked and be required to wear a mask due to the ongoing COVID-19 pandemic.

"You may need to have a break," explained Demissew as for why the agency makes the space available to parents of young children. "You can come here and play with your baby, talk to the staff, go to the other room for coffee or tea if you need a little break."

Having a 3-year-old son with her wife, Demissew noted, "When you are a parent, you don't have a moment to yourself."

There are also dedicated sessions for parents with toddlers from the ages of 2 to 5 and those with babies up to 2 years of age. A new schedule for them is being worked out and will be rolled out in September.

Program director returns
And with the agency bringing back as its program director Shareena Clark Ascher, who had overseen its programs from spring 2014 to spring 2017, it plans to once again staff the play space so parents can pop out of the room if they need to for a short interval.

"I am delighted to rejoin OFC as a queer parent and I look forward to reconnecting with old heads, and building relationships with the folks I will meet in the near future," stated Ascher in an email announcing their hiring. "Thanks for welcoming me back, I missed ya'll."

For Krystal Dawn Peak, also recently hired as OFC's communications and outreach specialist, the play space is a nice perk of the job. She and her wife have a nearly 8-month-old son, Mack, who can now accompany Peak to the office on the days she is there.

"I wasn't sure I would find a job that had the family flexibility I was hoping for," said Peak, who had put her career in public relations on hold in order to have her son. "This was a big opportunity to get back into the work space after having taken time off to have a baby."

The agency's staff of eight is working on a hybrid model, spending some days at home and the others in the office. Their schedules are bifurcated as they now have shared desks.

With the COVID pandemic leading to a drop off in its grant funding and donations last year, OFC needed to decrease its operating costs by 30%, explained Demissew. Its budget this year is set at $900,000, down from nearly $1.3 million in previous years.

"There were no staff reductions and no cut in benefits," said Demissew, who will mark her first anniversary leading the agency in October. "That was really important to me."

Needs assessment underway
Throughout the last 20 months OFC has continued to work with area school districts in training teachers and classroom staff on how to teach LGBTQ curriculums as required by state law. It also never stopped advocating for same-sex parents or single LGBTQ parents who didn't see school staff respecting their households or being a family led by two parents of the same sex.

One example Demissew gave was a teacher who only refers to children having a mother and a father when they have students in their class whose families do not mirror such a familial structure. They should be using classroom materials that showcase a variety of family makeups, she said.

"It is important teachers don't reinforce stereotypes or erase our visibility or erase our existence," she said.

Like many of the families it works with, OFC employees with school age children are also looking forward to seeing them return to the classroom this school year, which for many districts begins in mid-August. Communications director Pauly Pagenhart will be seeing off their teenage children, a senior and a freshman, to their Berkeley high school this fall.

"Like a lot of parents, we had to make concessions during the pandemic," said Pagenhart, who is genderqueer. "And our children suffered under the lack of social experience."

Pagenhart said they and their partner relented on the rules regarding the amount of social media usage they had established for their 16-year-old daughter and 14-year-old son. Under lockdown there was no other way for them to interact with their friends.

"Young people hunger for real life interaction," said Pagenhart, adding that a main worry they have with the new school year is if their children and fellow classmates are where they should be academically, having spent much of the last two school years learning remotely from home. "My greatest concern for my kids and any single kid is how they and their teachers will manage to bridge the gap in learning."

For LGBTQ students, not being on their school campuses presented unique issues for them, noted Rick Oculto, OFC's education director, especially if they are not out to their parents or family about their gender identity or sexual orientation. Because of liability issues, some teachers that Oculto works with told him their school districts wouldn't allow them to hold video-conferencing sessions with members of the Gay Straight Alliances they oversee.

"If the classroom was a safe space to be yourself, that is gone," said Oculto. "How are students finding respite in the time of COVID if you can't even talk to your friend or supportive teacher about what is going on?"

Last October, OFC launched its own needs assessment survey to get a better picture of the issues LGBTQ families in the Bay Area continue to confront. With more white and upper income parents taking part, OFC in recent months has taken steps to reach more LGBTQ families of color and those of lesser means to ensure it is capturing their unique needs.

"We are still figuring out how to reach more low-income and middle-income families for their input," said Oculto, who has partnered with Kali-Ahset Amen, Ph.D., a sociologist at Johns Hopkins University in Baltimore, on the survey. "She is helping out with creating the design of how we can do this."

The information it gleans from the survey will guide OFC as it finalizes a new three-year strategic plan and reviews the types of programs and services it is offering. It will also provide it some guidance on the policy matters it needs to advocate for at the local, state and federal levels on behalf of the families it serves.

"We are trying to figure out how many families could we be serving that are low income and could we provide services such as financial aid and housing help," said Oculto. "All these things might be helped by other social service agencies but they may not have a particular focus on LGBTQ families."

Also in the works is a nationally focused survey to understand what issues are LGBTQ families facing from coast to coast. It will inform the kind of advocacy work at the federal level OFC should be engaged in, explained Oculto.

"As we advocate on a policy level, as much as we are based in the Bay Area, those things happen at the federal level and impact us in lots of different ways," he said. "We want to ensure we are addressing the needs of families across the country."

OFC's offices at 1385 Mission Street are open to the public Mondays through Thursdays from 9 a.m. to 2:30 p.m. For more information about the agency and its programming, visit its website.