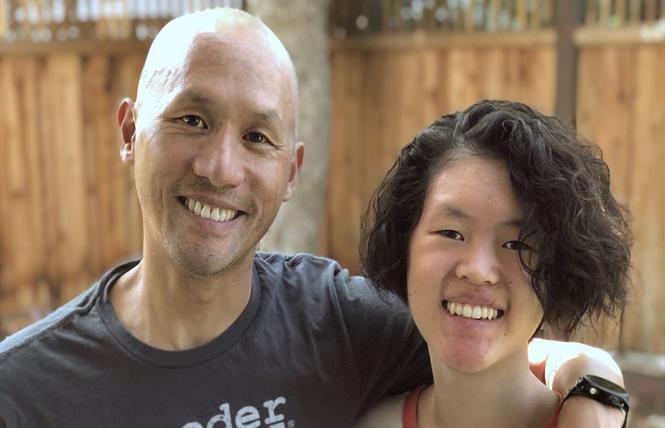 A Peninsula father of a nonbinary child is using his business as a springboard to raise funds for a California-based agency that provides crisis intervention for LGBTQ youth.

Hansel Lynn, 51, is founder and CEO of theCoderSchool. Founded in 2014 and franchising since 2016, theCoderSchool provides computer programming lessons to children ages 7-18. During Pride Month in June, theCoderSchool donated $100 to the Trevor Project for each Pride-themed app submitted to its app gallery. In an interview with the Bay Area Reporter that took place after Pride, Lynn said that he would continue to accept Pride-themed apps and make the donations to the Los Angeles-based Trevor Project.

So far, approximately $200 has been donated, he said.

Lynn spoke about what nonbinary means and about his child, Maile.

"It can mean a number of things," he said. "It's a fluid identity between male and female, sort of how you identify yourself. So it's sort of neither male nor female and somewhere in between."

Lynn further explained that most nonbinary people eschew gender-specific pronouns and use gender-neutral pronouns. He recalled that it was around three years ago that Maile came out to him as nonbinary.

But Lynn, who is supportive of Maile, set about to educate himself. Most of the information, he said, came from Maile, though he also searched online. As far as Lynn knows, Maile hasn't been subjected to any bullying as a result of their identity. He points out that Palo Alto, where they live, is generally very progressive and that most people are open and accepting.

"I believe there are a few other nonbinary people in their class," he said.

According to a study the Trevor Project released in July, about one in four LGBTQ American youth identify as nonbinary. Another 20% of the 34,759 LGBTQ youth between the ages of 13 to 24 from across the U.S. who participated in the online survey last fall reported that they are not sure or are questioning if they are nonbinary.

Maile, 17, talked about when they came to realize their identity.

"I guess in middle school, that's like puberty, and you're just trying to figure yourself out in general, and I came across the term on the internet, and I guess I thought it kind of fit me," Maile told the B.A.R.

At first Maile came out to a friend in middle school. They recalled getting a positive response, not only from that first friend, but from everyone they came out to subsequently. They came out to their parents at around age 14. Maile confirmed that their parents were confused at first, not understanding what the term nonbinary meant.

"I was probably a little nervous at the time, so I didn't explain it as well as I could have," they said. "I was still trying to figure it out myself."

Teaching kids to code
Lynn said that theCoderSchool teaches kids how to code, or talk to computers.

"So anything out there today that runs on a chip or runs on software, or runs on computers, which is almost everything, there was a coder that built these instruction sets to tell that computer what to do," he said. "We've always thought that everything is becoming more technical these days, more coders are needed, so we've always believed that the future just needs to have more kids who understand the language, understand how to do it, because they are our future."

The school has done well, as there are now 50 locations around the country, Lynn said.

During the COVID-19 pandemic, the school switched to online remote learning, but since the vaccine has become available they've returned to 30% in-person learning. The majority of students continue to work remotely, however, due to concerns regarding the highly-contagious Delta variant.

Lynn's involvement with the Trevor Project came about at the suggestion of Maile. It was Pride Month around two years ago, and Lynn asked Maile who he could donate to. In 2021, the school received only two Pride-themed apps, which disappointed him. He noted that they had done much better two years ago, when they received around 20 submissions. One of the apps submitted this year was created by Maile. Lynn describes it as a trivia app about the LGBTQ world.

Lynn has a simple message to any parent who might be having difficulty in dealing with a child's coming out.

Maile said that they themselves have never needed to contact the Trevor Project, but they have told friends about it. They added that LGBTQ friends of theirs have also come out to them, and that they try to help them out in dealing with their identities.

"I just told them to be honest and I talk to them, and try to be understanding of their parents' perspectives, but also making sure that they're safe, because safety is number one very important," they said.

Maile spoke of what they want people to know about nonbinary individuals.

"It's a very person-to-person experience," they said. "One person's identity and how they see themselves can be completely different from other people's. You definitely need to talk to people one-on-one to see what their pronouns are, what their gender is, you can't really generalize for nonbinary people."

A spokesman for the Trevor Project did not respond to a request for comment.