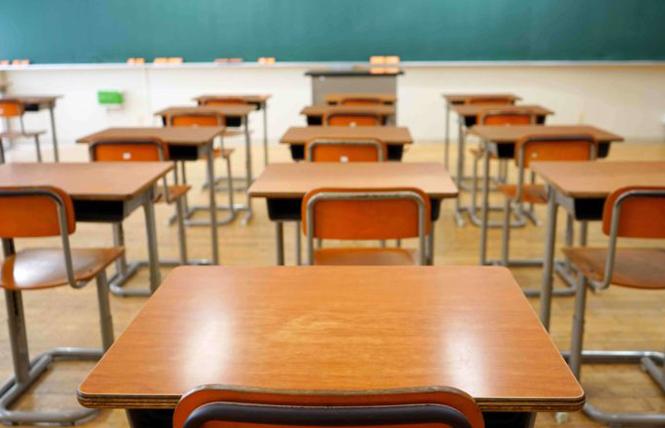 Equality California is hoping more public school districts respond to its second survey about LGBTQ school issues, due out in 2022. Photo: Courtesy TeachHub.com

A statewide LGBTQ advocacy organization is preparing an update to its groundbreaking report released two years ago that found a majority of California's public school districts were failing LGBTQ students. Its release is expected sometime in 2022.

Equality California's 2019 Safe and Supportive Schools Report Card disclosed that despite state laws aimed at protecting LGBTQ pupils and requiring LGBTQ history be taught, most schools had yet to implement the legislation. As the Bay Area Reporter noted at the time, the report also found that most school administrators weren't properly training educators and support staff on how to address bias and bullying based on a student's sexual orientation or gender identity.

The second iteration of the schools report, which EQCA intends to produce biennially, was to have been released this year. But with school districts disrupted over the last year and half by the COVID-19 pandemic, that timeline was pushed back.

When the B.A.R. spoke with EQCA executive director-designate Tony Hoang in April, he had hoped the surveys for the school districts would be sent out before the 2021-2022 school year, which begins in August for most districts. They should now be mailed out to school administrators in November.

"We are committed to doing a second round," Hoang had told the B.A.R. "We plan to retool the survey and plan to get it out to schools in the coming months."

Mimi Demissew, executive director of the San Francisco-based LGBTQ family nonprofit Our Family Coalition, said the LGBTQ schools report is an "important tool" for the agency and the parents of school-age children it serves.

"It is a really great report," said Demissew. "This information can really help our parents know that the school their children will be going to is going to be supporting them."

The agency's staff helped advise EQCA on its first schools report and took part in listening sessions it held earlier this year on how to update and revise the second one. Rick Oculto, OFC's education director, told the B.A.R. one result of having the information from the 2019 report was agencies like his could see what parts of the state they needed to focus more advocacy on around LGBTQ school issues.

"What it has done for our families is they are able to look at this table to say, 'I am a queer family in this region of California and this is what is happening in my school. I can see by the index it is lacking support for X, Y, and Z.' It gives them empirical data for their qualitative experience," said Oculto.

But one of the report's main weaknesses, he pointed out, was the responses were all self-reported by the school administrators. It raised questions, Oculto said, about the truthfulness of the answers.

"A school district might represent themselves way more favorable than that of the experience of their students," he noted.

Key to improving the response rate from districts to the schools survey will be how it is presented to school administrators, said Oculto. Rather than being seen as impugning school districts, LGBTQ education advocates contend the survey results should be viewed as a means for school administrators to seek additional resources to address the areas of the survey that lower their scores.

"One thing we talked about was how to do it in a way that encourages school districts that are less resourced to do this. Because if it is only going to paint a bad picture of them, they may not," said Oculto. "Part of it is the selling point. So if you are able to say to less resourced school districts this is an implicit mandate by the state Department of Education, I bet you there is money you can ask for to implement it."

One suggestion Oculto said he brought up with EQCA was fine-tuning the questions so there is more specificity. He pointed to the query on if school districts provided LGBTQ training for their teachers and staff needing to dive further into what kind of training is being offered.

"For example, is there a focus on social and emotional learning so folks at school are prepared to care for LGBTQ students, and also to deal with push back from communities that might not be as accepting around LGBTQ issues," said Oculto.

Asked in late July what new questions may be added to the surveys, EQCA spokeswoman Asha Wafer told the B.A.R. what changes will be made to them are still being discussed.

"We're in the process of finalizing the survey now. We can certainly share with you once it's complete and has been shared with districts," Wafer wrote in an emailed reply.

Under the current timeline, school districts would have until March of next year to return their completed surveys to EQCA. The agency intends to issue a full report based on the survey responses later in 2022, with an exact release date yet to be determined, Wafer told the B.A.R.

Hoping for better response rate
The response rate to EQCA's first schools report was woefully inadequate, even after the organization granted school administrators more time to turn them in. Of California's 343 unified school districts, less than half — 130 school districts — submitted the surveys.

Increasing that number will be one of EQCA's main priorities with the second survey. It will also be looking to see how school districts did in the three areas needing the most improvement pinpointed by EQCA when it released the inaugural LGBTQ school report.

One was seeing every school district in the state adopt policies requiring transgender students be referred to by their preferred name and pronoun. Another was for every school to be using LGBTQ-inclusive textbooks or teaching materials in the classroom.

Third was mandating LGBTQ-inclusive cultural competency trainings for all teachers and school staff. Following the publication of the initial school report, California lawmakers enacted a bill requiring such training in grades seven through 12.

But at the time of its passage in 2019, there was no funding for the training. Instead, Governor Gavin Newsom committed to allocate the money at a future date. With the state seeing a surplus in revenue this year, Newsom and state legislators included $3 million to create the training in the 2021-2022 fiscal year budget that began on July 1.

"I am thankful to the governor and the Legislature for prioritizing funding in the proposed budget for training and resources to support LGBTQ+ students," stated state Superintendent Tony Thurmond, a former state Assemblyman whose initial bill calling for the training was vetoed in 2018 by then-governor Jerry Brown. "Creating positive learning environments starts with us making our schools safe and inclusive for all students."

It is now up to the California Department of Education to develop an LGBTQ+ cultural competency training curriculum for public school teachers and staff. It is in the process of identifying an entity or entities that can create it, while it is unclear of the exact date for when the training will be finalized and made available to school districts.

Jonathan Mendick, a spokesman for the state agency, told the B.A.R. in an emailed reply last week that an online platform would be built using the budget allocation. It will house the recorded trainings, which will also require in-person sessions.

"We intend for these trainings to be hybrid — online and in-house — as the pandemic eases," wrote Mendick. "In addition to an online platform, an in-person training is a space to develop and nurture the much-needed soft skills that are important for moving forward the work of supporting LGBTQ+ students and their families."