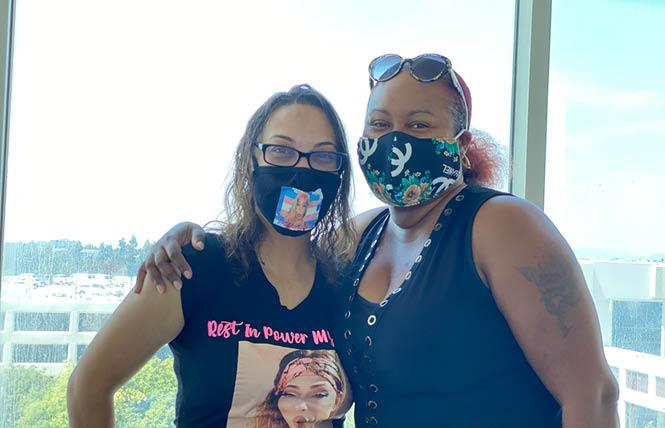 Vanessa Singh, left, the sister of Natalia Smüt Lopez, was at the July 28 court hearing in San Jose with her cousin, Aja Franco. Photo: John Ferrannini

For the second time in two months, a plea has been pushed back in the case of a Union City man charged with murdering a San Jose transgender woman with whom he'd been romantically involved.

Santa Clara County Deputy District Attorney Rebekah Wise had no objection and the continuance was approved. Segura was in court but did not speak.

As the Bay Area Reporter previously reported, prosecutors allege that Segura stabbed Natalia Smüt Lopez, 24, to death early April 23. The two had been dating for several months, according to a statement of facts from a detective. Segura was formally charged at San Jose's Hall of Justice April 29. He remains in custody.

As the B.A.R. reported last month, Lopez's sister, Vanessa Singh, has pledged to be at every court date. Singh was present July 28 along with her cousin, Aja Franco.

Singh said she has the same feelings as on June 15, when the case was continued until July 28.

"It's a setback," Singh said after speaking with Wise. "We have to wait a couple more months. If anything, I'll just try to keep up the fight for my sister."

Lopez's death sent shockwaves through the South Bay LGBTQ community, which mourned the drag performer as it unveiled a mural featuring Lopez's likeness in downtown San Jose April 30, as the B.A.R. reported.

Prosecutors and the defense agreed to the continuance because Segura's attorney, Peter Johnson, said he needed more time for discovery. Johnson has not returned a request for comment.

"We are still in discovery in this case," Johnson said in court. "I am in the process of figuring out how to proceed."

Johnson asked that the "arraignment" be pushed to "August 5, 6, or 7," before Judge Panteha E. Saban corrected him that the matter was for a plea. Johnson corrected himself and asked for an October date.

Wise has not responded to a request for comment as of press time.