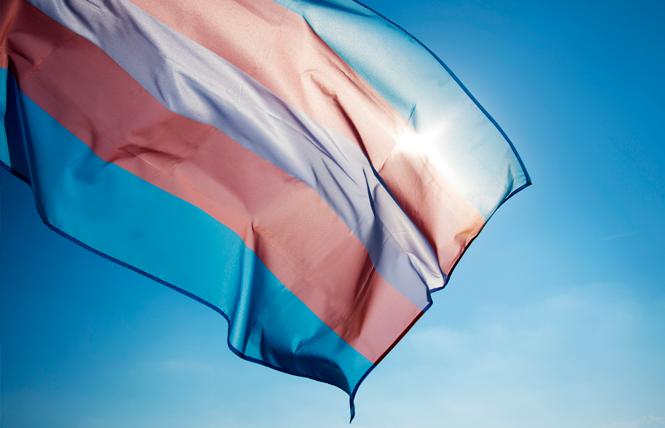 This week, Pew Research Center released a new survey that found a growing number of U.S. adults know a transgender person or someone who uses gender-neutral pronouns. This is hopeful news for the trans and nonbinary communities, as visibility has increased in recent years not only among high-profile trans and nonbinary celebrities who have come out (Elliot Page, Demi Lovato), but also neighbors, co-workers, friends, and family members who have as well.

Overall, as we reported online, Pew's survey showed that about 4 in 10 Americans (42%) say they personally know someone who identifies as transgender. That's up 5% since 2017. About a quarter (26%) say they know someone who prefers that others use gender-neutral pronouns when referring to them. That's up from 18% in 2018, the last time the question was asked.

While those who identify as Democratic/leans-Democratic are more likely to report knowing a trans person, even among Republicans/lean-Republican the percentage ticked up seven points. Not surprisingly, younger Americans (18-29) are far more likely to know a trans person (53%) and older people (62+) less so. The same is true for knowing someone who prefers gender-neutral pronouns. (The study was based on a survey of 10,606 adults between June 14-27. Participants were chosen "through national, random sampling of residential addresses" and were "weighted to be representative of the U.S. adult population by gender, race, ethnicity, partisan affiliation, education, and other categories," according to Pew.)

Unfortunately, the growing familiarity with transgender people does not seem to align with advances in the public policy arena — at least not yet. This year a record number of state-level bills across the country sought to limit definitions of gender to the sex people were assigned at birth. In June, California added Florida and four other states to its "no-fly" list, which prohibits state employees and athletic teams from using taxpayer money to travel to states that discriminate against LGBTQ people. That list now has 17 states on it.

Pew's new survey information should be a wake-up call to Republican lawmakers and governors, as they are the ones largely behind these hideous anti-LGBTQ laws, especially those banning trans girls from playing on girls' sports teams in school. It's somewhat reminiscent of polls conducted years ago regarding support for same-sex marriage and the initial backlash. Then, and as is the case now, younger people who are more liberal are more open to expanding definitions and, in time, will be the catalysts for a dramatic change in attitudes. Six years after same-sex marriage became legal nationwide, a Gallup poll in June found a record 70% support in the U.S. According to Gallup, that's a 10-point increase from 2015, when the U.S. Supreme Court legalized same-sex marriage in Obergefell v. Hodges.

Trans and nonbinary people struggle against unique, different challenges. For one thing, there's the endemic violence against trans women, particularly trans women of color. Transgender people face disproportionate discrimination in employment, housing, and medical access. And hatred is perpetuated by a subset of slanderers who seem to derive perverse glee in deliberately misgendering people, whether they be trans or nonbinary, or LGB.

Nonbinary people are increasingly public in our society — and their visibility helps educate others. For example, on July 27 NBC Sports issued a statement and apology for the on-air misgendering of Team USA skateboarder Alana Smith. Smith had even displayed "they/them" in grip tape on their skateboard, yet the commentators misgendered them, according to GLAAD, which highlighted the issue in a news release.

"NBC Sports is committed to — and understands the importance of — using correct pronouns for everyone across our platforms," the network stated. "While our commentators used the correct pronouns in our coverage, we streamed an international feed that was not produced by NBCUniversal which misgendered Olympian Alana Smith. We regret this error and apologize to Alana and our viewers."

That's a huge step forward for NBC, which has had its share of missed opportunities while covering out athletes at the Olympic Games over the years. At the 2010 Summer Olympics in Beijing, NBC declined to air a kiss between gay Australian gold medal diver Matthew Mitcham and his boyfriend after his dramatic victory in the platform dive. That changed in 2018, during the Winter Games in South Korea, when NBC aired a kiss between Olympian Gus Kenworthy and his boyfriend — it's all about treating all athletes equally, whether LGBTQ, straight, or nonbinary.

If there's one conclusion that everyone should take away from the Pew survey, it's that the increasing visibility among trans and nonbinary people can pave the way for public acceptance. As more people know trans and nonbinary people in their lives, the likelier they are to understand and empathize with their concerns, issues, and how they are treated. Eventually, growing affirmation and support of trans and binary people should spur passage of laws to protect them. That's if politicians decide to listen to their constituents, which is hardly predictable these days.

It will take a lot of work to change minds and attitudes, and members of the LGBTQ community are doing just that. Trans-led organizations must continue to speak out against the rampant violence impacting the community. All queer organizations need to center LGBTQ people of color. While Pew notes only a 5% increase in Americans knowing a trans person, by coming out and consistently confronting discrimination and stereotypes, in another four or five years that number should be higher.