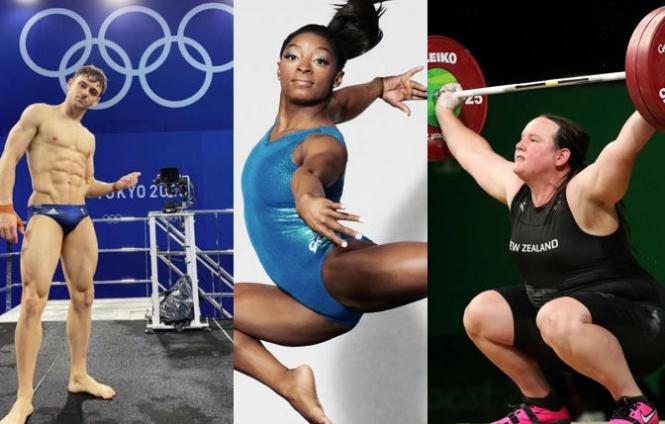 Let the games begin! Despite a state of COVID-19 emergency in Tokyo and with only a 21% vaccination rate in Japan, the Olympic games began on July 23 with Japan's tennis phenom Naomi Osaka lighting the Olympic flame.

Osaka will be competing at the games; her first competition since she withdrew from Wimbledon in June citing mental health challenges. Last week Osaka became the first Black female athlete to be the cover model for Sports Illustrated's swimsuit issue. 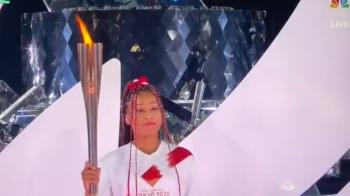 Osaka was also on the cover of Time magazine, as an Olympic athlete and the author of an essay "It's O.K. to Not Be O.K," about mental health, women and sports.

The pandemic has hit the Olympics hard. The Tokyo games were already postponed from 2020 due to the pandemic. And now, with a new surge, fans and even family of Olympic athletes are banned from the games amid COVID precautions. Local protesters have been outside the Olympic village every day, demanding that the games not be held.

But after a beautiful and serene opening ceremony July 23 attended by fewer than 1,000 people —mostly international dignitaries like First Lady Jill Biden— the games were officially underway.

What it will be like for athletes to perform without the support of family and the cheering of fans remains to be seen, but for once those of us watching from home will have the best —and safest— seats. 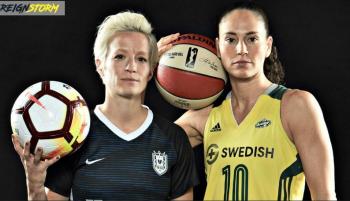 Good for gold
The good news is Team USA is bound for gold. Among the best performers at the Tokyo Olympics are gymnast Simone Biles, considered the greatest gymnast of all time; soccer star Megan Rapinoe; and basketball greats Sue Bird and Brittney Griner. These four women are already multiple gold winners and unquestionably will medal again.

There is perhaps no more exciting athlete to watch at these games than the 24 year old Biles. The gravity-defying Ohioan has a combined total of 30 Olympic and World Championship medals. Watching her perform is nothing short of magic. NBC's promos have her catapulting into space and it's not all that hyperbolic. [Update; Unfortunately, Simone Biles dropped out of gymnastic finals on July 27 (New York Times)].

Another exciting aspect of this year's Olympics is how many LGBTQ participants there are. The summer games always have more queer players because the volume of lesbians is higher: soccer and basketball, track and field all have a significant number of out queer women.

The 2016 games in Rio had the most out players ever: 56. But Tokyo has far surpassed that with 168, including the first openly trans and first openly non-binary athletes. Out queer women outnumber queer men at these Olympics 10-1.

There are 27 countries represented by at least one publicly out athlete in 30 sports, with Team USA dominating with more than 30 out athletes on teams and as alternates.

There are even a few Olympian couples, like Sue Bird and Megan Rapinoe. In 2018, Bird and Rapinoe became the first same-sex couple on the cover of ESPN's The Body Issue. Bird and Rapinoe got engaged in October 2020.

Rapinoe is famous for her activism and was the first white athlete to kneel during the national anthem. In June, Rapinoe became the spokesmodel for Victoria's Secret lingerie.

This will be WNBA star Bird's fifth Olympics. She is a four-time gold medalist and has a 49-game winning streak at the Olympics since 1992. Bird, along with teammates Brittney Griner, Diana Taurasi and Breanna Stewart, holds the Guinness World Records title for most consecutive gold medals in a team Olympic event (female).

Taurasi has been married since 2017 to her wife, and former Olympian, Penny Taylor. Stewart is engaged to Spanish pro basketballer Marta Xargay Casademont. 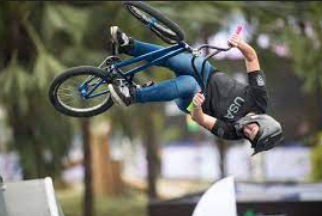 Among the other out queers in Tokyo is Hannah Roberts, 19, who will lead BMX freestyle, which debuts at these games. Roberts is the current world champion in the sport.

Another BMXer is Chelsea Wolfe, who is among the first out trans athletes to qualify for the games. She is an alternate for the BMX team.

Wolfe became a target for the GOP after she wrote in a March 25, 2020 Facebook post, "My goal is to win the Olympics so I can burn a US flag on the podium. This is what they focus on during a pandemic. Hurting trans children." 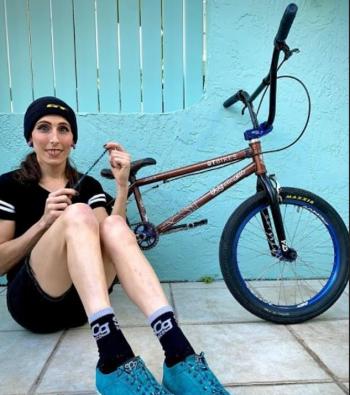 Wolfe was responding to the Trump administration's stance on trans girls in female athletics and had linked to a news story about that in her post. In June, Wolfe wrote on Intagram that she was able to "meet some amazing women who helped me accept that I am a woman just like any other and that I deserve a place to exist in the world just like everyone else."

Uplifting
New Zealand weightlifter Laurel Hubbard will be the first trans athlete to compete in the Olympics' 125-year history, even though the Olympics started allowing trans athletes in 2004.

Hubbard's inclusion has caused some controversy, with criticism that her participation is unfair to cisgender competitors. Several cisgender women have been banned from their events due to naturally occurring high testosterone levels (See the last Lavender Tube column). 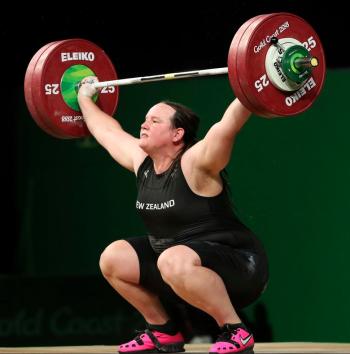 But there should be no controversy over Hubbard's inclusion as she meets the current criteria on testosterone levels after multiple testing. IOC President Thomas Bach said during a news conference in Tokyo that Hubbard is qualified to compete under the current rules, though he said those rules will be under review.

GLAAD was declarative in a tweet: "Policies including transgender athletes have been in place in the Olympics and Paralympics since 2004. Laurel Hubbard is the first to qualify among 54,000 Olympians and Paralympians over the last 17 years. Trans people belong in sports."

"It's not my role or my goal to change people's minds," Hubbard said. "I would hope they would support me, but it's not for me to make them do so."

Also participating as a trans athlete this games is Canadian soccer star Quinn, who has dropped their first name since coming out as trans in September 2020. They won bronze for Canada on the women's team in 2016 and will be playing with the women's team in Tokyo. 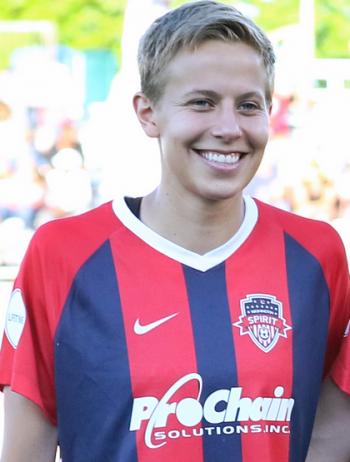 In a Twitter post on September 12, 2020, Quinn said that they were continually referenced as female in the media after coming out. "Nearly every publication, including LGBTQ news sources, has used my deadname while reporting my story. The news matters and it's crucial to write about trans people using their name & pronouns. Please do your research, change your headlines, and grow."

Respecting people for who they are could not be more basic. It's not political correctness. It's human decency.

While lesbians dominate the Tokyo games —and the medaling— there are also some out gay men participating. Among those is Julian Venonsky, 27, a crew/rowing coxswain (keep those puns to yourself!). Venonsky leads the U.S. men's eight team, which finished fourth at the 2016 Rio Olympics. 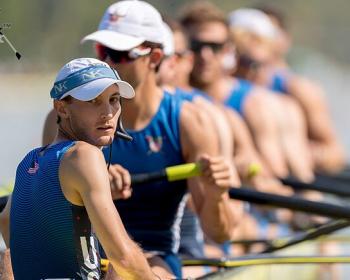 He was a steersman and rower at U.C. Berkeley. In a podcast about the Olympics, Venonsky said, "Halfway through my college career, my sophomore year, I started actually thinking about dating or what kind of my life I wanted to look like and I found my boyfriend on Tinder."

Venonsky explained, "That kind of was a little a-ha moment for me that kind of allowed me to really dive into rowing and coxswain even more and really go after it from 2014 on and that's kind of where I found a lot of my success." 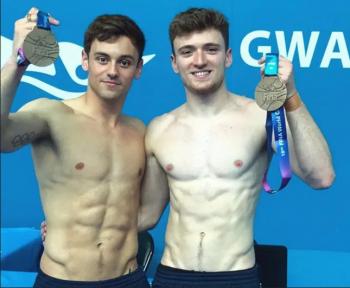 Daley said when he first came out in 2013 he had "always felt like the one that was alone and different and didn't fit in. There was something about me that was always never going to be as good as what society wanted me to be."

Daley added, "I hope that any young LGBT person out there can see that no matter how alone you feel right now, you are not alone. That you can achieve anything and that there is a whole lot of your chosen family out here, ready to support you."

Daley delivered his comments standing between medalists from China and Russia, both countries known for their anti-LGBTQ stances.

Daley married American director, producer and screenwriter Dustin Lance Black in 2017 and the couple had their first child via surrogacy in 2018. Black won the Oscar for Milk in 2008.

The Olympics run through August 8. (The Paralympics run from August 24 through September 5. We will preview those games in an upcoming column.) You can watch the Olympics on NBC, NBC Olympics and Peacock.

So for the best of the best, you really must stay tuned.

Jock Talk: Putting the 'flame' in the Olympic flame
Sign up!