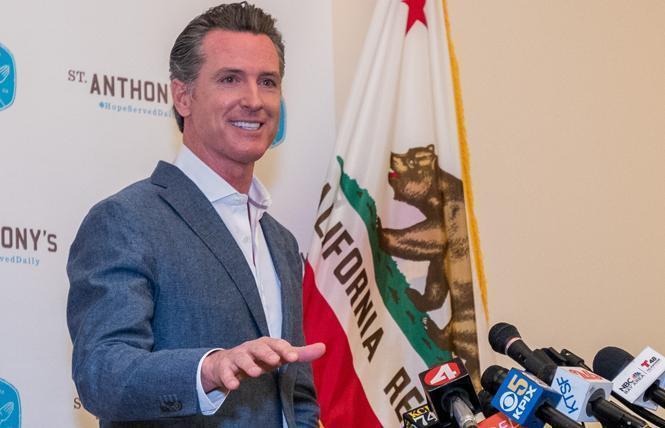 Two bills aimed at improving the lives of Californians living with HIV are now law. More male-centric references in the state's codes also will be updated to use more gender-inclusive language.

It is due to Governor Gavin Newsom signing three pieces of legislation on Friday (July 23). As is his customary practice, he did so without comment.

"Supporting Californians living with HIV today - no Californian should have disability or life insurance income denied simply because of their status," tweeted Gonzalez when the bill passed out of the Legislature in early July.

It also clarifies that limiting benefits payable for a loss caused or contributed to by HIV is allowed if it was part of the original underwriting risk. And the law also makes clear that the misdemeanor for willful, negligent, or malicious disclosure of HIV test results to a third party is now punishable by imprisonment for a period not to exceed 364 days.

"When I was Santa Cruz AIDS Agency Director, it was our dream to have people living with HIV age into the senior category," noted Laird when his bill was passed by the state Legislature earlier this month. "To be very clear, this group was not supposed to grow old. While the drug cocktail transformed the fight against HIV, and there are more HIV positive seniors than ever before, older people living with HIV face a number of behavioral health challenges in addition to physical illnesses."

Laird added that, "By easing the burden of connecting this vulnerable population to supportive aging services and programs, this bill provides another life line to assist this uniquely disadvantaged group."

The governor also signed into law Laird's SB 272, which will update "archaic gender-specific pronouns" used in the state's vehicle code to refer to the California Highway Patrol commissioner, now led by a woman, as well as throughout the state's insurance code. It parallels another bill Newsom signed into law in early July authored by Assemblywoman Rebecca Bauer-Kahan (D-Orinda), who signed on as a co-author to Laird's legislation.

Newsom has now signed into law five pieces of legislation addressing issues of importance to the LGBTQ community, whether it be health-related matters or addressing gender-based equality. Earlier this month he signed Bauer-Kahan's AB 439 to allow for deceased Californians who are nonbinary to be identified as such on their death certificates.

More LGBTQ-related bills pending
Seven more LGBTQ-related bills are still making their way through the approval process this legislative session. One of the bills would protect the privacy rights of people receiving sensitive health care services, such as gender-affirming care. AB 1184 is one of two trans rights bills Assemblyman David Chiu (D-San Francisco) is carrying this year.