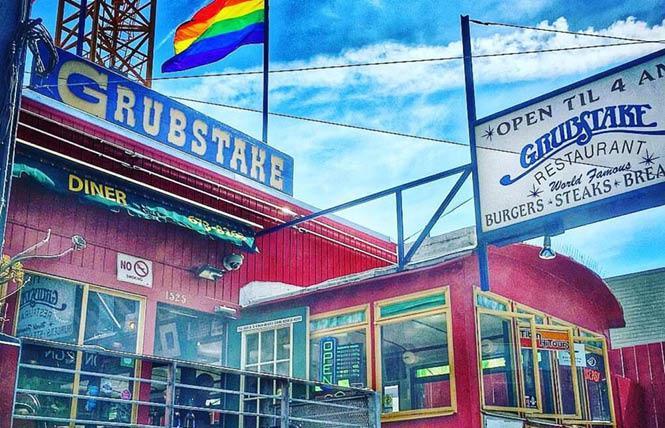 Grubstake, a late-night diner in San Francisco that's beloved by the LGBTQ community, received the OK to add apartments on top of the structure. The San Francisco Planning Commission approved the change 4-2 at its July 22 meeting.

As the Bay Area Reporter previously reported, the diner had the support of almost 70 LGBTQ and allied community members in the form of a petition supporting the building of 21 apartments above the Polk Gulch late-night eatery. The project would see the building rise to eight stories, including the restaurant on the ground floor.

Residents of the neighboring Austin condominium building at 1545 Pine Street had expressed opposition to block the project. During the Planning Commission's July 22 meeting, members of the public had the opportunity to speak in support or opposition to the project.

Mark Cooper, one of those speaking against the project, stated that while he does not "oppose rebuilding the Grubstake," he does oppose the 79 foot height of the project.

"Using data from the sponsor's light study, we can show that the inside of our units will be very dark," Cooper said. "The mornings are the most impacted and will be in the dark to very dark range all year. Having natural light in the morning is very important for me, because that's when I spend most of the time at my home before spending the rest of the day at work."

The project will be providing artificial light to make up for the sunlight that will be eclipsed by the new stories.

Project supporters stated that the eatery is operating in good faith and that owner Jimmy Consos is pursuing the project "to make the salvaging of this historic LGBTQ+-friendly venue financially feasible."

Juanita MORE!, a drag queen and activist, was among those who signed the petition. MORE! spoke at the planning commission meeting in favor of the conditional use authorization.

"I'm super happy to hear the Grubstake Diner rebuilding project has passed through the Planning Commission," MORE! stated in an email. "Its update will be significant for the changing neighborhood. So many elements that have made the diner such a special place will find their way into the new design. I sure hope my portrait does!"

Cal Callahan, a gay man who is the manager of the Leather and LGBTQ Cultural District, also signed the petition. Callahan told the B.A.R. that he is always trying to support local nightlife.

"The Grubstake is one of the places that makes San Francisco 'San Francisco,'" Callahan stated. "I'm grateful they are still here to support those who work and play in late-night entertainment."

Commissioner Theresa Imperial joined Vice President Kathrin Moore in voting against the expansion. She said she is concerned about the "health impacts" of the project.

"With comments [from] the public, especially from the nearby house, [saying the project is] going to impact their access to sunlight, and how about 20 units will be impacted on this, I do think that the substitute of artificial light in terms of access to sunlight is inadequate," Imperial said. "There is a health benefit when there's access to sunlight directly. When you don't have access to sunlight you lose your Vitamin D ... which impacts your behavioral health with anxiety."

Moore and Imperial did not return requests for comment as of press time.

Commissioner Rachel Tanner voted in favor of the project.

"I don't see how this commission can take a look at this project and deny it," Tanner said. "I want to commend the outreach the project sponsor has done with the community, as exemplified by the testimony here as well as written correspondence the commission has received."

Consos did not respond to multiple requests for comment.

Updated July 27, 2021: This article was updated with comments from Cooper, Imperial, and Tanner, and further details, after video of the Planning Commission meeting was made available online.