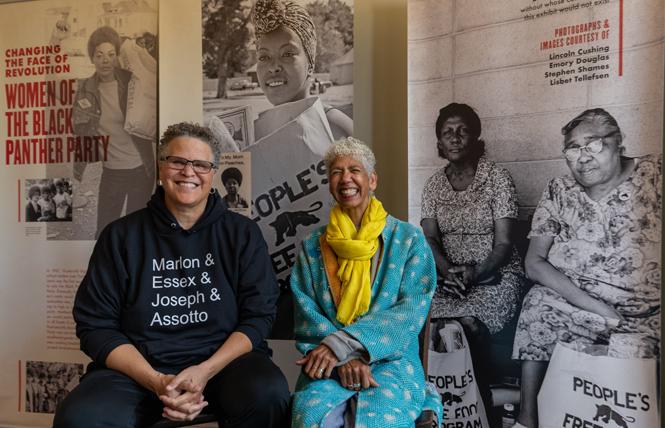 A year after 2020's racial reckoning, three queer women responded by bringing healing and pride that is radiating from a West Oakland house.

It started with the mural commemorating the women of the Black Panther Party and grew into the Mini Black Panther Museum. The mural was unveiled February 14. The museum opened June 19 (Juneteenth).

The 30 foot mural of the Black women participating in the Panthers' community programs is painted by Oakland muralist Rachel Wolfe-Goldsmith on the street-facing side of Vest's two-story house at Center Street and Dr. Huey P. Newton Way.

The four panels of women are based on photographs taken by Stephen Shames, who photographed the Panthers widely. The mural is on one side of the house facing the street and the museum is on the first level of the home.

The Black Panther Party grew out of Oakland in 1966. The organization ran more than 60 community survival programs throughout the U.S. and abroad until it dissolved in 1982. Last year's award-winning film, "Judas and the Black Messiah," told the story of Fred Hampton, the chairman of the Black Panther Party's Illinois chapter.

In the West Oakland museum, women of the Black Panthers are front and center the moment guests enter the first room. Women's presences remain throughout the exhibit, touching on every aspect of the community survival programs to the party's coalition building and media.

Vest worked in the music industry before COVID-19. Currently, she is the director and curator of the mural and museum. She told the Bay Area Reporter while on vacation earlier this month that she wanted the mural to emanate "Black joy" and pride. She wanted to bring visibility to the Black Panther women and show the community what it could and did do for itself using the Panthers as an example.

That's what visitors get, Black joy when they see the mural and museum, she said. "We wanted people to look at the mural and stand stronger, stand taller, put your shoulders back, and say, 'Those are my people. Those are my ancestors,'" Vest said.

"And maybe they can feel a little free for the moment," added former Black Panther Party member Ericka Huggins, a 73-year-old lesbian, who is Vest's mentor on the project.

Since the mural's unveiling in February, an estimated 1,000 people have viewed it to Vest's knowledge, she said. Vest estimates more than 500 people have visited the museum since its opening. The museum, which is only open on weekends, has been sold out since its June opening.

Vest said that she wanted to create something, "Where you can cry tears of joy, which heal you, versus tears of rage, which is what we were all doing last summer. I want that for myself, and I also wanted it for my community, and I wanted it for Oakland."

Creating Black joy and pride
During last summer's racial reckoning and demonstrations against police brutality, Vest was seeking a positive, healing way to channel her anger following the police killings of Breonna Taylor and George Floyd.

Floyd was murdered by former Minneapolis officer Derek Chauvin last May for allegedly buying cigarettes at a Minneapolis market using a fake $20 bill. Video of Chauvin's knee on Floyd's neck as he called out for his mother and crying, "I can't breathe," went viral. Chauvin is currently serving 22.5 years in prison.

Taylor, a Black medical worker, was shot while she slept in her own bed by police entering her home on a no-knock warrant in Louisville, Kentucky in March 2020.

Vest was unsettled, particularly by the silence surrounding Taylor's death two and a half months before the public outcry over Floyd's killing.

A lifelong activist, Vest didn't want to go out into the streets to join the outraged masses. She didn't want to create another mural memorializing Black people who were victims of police brutality. Quarantined due to the global pandemic, she sat in her house meditating.

"I was feeling a lot of grief and a lot of rage, and [I] just kind of meditated on it," Vest said, stating she realized she lost balance and had no joy in her life at that point.

One day, she took a walk along Broadway looking at the murals.

"By the time I got home, I kind of looked up at my house, I said, 'You know, I am going to put a mural on my house and it's not going to be anything about what has been done to us. It is going to be about ... what it looks like [when] ... we do for ourselves," Vest said.

She was also inspired by the "Say Her Name" movement and the invisibility of the women who made up 70% of the Black Panther Party.

"The women of the Black Panther Party have never been honored," she said.

Vest was born in Chicago in 1966 the same year that the Panthers came into existence. Now living in the heart of where the party was rooted and grew for more than 15 years, it felt right to her to honor the women of the party, she said.

Vest called her friend Huggins, who was immediately onboard advising her and reminding her in her warm way, "You have to have their names on the wall."

"I'm sure that many of them have wondered when they would ever be recognized for everything that they did because it was women who sustained all of these party programs," said Huggins, who was the director of the Oakland Community School.

She pointed to a picture of the school's staff and teachers, with her in the background, on one of the panels as she walked around the three-room museum and talked about the programs and friends who have since passed.

The mural includes 260 names of the Panther women. Vest anticipates adding more names as more women are discovered. It took nearly a year to create the mural, which she commissioned for more than $100,000 using small individual donations and community grants, she said. The museum came six months later.

People-powered
Even before the mural's unveiling, a woman walking by asked Wolfe-Goldsmith, who was working on the mural, if there was a museum too. Vest's tenants had just moved out of the downstairs apartment at the beginning of the year.

Wolfe-Goldsmith relayed the woman's question to Vest, who immediately called her friends, community archivist Lisbet Tellefsen and her partner, Huggins, about transforming the apartment into a museum after the woman's suggestion, she said.

During the Panthers' operation, it built a grassroots movement that provided free health care, ambulance, food, senior services, and many other programs. Members worked across communities and movements building coalitions, including the LGBTQ and feminist movements, around the globe, Huggins and Tellefsen told the B.A.R.

The panels and other artifacts throughout the museum provide an overview of the Black Panther Party's history not often taught, Tellefsen, a 60-year-old Black lesbian activist, said.

The Panther's community programs "tend to get lost behind the historical laziness, which just distills them down to angry Black men with guns who had good fashion sense," said Tellefsen.

A majority of the historical material and the Black Panther Party pop-up panels are on loan from Tellefsen, who works in publishing. She created the exhibit for a restorative justice conference tied to the Panthers' 50th anniversary in 2016 produced by Fania Davis Jordan, whose sister is Black lesbian activist Angela Davis, one of the more prominent female members of the Black Panthers. She was glad to take them out of storage and put them to use, she said.

"It really is a singular achievement," Tellefsen said about what Vest has achieved with the museum and mural. "Every step along the way, it has surpassed every expectation."

Huggins added, "People tell us they feel like it is a sacred space to them."

People vaguely familiar with the party tell the women, "It isn't what they were taught," she said. "They need to learn more."

Former Panthers members and other activists say they are "touched," Huggins said. "It makes them cry. It makes them remember."

Currently, the museum is supported through Vest's own donation of the vacant apartment. She lives on the top floor of the house. Vest hopes to make the museum permanent and transform the exhibit and space into a community space.

"My ownership of the project ends at the property line and beyond that it belongs to everyone else," she said.

To reserve your spot, click here. Tickets are $12.50 per person, including fees.

Updated, 7/26/21: This article has several corrections. The name of the person who photographed the Black Panthers is Stephen Shames; he was not their official photographer but took pictures of them widely. Angela Davis' sister is Fania Davis Jordan.

Schlomer Haus art gallery opens in the Castro
Sign up!