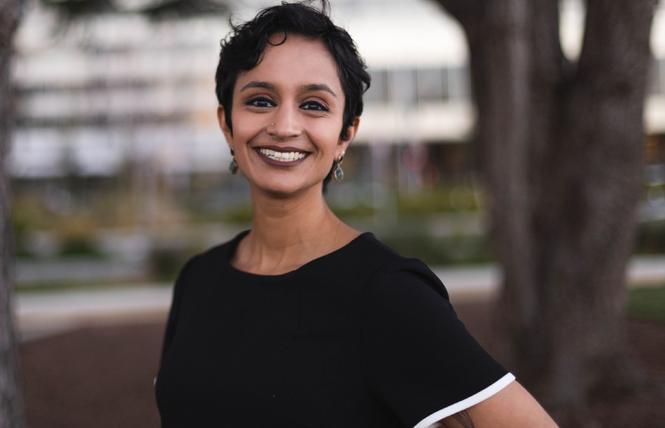 Both the LGBTQ Victory Fund and the California Legislative LGBTQ Caucus have now endorsed Ramachandran, 29, who also identifies as lesbian. If elected, she would be the first legislator who identifies as queer and first out API female state legislator. Of South Indian ancestry, she would also be California's first South Asian assemblywoman.

"Janani's commitment to community-based solutions that address the real issues facing California residents with progressive action makes her the ideal candidate for this district," stated Victory Fund President & CEO Annise Parker. "I do not doubt that once elected, Janani will enact true, transformative change for her constituents and the entire state."

Noting she was one of eight LGBTQ Victory Institute national fellows in 2020, Ramachandran stated she is "incredibly honored to have the support of this LGBTQ political trailblazing organization that gave me many of the tools and training I needed to get my start in the political world. Victory helps elect hundreds of LGBTQ lawmakers across the country — and representation truly does matter."

A spokesman for gay Assemblyman Evan Low (D-Campbell), the chair of the affinity group for out lawmakers in the Legislature, told the Bay Area Reporter Low was traveling Friday and could not be reached for comment. He is listed as having personally endorsed Bonta, according to her list of endorsers. LINK: https://www.miabonta.com/endorsements#endorsements

Ahead of the special election held June 29 for the Assembly seat, bisexual Assemblyman Alex Lee (D-San Jose) had dual endorsed Ramachandran and another candidate who failed to survive the primary. Gay state Senator Scott Wiener (D-San Francisco) has yet to personally endorse either candidate in the runoff race.

The California Asian and Pacific Islander Legislative Caucus also solely endorsed Ramachandran this week. The first-time candidate has proved to be a formidable figure in the race, tapping into a network of family and friends for donations to amass a sizeable campaign war chest.

Bonta, 49, a Black Latina, was the first place finisher in the contest last month, while Ramachandran came in second with neither surpassing the 50% vote threshold required to win the seat outright. One of the two is set to become the Bay Area's fifth female state legislator, representing Alameda, San Leandro, and a portion of Oakland in the Legislature's lower chamber.

The East Bay Stonewall Democratic Club did not endorse in the race as no candidate received the 60% required when it held its endorsement vote in the spring. After they failed to advance from the June primary, gay candidates San Leandro City Councilman Victor Aguilar Jr. and San Leandro Unified School District Board of Education member James Aguilar (no relation) both endorsed Ramachandran.