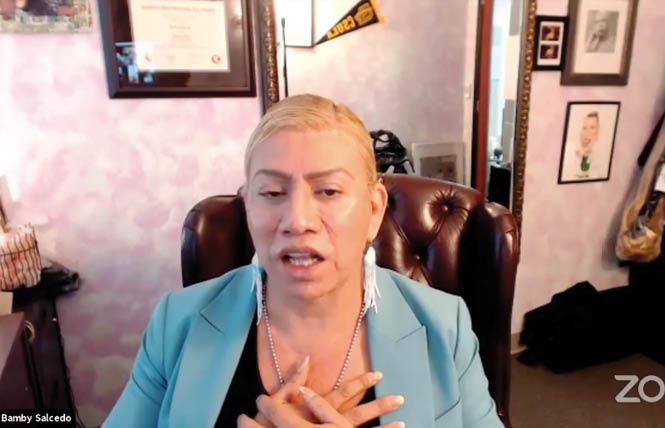 Bamby Salcedo, president and CEO of the TransLatin@ Coalition, announced that $13 million for the Transgender Wellness and Equity Fund is in the budget Governor Gavin Newsom signed July 13. State lawmakers created the fund last year but did not award any money to it because of the COVID-19 pandemic. Photo: Screengrab via Zoom

In what one trans activist called "a testament to the power we have as a community," $13 million was appropriated to the Transgender Wellness and Equity Fund in the state budget that California Governor Gavin Newsom signed July 13.

Bamby Salcedo, a trans Latina immigrant woman who is the president and CEO of the TransLatin@ Coalition, told the Bay Area Reporter the allocation is not only a witness to the power the trans community has but also "the possibilities" of what can happen when the TGI community gets engaged in the political process.

Salcedo said that the fund "was crafted, organized and pushed all the way to the governor's desk" by trans people and trans-led organizations.

"I'm super ecstatic," Salcedo said. "Our governor has been able to invest in trans lives and organizations. We made history."

As the Bay Area Reporter previously reported, the trans wellness and equity fund was first introduced in the Legislature in 2020 by Assemblyman Miguel Santiago (D-Los Angeles), a straight ally.

The bill — intended to assist organizations serving people that identify as transgender, gender-nonconforming, or intersex, and help create or fund TGI-specific housing programs and partnerships with hospitals, health care clinics, and other medical providers to provide TGI-focused health care — did not look like it was going to pass at one point, due to its $15 million price tag at a time of budgetary concern prompted by the COVID-19 pandemic.

But after the TransLatin@ Coalition fought for Assembly Bill 2218 for months, rallying support and testifying at hearings, and after the funding was removed from the bill, it became law.

After COVID-19 budgetary concerns faded — indeed, the state boasts a $75.7 billion surplus — the TransLatin@ Coalition joined over 25 organizations to create the California Transgender, Gender-Nonconforming, Intersex Policy Alliance to push for money for the fund.

In an emailed statement to the B.A.R., Santiago touted the first-in-the-nation state fund.

"I am thrilled that the California budget includes $13 million for the Transgender Wellness and Equity Fund," Santiago stated. "For nearly two years, the California Transgender, Gender-Nonconforming and Intersex (TGI) Policy Alliance and I have been fighting to provide medical, mental health and supportive services for the critically underserved TGI community. This funding is the first of its kind in the country and will contribute to the health and wellness of California's TGI community."

The alliance sought $15 million over two years, Salcedo said at the time. That had to be pared down to $13 million, Salcedo told the B.A.R., because of "other budgetary priorities."

"Nonetheless, $13 million is still a win for our community," Salcedo said.

The California Department of Public Health responded to a request for comment after the initial publication of this story, stating that "CDPH is not authorized to disburse any funds prior to September 30, 2021. We expect to start the procurement process in the weeks and months after the authorization date."

The funding opportunities will be listed on the state's grant portal at https://www.grants.ca.gov/

Interested organizations will "have to go through the procurement process," Salcedo said.

"When the announcement goes out, people will have the opportunity to apply and hopefully get some funding; but obviously, it's a competitive process," she added.

According to the legislation, an organization has to have "a mission statement that centers around serving transgender, gender-nonconforming, and intersex people, and where at least 65% of the clients of the organization are TGI" to receive funding.

Updated, 7/15/21: This article has been updated with comment from the state public health department.