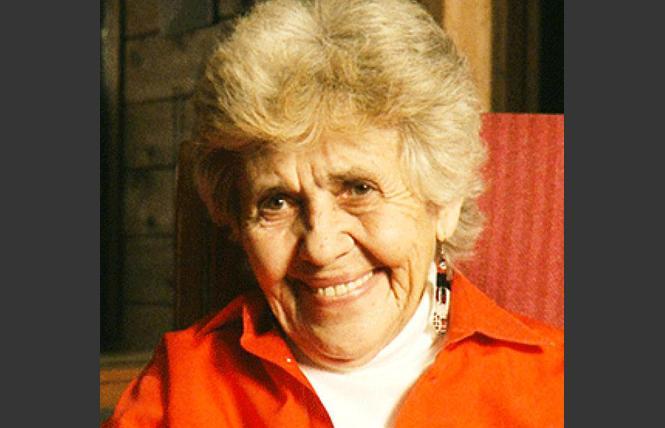 Sally Miller Gearhart, the first out lesbian to receive a tenure-track position at San Francisco State University and a beloved LGBTQ rights advocate, died July 14, according to Jean Crosby, who sent out an email to friends. She was 90.

Ms. Gearhart had been in poor health for several years. She had lived for many years in Willits, California but had moved recently to a care home in Ukiah.

The GLBT Historical Society posted on Facebook about Ms. Gearhart's passing, of which they were informed by her good friend, Ruth Mahaney.

"Losing Sally is like a huge tree falling. She was very tall, and she was so important in the world," stated Mahaney. "She had been saying she wanted out of here, to be 'up in the sky.' She was ready to go."

In 1973, Ms. Gearhart received the tenure-track position at SF State. She established one of the first women's and gender studies programs in the country while at the university, and was a leading LGBTQ activist throughout the 1970s and 1980s.

Ms. Gearhart was featured in the Oscar-winning documentary "The Times of Harvey Milk" (1984), having been a friend and colleague of Milk, the late gay San Francisco supervisor. Ms. Gearhart worked with Milk on the 1978 defeat of Proposition 6, a California ballot initiative that sought to exclude gay men and lesbians from teaching in public schools. Ms. Gearhart was also an acclaimed author of feminist science fiction.

During the Prop 6 campaign, Ms. Gearhart and Milk debated then-state Senator John Briggs, the author of the anti-gay initiative. It is a clip of that debate that is featured in the documentary.

"Harvey Milk and I did wonderful things together. We looked like mom and pop," Ms. Gearhart recalled of their work on the ballot measure campaign in Deborah Craig and Veronica Deliz's 2018 short documentary "A Great Ride."

The film showcased the lives of a number of senior lesbians living throughout Northern California. The filmmakers followed Ms. Gearhart as she drove her beat up jeep with her dog, Bodhi, by her side through the Women's Land all-female community she helped establish in Willits.

With the camera rolling, the relatively reclusive Ms. Gearhart at that point in her life discussed her fears about aging. In her later years Ms. Gearhart had declined media interviews, while her friends raised funds to cover the cost to care for her.

"I am scared to lose my ability to drive and my independence," she told the filmmakers.

Ms. Gearhart was also featured in "Last Call at Maud's," a 1993 film about the former San Francisco lesbian bar. Carrie Preston portrayed her in the 2017 TV miniseries "When We Rise," which was partially inspired by gay activist Cleve Jones' memoir of the same title.

Craig has been working on a full-length documentary solely about Ms. Gearhart, which she had told the Bay Area Reporter she hoped to release this year. She found her to be "charismatic" and "a quirky hero."

"She has this whole arc to her story that is really kind of ... hopefully we can make a great American story of transformation. She was this small town Southern girl and becomes a character and leader and icon," Craig had told the B.A.R.. "A lot of people, women especially, felt she hasn't gotten her due. She was written out of the 'Milk' film. I try not to pass judgment, but that is what happened."

Terry Beswick, a gay man who's executive director of the GLBT Historical Society, talked about the significance of Ms. Gearhart's life in a Facebook post.

"Sally's contributions to LGBTQ history and culture were immeasurable," Beswick stated. "She was a courageous fighter for equality at a time when it made an indelible difference then and now. So many people do not know her story, and I'm so glad that there is a documentary in the works to honor this unsung hero."

In the mid-1970s, Ms. Gearhart was co-chair of the Council on Religion and the Homosexual. This organization offered a variety of speaking events and literature to educate followers on the Judeo-Christian tradition. It also educated legislators about LGBTQ people and the issues that they faced.

Ms. Gearhart was born in Pearisburg, Virginia, on April 15, 1931 to Sarah Miller Gearhart and Kyle Montague Gearhart. According to her Wikipedia entry, Ms. Gearhart attended an all-women's institution, Sweet Briar College, near Lynchburg, Virginia. She graduated with a bachelor of arts in drama and English in 1952.

At Bowling Green State University, she obtained a master's degree in theater and public address in 1953. She continued on at University of Illinois at Urbana-Champaign, getting her Ph.D. in theater in 1956, with the intent of pursuing a life of academia.

Updated, 7/14/21: This article has been updated to note the GLBT Historical Society comments came from a Facebook post. 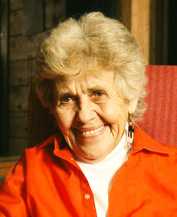