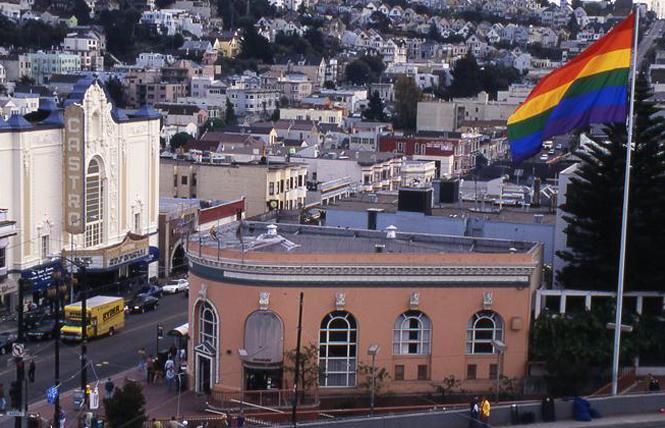 It was nearly a year ago that we editorialized in favor of raising a more inclusive Pride on the giant flagpole at Castro and Market streets. The proposal landed with a thud. The Castro Merchants Association, which oversees the flag and flagpole, however, did write in a guest opinion that we published saying it would "support any community effort to erect an additional flagpole or some other installation in a significant location in the neighborhood to fly flags that symbolize the diversity of our LGBTQ+ residents and visitors, and would use any influence we have with the city to push this through." The main sticking point is that the flagpole and flag, made by the late Gilbert Baker, are legally recognized by the city as a work of art. It will be eligible for city landmark status in 2022, according to the merchants' group.

The Castro LGBTQ Cultural District's board weighed in on the issue last month by voting in favor of replacing Baker's rainbow flag with the Progress Pride flag. That prompted the merchants association to issue a statement that it would seek to install a second flagpole in the Castro where different versions of the Pride flag could be flown. The cultural district board recently announced that it will conduct an online survey, beginning July 26, to gather community input about the flag and flagpole proposals. The survey will be followed by a town hall meeting. Actually, it should have happened in reverse order. The district board should have scheduled the survey and town hall meeting before taking their vote on the flagpole. As it stands, we all know the cultural district leaders' positions on the issue (at least those members who showed up to the virtual meeting); rendering a town hall meeting less effective and somewhat meaningless. It's yet unknown, but perhaps unlikely, that the cultural district board will change its position if the survey results tip in favor of leaving the flagpole as it is, with Baker's flag. The district board is doing what it accused the CBD of with its failed camera proposal: forming a proposal and thereby an opinion first, then having an online survey and town hall meeting after.

The cultural district board picked a long-debated topic as its first major initiative for the neighborhood. The merchants group has visited the flagpole issue many, many times over the years and ultimately decided on a policy to leave Baker's flag flying at full staff 24/7 year-round. The Gilbert Baker Foundation, which was formed after his death in 2017, stated last year that "the rainbow flag was meant to represent all colors, creeds, races, ethnicities, and sexual orientations. It was meant to be everybody's flag."

When the city legislation to create the LGBTQ cultural district was introduced in 2018 by gay then-Supervisor Jeff Sheehy, the goals of the organization were preserving, sustaining, and promoting the LGBTQ history and culture of the neighborhood. "This will include highlighting structures and sites important to LGBTQ history; fostering racial, ethnic, and cultural diversity among residents and businesses; and creating a safe, beautiful, and inclusive space for LGBTQ and allied communities," as we reported at the time.

More importantly, the Castro LGBTQ Cultural District should play a role in bringing the community and neighborhood organizations together toward common goals. In that vein, it could be working with the city to connect unhoused people with services. It could be collaborating with the Castro Merchants Association to promote the neighborhood as a commercial destination. The cultural district did do a good job pulling together this year's activities for Harvey Milk Day, an in-person event that celebrated the gay icon. It also joined forces with the Harvey Milk and Alice B. Toklas LGBTQ Democratic clubs to present a unified front in opposition to the CBD camera proposal. The big gripe among Castro merchants is that tourists step off the bus, get their picture taken in front of the flag, and leave. The cultural district could be spearheading initiatives to address this and other issues for neighborhood residents and merchants in tandem with the CBD and the merchants group or independently from them.

The Transgender District has set a high bar, as has the Leather and LGBTQ Cultural District, for community engagement. Both have used their leverage with City Hall and elected leaders to get funds for projects like painting light poles with the trans flag colors and creating Eagle Plaza — thanks to its work with the builder of a nearby housing development — and landmarking the Eagle Tavern. The leather district board has been working with the planning department and the San Francisco Municipal Transportation Agency on the streetscape project for Folsom Street. The Transgender District has been working to secure housing for trans people and bringing the history of the Tenderloin alive.

We recognize the Castro LGBTQ Cultural District is newly formed, and that it started in the midst of the COVID-19 pandemic. It has a lot of committees that people can get involved with: cultural heritage, tenant protections, arts and culture, economic and workforce development, land use, and cultural competency. Those wishing to have a voice in the Castro's future should get involved. And the district's board should do more proactive outreach as it moves forward.