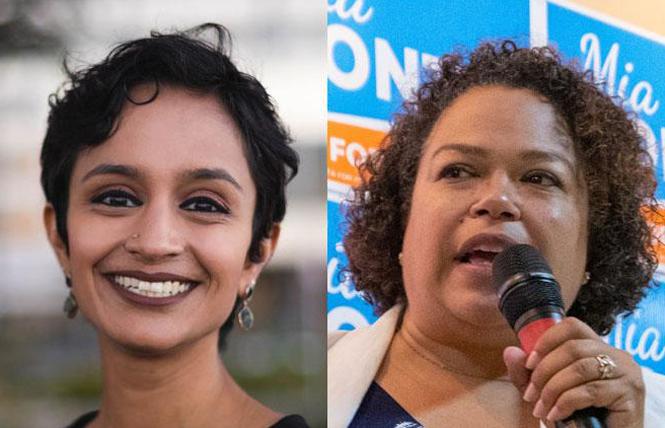 Social justice attorney Janani Ramachandran is crying foul over how the California Democratic Party handled its endorsement process in her August 31 runoff race against Mia Bonta for the East Bay's Assembly District 18 seat. The women are vying to succeed Bonta's husband, Rob Bonta, who resigned earlier this year to become California's attorney general.

Bonta, president of the Alameda Unified School Board, took first place in the June 29 special election but fell short of the more than 50% threshold she needed to win outright. Ramachandran landed in second place ahead of six other candidates.

A supermajority of the party's state central committee voted to endorse Bonta at the end of the Fourth of July weekend. In turn, Ramachandran's campaign filed an official objection with the state party alleging the "rushed endorsement vote over the holiday weekend" resulted in irregularities and violated the party's own conflict of interest rules. It also claimed delegates accused of forgery were allowed to vote without the party first investigating the allegations.

"When the Republican Party works to suppress votes — we rightly cry foul. When the Democratic Party adopts a voting process that by definition denies full access — we should raise our voices as one to speak out for a fair and just voting process," stated Ramachandran, an Oakland resident who also identifies as lesbian.

The California Democratic Party Endorsement Appeals Committee upheld Bonta's endorsement July 7, prompting the party to officially announce a day later its backing of her to represent Alameda, San Leandro, and a portion of Oakland in the Legislature's lower chamber.

"As a daughter of Puerto Rican activists, Mia knows firsthand what it takes to make equitable progress within our communities," said state party chair Rusty Hicks. "From her drive to advance economic mobility among our most underserved communities to her lifelong dedication towards improving educational outcomes for low-income students — Mia is the leader we need in the California State Legislature."

One of the accusations Ramachandran's campaign has leveled against Bonta is that she and her mother committed voter fraud and forged signatures during the local party's previous endorsement vote ahead of last month's contest. It criticized the state party leaders for ignoring those claims.

"Ramachandran's baseless allegations and cries of fraud echo those of Donald Trump and national Republicans who seek to undermine voter confidence in the election process, a dangerous narrative we as a party must not feed into," stated Brown. "Mia Bonta is proud to have earned the endorsement of the CA Democratic Party and is focused on continuing to address the issues voters care about like homelessness, education and rebuilding after the pandemic."

Neither the state party nor the Alameda County Democratic Party provided comment about the endorsement dispute when contacted by the B.A.R.

Meanwhile, the California Asian and Pacific Islander Legislative Caucus solely endorsed Ramachandran this week. Its chair, state Senator Dr. Richard Pan (D-Sacramento), called her "a champion for social justice and a strong advocate for the Asian American Pacific Islander community as a member of the California Commission on APIA Affairs."