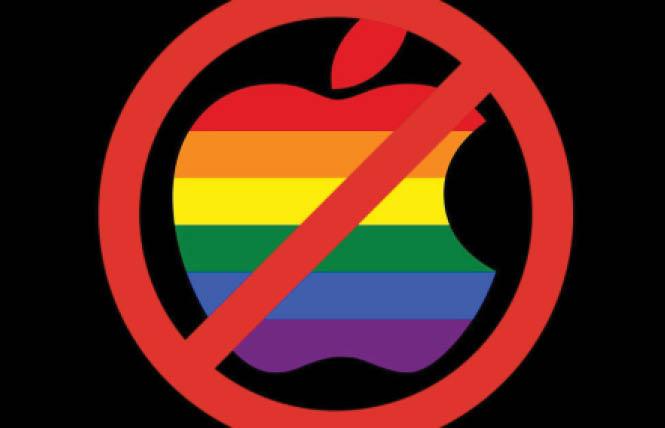 A new report raises questions about why some queer apps are not found on Apple's App Stores in countries outside the U.S. Photo: Courtesy Fight for the Future

Some of the most popular LGBTQ phone apps are unavailable in Apple's overseas App Stores, prompting concerns the gay-led tech giant is collaborating with censorship in countries unfavorable to queer freedoms.

Fight for the Future, a digital rights nonprofit based in Massachusetts, and GreatFire, a group that helps internet users in the People's Republic of China circumvent the government's famous firewall, released a report last month alleging 1,377 cases of 61 apps not being found across 152 App Stores around the world.

"Most of the App Stores where the most number of apps are blocked, coincide with countries already low on the list for human rights for the queer community," Fight for the Future states. "Underscoring Apple's role in enabling this censorship is cases such as Malaysia, whose government criminalizes homosexuality but where only seven LGBTQ+ apps are removed from its App Store; or Niger and South Korea, where homosexuality is not illegal, but whose App Stores are within the top 10 with most unavailable LGBTQ+ apps."

The top five countries where LGBTQ+ apps were not available in Apple's App Stores were Saudi Arabia (with 28 instances of alleged censorship), the People's Republic of China (27), the United Arab Emirates (25), Ghana (24), and Nigeria (23).

Homosexuality is illegal in all of those countries except China.

There were no instances of apps being withheld from the App Store in the United States.

Utsav Gandhi, a campaigner and researcher with Fight for the Future, told the Bay Area Reporter that "the crux of the campaign is there could be a number of reasons these apps are not available."

"One is Apple is complying with government regulations, which is what we suspect is happening," Gandhi said. "Two: Apple is pre-emptively taking down apps on its own. Three: the app itself is choosing not to be listed in a particular country, because it is suited for one audience or not."

Still, Gandhi said that the concern Apple is collaborating with anti-LGBTQ censorship is very real. "Since there is no transparency around this we have no idea which particular one it could be." Gandhi said.

"Tim Cook is one of the most out CEOs," Gandhi said. "Apple does a lot of pinkwashing and rainbow-washing. They have Pride-specific brands available, march in Pride parades, and have thousands of LGBTQ+ employees, so we wanted to call that out specifically."

Rainbow-washing, or pinkwashing, refers to the practice of some corporations to commemorate Pride Month with rainbow avatars online, products marketed toward LGBTQs, or supportive statements, while behind the scenes engaging in practices that are harmful to queer people such as, for example, donating to politicians who are against LGBTQ rights.

A spokesperson for Apple, who did not want to be named or directly quoted, told the B.A.R. that the report is inaccurate, that only four of the 61 apps were removed for legal reasons from particular countries. None of the apps unavailable in China were removed by Apple, the spokesperson pointed out, stressing that developers control what countries they want their apps to be available in, and may choose not to operate in certain areas for a number of reasons.

Gandhi told the B.A.R. in a follow-up interview that these are "talking points" that Apple has "been pushing with other outlets as well."

"I would double down on what I said earlier," Gandhi said. "The mere fact that developers are forced to make this decision on their own is different than what happens for Androids and Mac OS. We are pushing for direct downloads of web apps from the open internet."

Gandhi said that the App Store limits the freedom of app developers.

"The overall takeaway is the same for us," Gandhi said. "The larger part is users should be able to download apps on the open internet rather than [the app developers] being forced to make a decision."

Gandhi said during the initial interview that the apps that weren't available were "found across categories — entertainment, social connection, dating, et cetera." He gave as an example the app weBelong — Find Your Community was not found in 144 App Stores.

WeBelong — Find Your Community, which describes itself as a safe digital hub, did not respond to a request for comment by press time.

Grindr, Jack'd, and EDGE Gay/Lesbian News did not respond to requests for comment by press time.

Gandhi said that the App Store acts as a "gatekeeper" for Apple products in ways that aren't applicable to phones produced by other companies.

"But there are several fake apps and scams in the App Store anyway," Gandhi said. "Fifty to 100 apps a day are taken down, often with people taking less than a minute to decide.

"So, we don't know the real reason," Gandhi concluded.