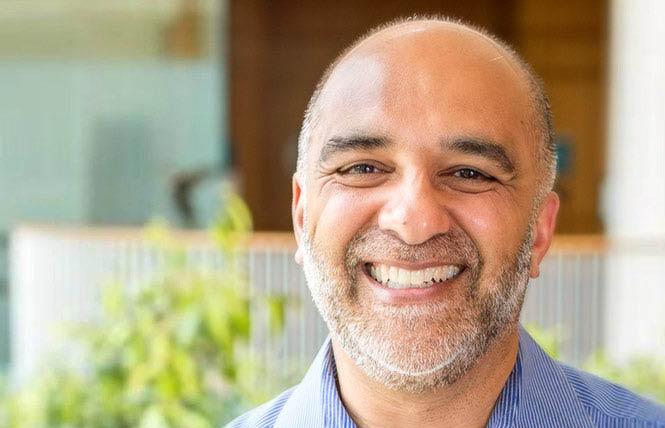 Micky Tripathi, Ph.D., is the national coordinator for health IT. Photo: Courtesy Careersinfosecurity.com

A federal agency that certifies the use of electronic medical records is requiring the creators of the computerized systems ensure such data as patients' sexual orientation and gender identity can be easily shared among health care providers, governmental agencies, and researchers. It is a first step toward creating a systemized way to securely capture and exchange the SOGI data among various entities.

The federal Office of the National Coordinator for Health IT published on July 9 version 2 of the United States Core Data for Interoperability, known as USCDI v2. It sets the standards nationwide for health information exchange and establishes the baseline for what data is commonly exchanged across care settings for a wide range of uses.

In a virtual interview with the Bay Area Reporter Friday, National Coordinator for Health IT Micky Tripathi, Ph.D., explained that the federal office has for years required that the creators of electronic medical records systems include fields to ask about SOGI. Now, they will be required to make sure such data is shareable with other health care providers.

"It is a unique and important lever that we have. We try to make sure those systems are capable of recording information and using information in ways that are important to the public interest," said Tripathi, a straight ally who started as the national coordinator as soon as President Joe Biden was sworn into office on January 20. "The Biden administration feels it is very important to be sensitive to the diversity and differences of the entire U.S. population."

While the federal office is ensuring that the SOGI data can be collected, it does not have the authority to require health professionals, such as doctors and nurses, to record and share the data. The release of the updated standards hopefully will lead to federal agencies with the authority to do so making the collection of SOGI data a requirement, said Tripathi.

"It is not the conclusion of this part of the story," he said. Rather, Tripathi said his office is "kicking that off. Here is the first stake in the ground. This is where we are headed, and now we need to have the regulatory cycle back it up with more and more teeth."

By laying the groundwork for health IT professionals to build systems that allow for the exchange of the SOGI data as the information becomes applicable to an individual's care, the Biden administration is signaling that it supports seeing the SOGI data become a required category that is collected.

"The updated U.S. Core Data for Interoperability takes an important step in reflecting the needs of all patients who access the nation's health care system," stated Dr. Rachel Levine, a transgender woman who is the U.S. Department of Health and Human Services' assistant secretary for health, in a news release announcing the updated standards. "For accurate, compassionate, and safe care, it is important for a patient's sexual orientation and gender identity to be part of their care coordination and this new version helps prioritize next steps for the healthcare community as well as help identify patients' specific nonmedical needs — like housing, transportation, and poverty — that affect health to coordinate care and assistance to improve health outcomes."

Revisions applauded
LGBTQ advocates who have been pushing to see that SOGI data become a routine part of the medical intake process, and that such information be easily shared for health-related purposes, applauded the revisions to the USCDI v2.

"Fenway Health strongly supports the inclusion of sexual orientation and gender identity (SOGI) questions and data in the demographics section of USCDI v2. We also support the inclusion of social determinants of health (SDOH). We commend the Office of Health Information Technology for including these important data so critical to providing competent, affirming care in our nation's health IT interoperability system," Sean Cahill, Ph.D., the Boston-based agency's director of health policy research, told the B.A.R. in response to a request for comment.

"We look forward to working with health care providers and patients to ensure voluntary collection and use of SOGI and SDOH data to provide affirming, holistic care while protecting patient privacy and confidentiality," he added.

Catie Stewart, the communications director for gay state Senator Scott Wiener (D-San Francisco), who has become a vocal advocate for SOGI data collection amid the COVID-19 pandemic but was unavailable for comment, told the B.A.R. that the release of the revised federal standards "is an exciting update that we hope will allow for better and more consistent SOGI data collection."

She added in an emailed reply, "The LGBTQ community has historically been marginalized in our health care system, and during the pandemic, no consistent or meaningful data was collected about the LGTBQ community and COVID-19 throughout the state. That's unacceptable and needs to change. This is a good first step."

Pandemic shined light on issue
The health crisis brought into stark relief how the lack of SOGI data can result in public health officials being blind about the medical needs of LGBTQ individuals. At the start of the COVID-19 pandemic, it was unknown how many LGBTQ people were testing positive for the novel coronavirus or dying from it.

Many LGBTQ people have underlying health issues that make them more susceptible to COVID-19 or work in front-line industries that place them at higher risk of contracting the virus, sparking concerns about just how widespread infections and deaths were in the LGBTQ community. California officials took steps last summer and in the fall to address the lack of SOGI data but then ran into problems with the health record systems being used around the state.

They either had not been updated to ask the SOGI questions or were unable to share the data with state health officials because of problems with what are known as the Health Level Seven International (HL7) standards. The HL7 standards omit sexual orientation data and use outdated terms for gender identity.

A coalition of more than 60 organizations working in LGBTQ health care in April had sent a letter to Tripathi and Deputy National Coordinator for Health IT Steven Posnack requesting that the SOGI questions be included in the final USCDI v2, along with intersex status, name used, and pronouns. An advisory committee to the Office of the National Coordinator for Health IT also called for the SOGI questions to be added to USCDI v2.

"Until we're allowed to come out on health forms, key information like how many of us get COVID-19 or cancer every year will never be known," stated Scout, Ph.D., the executive director of the National LGBT Cancer Network, which helped organize the joint communiqué. (Scout uses one name.)

"We need to be collecting voluntary SOGISC data from patients throughout every level of our health system. The failure of health institutions to routinely collect SOGISC data puts us at risk," read the letter, using the acronym for sexual orientation, gender identity, and variations in sex characteristics (also known as intersex status).

Fenway Health and the Whitman-Walker clinic in Washington, D.C. both helped initiate the writing of the letter. In a phone interview with the B.A.R. July 9, Benjamin Brooks, J.D., M.P.H., a gay man who is Whitman-Walker's assistant director of policy, noted that despite intersex still being omitted from the USCDI v2., it "is an extremely important and helpful update" and a "good step in the right direction."

The new standards on SOGI data collection will help health care centers across the country better understand how many of their patients are LGBTQ and provide them with the data they need to tailor their services toward their health needs, said Brooks. They could also lead to more collaboration among a greater number of health centers treating LGBTQ Americans, he said, and improved data for their advocacy on LGBTQ health issues and needs.

"It opens the doors to the kind of services and clinical care they need to be offering," said Brooks. "In particular these changes could make health care centers have affirmative data policies. It opens doors for other inclusive policies like having inclusive and welcoming environments for sexual and gender minority patients."

Whitman Walker is part of a research collaborative with other health clinics across the country that serve LGBTQ individuals, noted Brooks, so the revised standards will make it easier for those health care providers to share the SOGI data they are collecting with each other for research and advocacy purposes.

"The big picture on a national scale having routine data collection for LGBTQ people helps to give us a bigger picture of what the urgent areas of health care needs are for sexual and gender minority patients," said Brooks. "It opens the door for understanding best how to advocate for and allocate resources and research to address the urgent needs of the community."

Version 2 of the United States Core Data for Interoperability can be accessed online here.