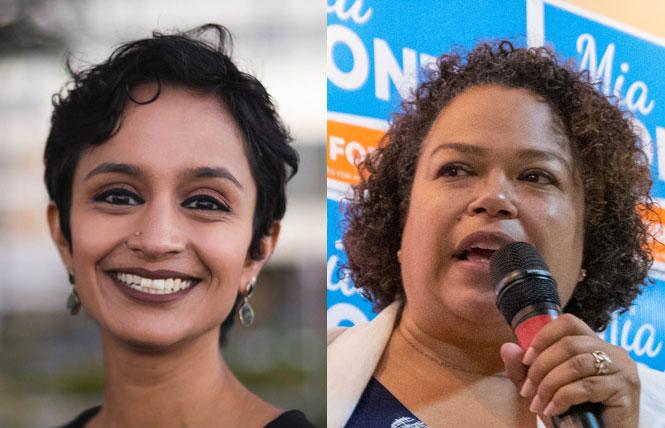 No matter the outcome of the special election for the East Bay's 18th Assembly District seat, one thing is now guaranteed. A woman of color is set to represent Alameda, San Leandro, and a portion of Oakland in the California Legislature come September.

The winner will bring the number of female Bay Area state lawmakers up to five, as the rest of the 23 legislative seats that circle the region are held by men. And should social justice attorney Janani Ramachandran be elected, she will be the first LGBTQ state legislator from the East Bay.

Ramachandran, 29, would also be the first legislator who identifies as queer and first out API female state legislator. Of South Indian ancestry, she would also be California's first South Asian assemblywoman.

The Oakland resident, who also identifies as lesbian, came in second place among the eight candidates who ran in the June 29 special election to succeed Rob Bonta. He resigned earlier this year when Governor Gavin Newsom swore him in as the state's attorney general.

But Ramachandran faces an uphill climb to defeat Bonta's wife, Mia Bonta, in the August 31 runoff race for the legislative seat. Bonta, 49, a Black Latina, has long been seen as the frontrunner in the race and took first place in last week's contest with 38% of the vote, according to the unofficial returns.

Bonta, president of the Alameda Unified School Board, fell far short of the more than 50% of the vote she needed to win the seat outright. Ramachandran garnered about 24% of the nearly 60,200 ballots cast.

The political newcomer surprised election watchers with her ability to tap into a network of family and friends to raise money and considerable support from fellow progressives. She was able to best Alameda Vice Mayor Malia Vella, 36, who landed in third place with close to 17% of the vote.

In conceding the race July 1 Vella expressed hope that soon, the state Legislature would welcome its first Filipina member. Rob Bonta was the first member of Filipino descent.

"I look forward to the day when a Pinay serves in the CA legislature and hope that the voices of democratic #AAPI women and Filipinos will be uplifted despite remaining unrepresented," tweeted Vella, who has yet to endorse in the runoff race.

Bonta announced July 5 that she has received the endorsement of the California Democratic Party for the runoff race.

Talking to the B.A.R. last month about her candidacy, Ramachandran expressed confidence that voters in the district would be willing to take a chance on someone new with fresh ideas. She pointed to a cultural shift in recent election cycles where voters gravitated to non-traditional political candidates.

"It's just really thrilling to have folks be excited about someone like me and someone different and fresh and having bold ideas out here. We are reaching such a wide variety of people I never anticipated to reach in this district," said Ramachandran. "It is truly exciting to see that people are excited and energized about progressive policies and about a fresh, relatively young new lawmaker."

The two gay Democrats who failed to advance past the June 29 contest have both endorsed their former queer opponent. As the B.A.R. noted in a story posted to its website the day after the election, San Leandro Unified School District Board of Education member James Aguilar, 21, was the first of the two to endorse Ramachandran. In seventh place on election night, Aguilar has since moved up to sixth place with 1,038 votes.
Also on June 30 the third out candidate in the contest, San Leandro City Councilman Victor Aguilar Jr., 42, threw his support behind Ramachandran. No relation to James Aguilar, he ended up in fifth place with 3,934 votes.

"We have created a diverse and enthusiastic coalition of supporters for #AD18 Special Election!" she tweeted.