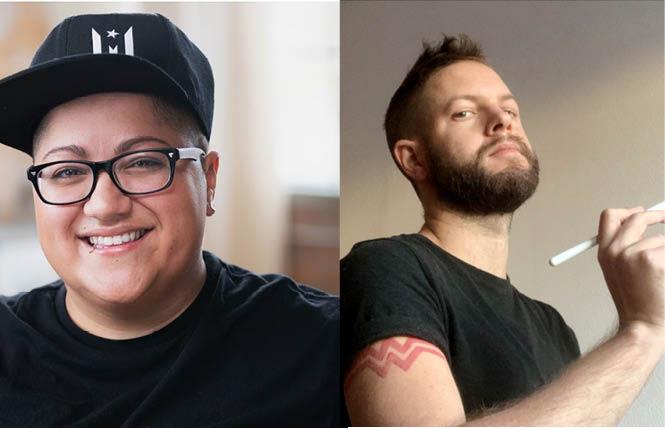 It's important, especially for children and young adults, to see images like ourselves in the media. Comics and graphic novels are increasingly popular and LGBTQ characters are popping up more often in their pages.

So for this week's Out in the Bay Queer Radio + Podcast, producer Porfirio Rangel spoke with comics story writer Gabby Rivera and illustrator Luciano Vecchio about their work, queer representation in comics, their experiences in the industry, and their coming out advice.

Vecchio drew gay superheroes Wiccan and Hulkling for Marvel's Pride edition (the two are lovers, by the way, and Hulkling is Captain Marvel's son) and the Pride edition's cover art. He lives in Buenos Aires, Argentina, and has works published in the U.S. and many other countries.

Rivera is known for writing a 2017 series featuring America Chavez, Marvel's first queer Latina superhero, whom Rivera described as "so powerful she can punch portals into other dimensions." Rivera also wrote "Juliet Takes a Breath," a young adult novel about a butch queer Latina from the Bronx — a lot like herself — who is on a journey of self-discovery.

America Chavez, Wiccan, and Hulkling — like some other characters in Marvel's Pride edition — had appeared in earlier Marvel editions, then laid dormant. Rivera and Vecchio both said it can be intimidating but also fun to revive these superheroes in a way that gives them current relevance while also respecting their legacies.

"I really like the exercise of rescuing queer characters from limbo and giving them new energy and new life," and are among his favorite heroes to draw, said Vecchio.

On why queer representation in comics matters, Vecchio said, "Seeing ourselves in fiction helps us create our own perceptions of ourselves." It also helps "the rest of the audience to get to know, interact, and be ready to welcome and protect queer people, kids especially," Vecchio added

Rivera spoke about homophobia, misogyny, and racism she has experienced within the comics industry. She said some other creators criticize her for writing about herself.

"Hell yes, I do! Who else is writing about me? I want you to sit there and think, and name five Puerto Rican butches, besides me, that you know," she challenged. "You got none. We're not on TV, we're not in the movies, we're not romantic interests, we're not generating our own comic spin-off series.

b>Hear more from Gabby Rivera and Luciano Vecchio, on this week's Out in the Bay — Queer Radio from San Francisco. The program airs 9:30 a.m. Saturday, July 3, on KSFP, 102.5 FM in SF only, and is available anytime, anywhere on Out in the Bay's website, where you can also see some of Vecchio's colorful queer superhero drawings. Out in the Bay also airs at 10 p.m. Tuesdays on KALW, 91.7 FM throughout the Bay Area.

Eric Jansen is managing producer of Out in the Bay — Queer Radio from San Francisco. Hear current and past shows at https://www.outinthebay.org/

Out in the Bay: After COVID hiatus, trans soprano to perform in person
Sign up!