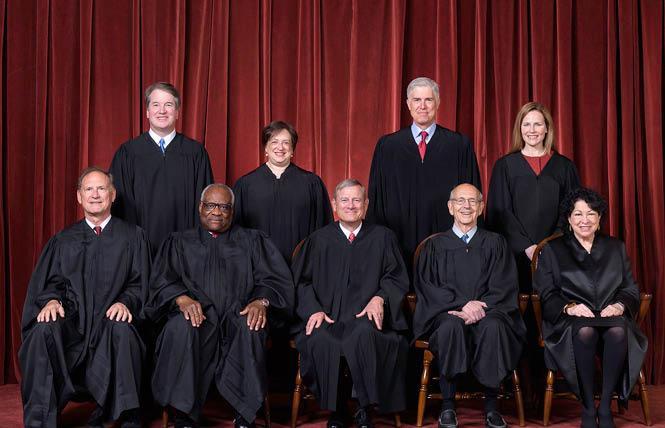 LGBTQ groups were on both sides of the conflict.

The 6-3 decision came in two consolidated appeals that pitted conservative religious groups against the state of California over the state's requirement that charities disclose the names and addresses of their major donors. The groups said the forced disclosure violated the First Amendment rights of the groups and their donors. And they noted that charities that do not comply with the requirement are prohibited from fundraising in California.

A number of LGBTQ groups and political figures filed briefs in the case. Some LGBTQ groups said the California law was important to preventing fraud; others said it could be a deterrent for people who might want to contribute to LGBTQ groups.

"We do not doubt that California has an important interest in preventing wrongdoing by charitable organizations," wrote Roberts for the majority. But he said there was a "dramatic mismatch" between the state's stated interest in preventing charitable organizations from engaging in fraud and its actual use of the donor information to prevent such fraud. And Roberts said the law requiring disclosure of major donors "can chill association '[e]ven if there [is] no disclosure to the general public.'"

At least some of the dispute over the California donor disclosure law grew out of efforts to pass Proposition 8 — the initiative to ban same-sex marriage — in 2008. Various LGBTQ activists used information about contributors to the pro-Proposition 8 campaign to target them for protests, boycotts, and bad publicity. In a similar conflict, the anti-LGBTQ National Organization for Marriage filed lawsuits in federal court in 2012, seeking to prevent the disclosure of its donor information. NOM appealed its cases to the U.S. Supreme Court and was twice rebuffed for review. (After a federal trial, Prop 8 was ruled unconstitutional; the Supreme Court in 2013 declined to review the 9th U.S. Circuit Court of Appeals ruling that upheld the lower court decision.)

Senator Tammy Baldwin (D-Wisconsin), one of the U.S. Senate's two openly LGBTQ members, joined a brief submitted in support of California's disclosure requirement, as did the lesbian attorneys general of Massachusetts and Michigan. Their argument was that "California has a clear and substantial government interest — namely, preventing fraud, self-dealing and criminal tax evasion — for requiring this limited confidential disclosure ..."

But the Human Rights Campaign, the American Civil Liberties Union, and others submitted a brief opposing the California law.

"A critical corollary of the freedom to associate is the right to maintain the confidentiality of one's associations absent a strong governmental interest in disclosure," said the brief.

"The deterrent effect feared by these organizations is real and pervasive, even if their concerns are not shared by every single charity operating or raising funds in California," wrote Roberts.

During oral argument in April, Justice Brett Kavanaugh also made note of the brief HRC had signed onto in support of the conservative groups' argument. The brief said, "If the state could categorically demand disclosure of associational information, the ability of citizens to organize to defend values out of favor with the majority would be seriously diminished."

Noting that California "oversees nearly a quarter of the nation's charitable assets," Sotomayor acknowledged that the groups challenging the disclosure requirement "have unquestionably provided evidence that their donors face a reasonable probability of threats, harassment, and reprisals if their affiliations are made public." But, she added, California's requirement "is a nonpublic reporting requirement, and California has implemented security measures to ensure that Schedule B [the list of donors] information remains confidential."

"Nor have petitioners shown that their donors, or any organization's donors, will face threats, harassment, or reprisals if their names remain in the hands of a few California state officials," wrote Sotomayor.

The dissent suggests that the majority is using a sledgehammer on a tack. While acknowledging that "it is always possible that an organization is inherently controversial," the answer, wrote Sotomayor, "is to ensure that confidentiality measures are sound or, in the case of public disclosures, to require a procedure for governments to address requests for exemptions in a timely manner. It is not to hamper all government law enforcement effort."

It was the last decision to be released before the adjournment of the Supreme Court's 2020-21 session, though the court is expected to release an orders list Friday, accepting some cases and rejecting others for review next session.

Earlier this year, the Supreme Court declined to take up a complaint from the state of Texas, seeking to sue California because of the Golden State's ban on state-sponsored travel to states that authorize discrimination against LGBTQ people. Justices Clarence Thomas and Samuel Alito issued a dissent, saying the law that triggered the bans in nine of the 11 states affected were laws "designed to protect religious liberty."

Since then, California has added more states to its "no-fly" list. On June 28, Attorney General Rob Bonta added Florida and four other states, bringing the total to 17.

Analysis: No major losses for LGBTQs at Supreme Court
Sign up!